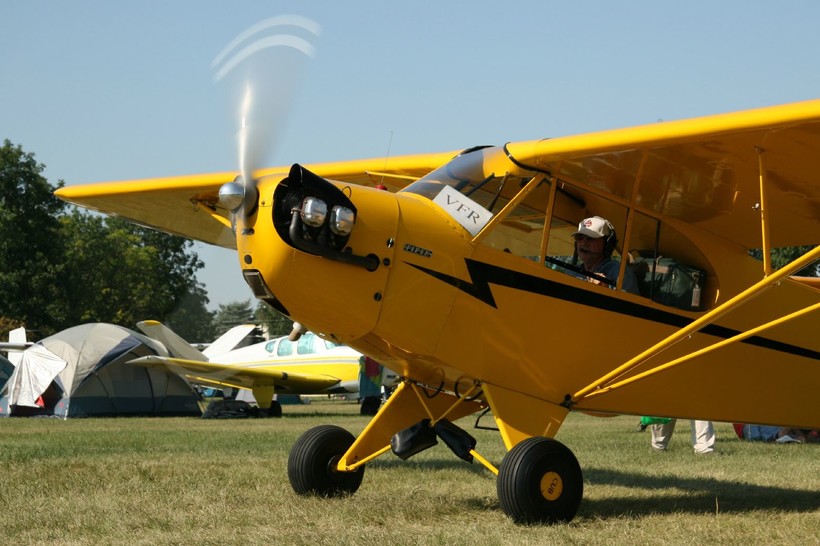 In The Market For A Small Plane? Enthusiasts Weigh In On Their Hobby's Pricetag

Thousands of small planes are parked on the grounds, proof that flying has remained somewhat affordable over the years. But it all depends on how much pilots want to spend.

One of the first slick pavilions inside the EAA gates belongs to Piper Aircraft.

"I'd say the top-of-the-line aircraft is $2.2 million, approximately," says Jacqueline Carlon, Piper's director of marketing and communication. "Then probably the entry-level aircraft is about $329,000."

She says their average, brand new plane runs a cool million. Even at that price she expects the company will get leads on three to five new customers this week.

Carlon says buyers come from all over. "We've had people from Mexico, people from Brazil, a lot of people from China and the Pacific Rim."

Piper is having one of its best fly-in weeks in several years. Granted, the average attendee isn't going to buy a million-dollar airplane.

"The average age of a general aviation airplane is almost 40 years old now," says Dave Franson, an aviation consultant, writer, and president of the Wichita Aero Club. Instead of buying a cost-prohibitive new plane Franson says most general aviation enthusiasts opt for the used route. He says an older plane can be had for roughly $20,000.

More cost is added through what he calls the three R's: refurbishing, rebuilding, and remanufacturing.

"Let's say you paid $25,000 for an airplane that's 30 years old and has some older equipment and some things you want to update," says Franson. "You could, for the price you paid for the airplane, bring it up to a pretty good example of an airplane that's able to operate nicely in the current environment."

Franson says much of the cost of new planes is in the cockpit controls which are now glass, digital and fitted with the newest electronic navigation systems.

So he says manufacturers have little incentive to build less expensive models, but that they understand their product is pricey.

"I think they all recognize that in order to keep the pilot population up you have to do a couple of things - not the least of which is make it something that's not only the purview of the rich man," says Franson.

Besides the price of a plane, pilots also have to put in a lot of time meeting licensing regulations. Then there's the $6 per gallon for fuel. But for Jeff Gehring of Slinger, it's like any other hobby: It's going to cost some money.

"Flying can get rather expensive on the high end," says Gehring. "But if you get to the affordable flying you can get an airplane for $20,000 dollars or so. You can make it real affordable."

With an eye to the future of general aviation, the EAA has a program called "Young Eagles." It sets up kids across the country with hometown pilots who give free introductory rides to someone who might be in the market for a new or refurbished plane years from now.