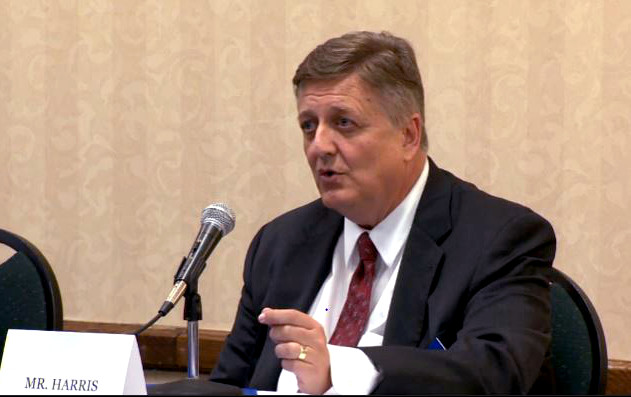 Winnebago County Executive Mark Harris said Friday that he's still running for state Senate, just hours after Republicans passed a bill that would bar him from holding both offices at the same time.

The bill that passed the Assembly early Friday morning prohibits county executives from simultaneously serving as state legislators. Republican supporters said it would prevent "double dipping" by lawmakers. Critics, however, have called it an overt political move targeting Harris, who is running for a seat being vacated by Fond du Lac Republican Sen. Rick Gudex. The district is considered a vulnerable one for Republicans, who currently hold a 19-14 majority in the Senate.

"The timing indicates what this is really about — it's about changing the rules when they think they might lose at the ballot," he said.

If Harris were to win the election and this bill were to become law, he'd have to resign as county executive 60 days after the election results are certified.

"I think their intention was to discourage me from continuing to run for the state Senate position, but I'm not easily bullied out of this race," he said.

Republican sponsors of the bill say it would prevent a conflict of interest in voting and prohibit elected officials from drawing two taxpayer-funded salaries. Harris' salary as Winnebago County Executive is about $100,000. State senators are paid $50,950 per year, plus an $88 per diem when they're in Madison on state business.

"Double dipping is wrong — take one job and be happy with it," said Assembly Speaker Robin Vos during Friday morning's debate on the bill.

Vos also pointed out county sheriffs are currently prohibited from holding office in the state Legislature. He argued the rule should logically extend to county executives.

Harris said he would, if elected, recuse himself from votes concerning Winnebago County. He also pointed out that many legislators hold another job while serving as state lawmakers.

"That was the final session for the calendar year," Harris said of the Assembly's Friday night session. "If you're going to take nine months off, it's pretty hard, right before you go, to say it's such a demanding full-time job."

Farrow left his seat in the state Senate last year about three months after being elected Waukesha County executive. Ziegelbauer served as both Manitowoc County executive and state representative from 2006 to 2013.

While the bill passed the Senate along party lines earlier this week, seven Republicans joined all Democrats in voting against it in the Assembly. Among those Republicans was Rep. Michael Schraa, who tweeted three hashtags after the vote: "#PettyPolitics, #BadGovernment, #DidTheRightThing."

Editor's Note: This story has been updated with more in-depth information about Harris' comments.