Marina To Reopen At Northern Wisconsin Harbor Destroyed By Flood

After 3 Years, Saxon Harbor Sees 'Light At The End Of The Tunnel'
By Danielle Kaeding
Share:

Work on rebuilding a northern Wisconsin marina that was destroyed by flooding three years ago is set to wrap up in the next couple weeks. Iron County expects to reopen its marina at Saxon Harbor by Labor Day weekend.

Heavy rains poured down on Saxon Harbor several years ago and the Oronto Creek became a rushing wall of water that washed boats miles into Lake Superior. Grace Hines and her husband Bill watched as a torrential downpour fell on the harbor the night of July 11, 2016.

"We just battened down the hatches and hoped for the best," Hines said.

The harbor became an island for five weeks because the flood damaged roads and bridges, Hines said, who owns the Harbor Lights bar and restaurant at Saxon Harbor with her husband. Since then, work has been ongoing to rebuild the harbor’s campground and marina that were devastated by flooding. 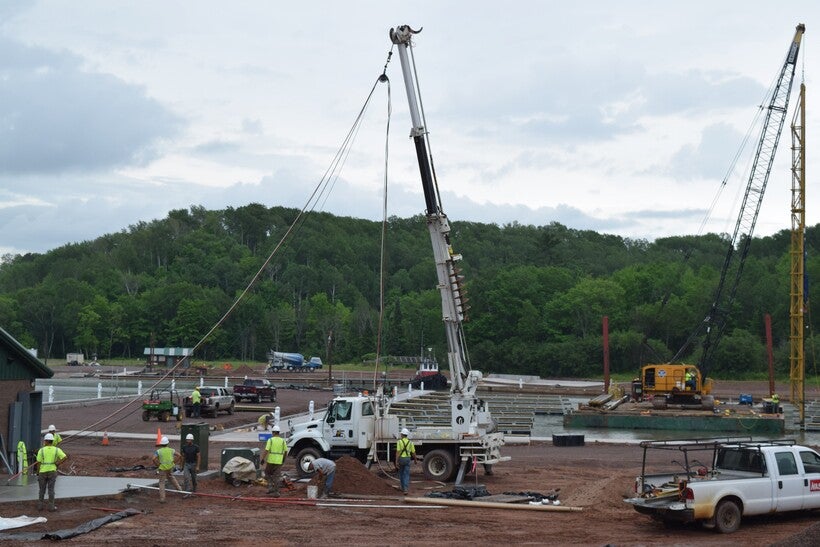 Work being completed on the marina in July at Saxon Harbor. Will Cushman/WisContext

"There’s an awful lot of people that call this their happy place, and it’s been gone for three years," said Hines. "But, there’s a light at the end of the tunnel now."

"Then, there’s just the finishing touches on pretty much everything else," he said.

The work at Saxon Harbor includes several changes to the campground and marina. Peterson noted the marina will now provide space for 81 vessels — 10 fewer than before the flood.

"The trend has been as people are buying — purchasing boats they’re getting larger," he said. "Since we had the opportunity to rebuild the marina, we tried to accommodate that as much as we could."

He added several improvements were made to make the harbor more resilient to flooding, including a concrete spillway. The sand berm that protected the marina is now lined with rip rap — or loose stone that forms a breakwater — and a bridge at the harbor was rebuilt bigger and higher off the ground.

The work to rebuild roads, bridges, the campground and marina will cost around $14 million, Peterson said. Iron County will fund around $2 million with the remaining funding coming from the state and federal governments.

Prior to the flood, around 2,000 visitors spent an average of around $83 each day in the community, according to a June 2019 assessment. Revenues from camping and boating provided around $124,000 each year for the county parks budget.

"It’s a huge economic impact to the county," said Peterson.

Construction on the campground is ongoing, and it’s not expected to open until next spring. Until then, Hines will be glad to see more faces coming back to Saxon Harbor this fall.

"There are so many people waiting for this to open again," said Hines. "They want to come home."

Editor's note: WisContext's Will Cushman contributed reporting to this story.