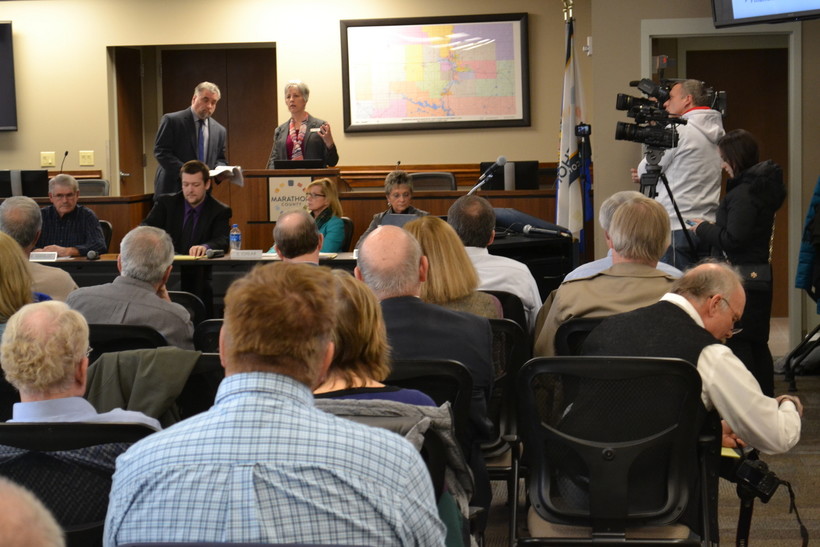 The ordinance would require a mining company to abide by state environmental regulations, pay a $50,000 application fee, and make a $15,000 contribution to a trust fund to cover possible well contamination. The company would also be required to set up buffer zones between the mine and adjacent land, and cover any legal or equipment costs incurred by the county.

Under legislation signed by Gov. Scott Walker that ended the state’s mining moratorium, the county has until July 1 to come up with its own rules before sulfide mining is again permitted. If passed, the county's ordinance runs in tandem with state law, but would be more strict.

The county is concerned about a mineral deposit containing gold in the Town of Easton, near the Eau Claire River and the Dells of the Eau Claire Park.

After hearing the public comments, members of the county Land, Conservation and Zoning Committee voted to send the ordinance back to the lawyers for insertion of even tougher restrictions against new mines.

One committee member, Jean Maszk, suggested the ordinance be rewritten to make it prohibitively expensive to open a mine near the Eau Claire Dells.

"Let's make it almost impossible to do," Maszk said in an interview after the meeting. "The Eau Claire Dells, that’s our jewel. We have to protect our beautiful jewel. If we don't have a protected resource, water, air, land, we don't have anything to pass on to our grandchildren."

Most of the speakers at Thursday's hearing oppose the mine.

"It's a sulfide deposit, and by their very nature once you expose those deposits to air and water, the chances that you get very nasty chemicals coming out of them is very high," David said.

Shannon Thielman, a Town of Hewitt resident who has done consulting work for the Wisconsin Department of Natural Resources, suggested the mining company be required to remove the ore from the site before treating it with chemicals like cyanide.

"Freshwater fish are extremely sensitive to cyanide, and we're talking about an operation that's very close to the Eau Claire River," Thielman said. "It does not take a genius to imagine what might happen."

Still, the mine had its defenders.

"Mining is both a necessary and noble endeavor. It serves our communities with taxes and economic growth. It serves our families with great primary wage-earner jobs, and it serves our world with the metals we need to be green," Quick said.

Dan Southworth, a supervisor for the Town of Easton, said the mine could produce much needed tax revenue.

"The advantages for the community would be strictly monetary, whether it be the roads, the churches, or the schools. It's an all-around win-win," Southworth said. "I’m in favor of it if the mine can be done safely."

Marathon County Board Chairman Kurt Gibbs warned about writing the revised ordinance so strictly that it would prohibit any mine.

"The way the state law was passed, if you tried to put a moratorium back on, that would be clearly challenged, and it’s a strong sense (from our legal staff) that it would be struck down," Gibbs said.

Aquila Resources, a Toronto-based mining company, has conducted exploratory drilling on the site near the Eau Claire Dells, but does not have immediate plans to open a mine there.