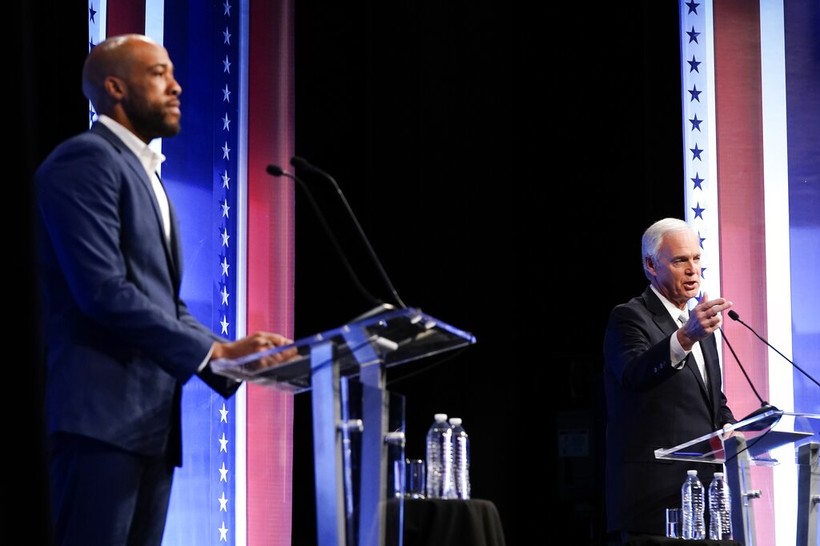 Mandela Barnes to Milwaukee Rotary: Ron Johnson is a 'threat to the stability of this country'

With one week left in Wisconsin's contentious U.S. Senate race, Democratic Lt. Gov. Mandela Barnes is telling voters Republican incumbent Ron Johnson is a danger to the state who threatens the stability of the nation. Meanwhile, Johnson has claimed the Barnes is pushing for fundamental change because he doesn't like America.

During a presentation before the Rotary Club of Milwaukee, Barnes fielded questions from a panel of reporters and members of the audience.  He was asked about a rise in political violence, including the recent attack on House Speaker Nancy Pelosi's husband in their home, and about how he would use a six-year Senate term to lower the temperature.

Barnes put the blame on former President Donald Trump who he said gave a "green light" for divisiveness that was embraced by many Republicans. He called politicians who failed to push back against Trump's comments "weak" and not deserving of public office.

Barnes brought up Johnson's comments to the Rotary club on Oct. 4 where he said it was inaccurate to call the Jan. 6 attack on the U.S. capitol an "armed insurrection."

"Jan. 6 was a real thing that most people thought they would never see happen," said Barnes. "They tried to storm the Capitol. They tried to hang the vice president."

Barnes also mentioned Johnson's connections to an attempt to get fake electors, organized by Trump's re-election campaign, to former Vice President Mike Pence prior to the insurrection aimed at blocking the certification of President Joe Biden's 2020 win.

"He's not just a danger to this state," said Barnes. "He's a threat to the stability of this country. That's who he is."

Meanwhile, Johnson has been warning supporters at rallies across Wisconsin that Barnes and fellow progressive Democrats want to fundamentally change America and "don't particularly like this country."

During the final U.S. Senate debate on Oct. 13, Johnson said Barnes "has turned against America."

Since Barnes won an all-but-uncontested Democratic primary in August, Wisconsin residents have been inundated with negative TV and digital ads about the Senate candidates.

The Barnes campaign and outside Democratic political action committees have run ads claiming Johnson wants to cut Social Security and Medicare funding for seniors and have focused on the Senator's longtime opposition to abortion.

Both men have pushed back against the attacks. Barnes told the Tuesday crowd at the Rotary club gathering that he doesn't support the Defund the Police movement and has worked with Democratic Gov. Tony Evers to increase police funding with American Rescue Plan stimulus funds.

Johnson has repeatedly said he doesn't want to cut Social Security or Medicare funding, but thinks they should be subject to annual appropriations by Congress because the programs are at risk of becoming insolvent without oversight.

Wisconsin's Senate race is expected to be close, with both parties telling supporters the contest is tied. But recent public polling has shown Johnson pulling ahead. Johnson led Barnes by between one and six percentage points in four October polls conducted by CBS News, the Marquette University Law School, CNN and Data for Progress.

Real Clear politics, which aggregates polling results, shows Johnson leading Barnes by an average of 3 percentage points, though that site lists the race as a toss-up.