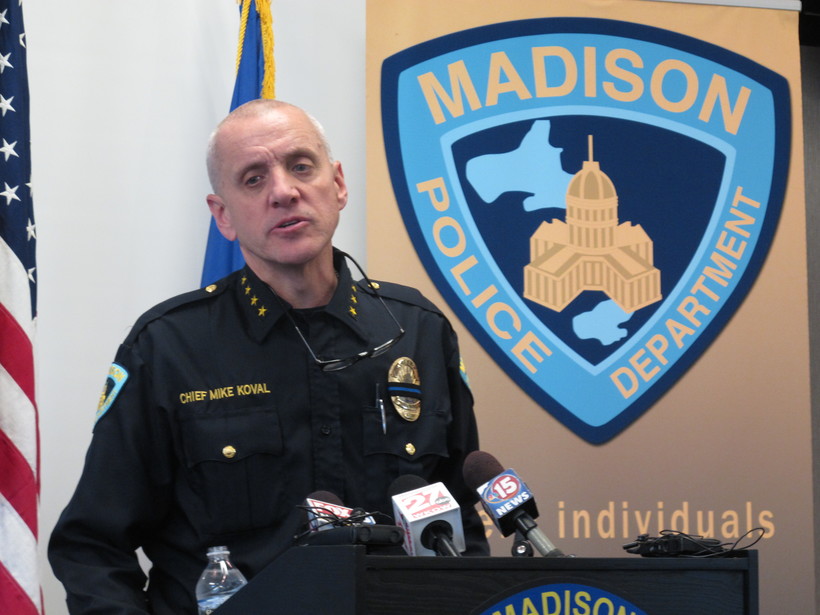 Despite Lack Of Discipline, Complainants' Attorney Says Ruling Is A Victory
By Bridgit Bowden And The Associated Press
Share:

Madison Police Chief Mike Koval has been found guilty of misconduct after he called the grandmother of a black teenager shot and killed by police a "raging lunatic."

But the city's Board of Police and Firefighters determined Tuesday that Koval does not warrant being suspended, demoted or fired. Those are the only options available to the board.

Koval has apologized publicly for the June 7 incident in a stairwell outside of a Madison City Council meeting. It was there that Koval encountered Sharon Irwin, the grandmother of 19-year-old Tony Robinson who was killed by a Madison police officer in 2015.

Irwin tried to talk with Koval in the hallway and another person suggested she make an appointment with him. Koval responded he would not do that and that she was a "raging lunatic."

The two complainants filed separate but related complaints in August, and the PFC had an evidentiary hearing in November with written closing arguments completed in January for the committee to deliberate. The Wisconsin State Journal reported the two's complaints were consolidated into one for the PFC to consider.

Al Matano, the attorney representing the complainants, including Irwin and Shandayra Kilfoy-Flores, said the ruling was a "victory."

"The commission found that the chief of police's actions violated the code of conduct, and we believe the chief should treat people with respect, especially when the citizen in question lost a loved one to a police officer's bullets, and his behavior was unacceptable," Matano said. "So, we're pleased that the commission agreed with us."

Matano suggested Koval face a one-day suspension, which Matano said would be "a good symbolic message to the chief that his behavior was unacceptable."

Koval’s attorney, Lester Pines, said the chief is gratified by the decision.

"He said that he regretted it, he testified about that, and I believe that the Police and Fire Commission accepted the apology and his acceptance of responsibility, and the rest of the complaint was dismissed out of hand," Pines said.

In a written statement, Koval said Madison Police employees are "held to high standards pursuant to our code of conduct and standard operating procedures — including the chief... I do regret my momentary lapse of self-discipline in not speaking to a citizen in a respectful way... As your chief, I remain completely committed to leading one of the best police departments in the country, to the best of my abilities."

At a press conference Tuesday, Madison Mayor Paul Soglin said he was not in a position to second-guess any decision made by the PFC and that the focus of his office is moving on and "providing the best police department in the country."

"Keep in mind the Police and Fire Commission is an independent citizen review board," Soglin continued. "Once they are selected they are completely independent and free from any political influence either by the city council or by the mayor. This is an independent review."

The PFC had no further comment on the decision.

Editor's Note: This story was last updated at 4:02 p.m. with additional reporting from WPR's Shamane Mills and Brady Carlson.