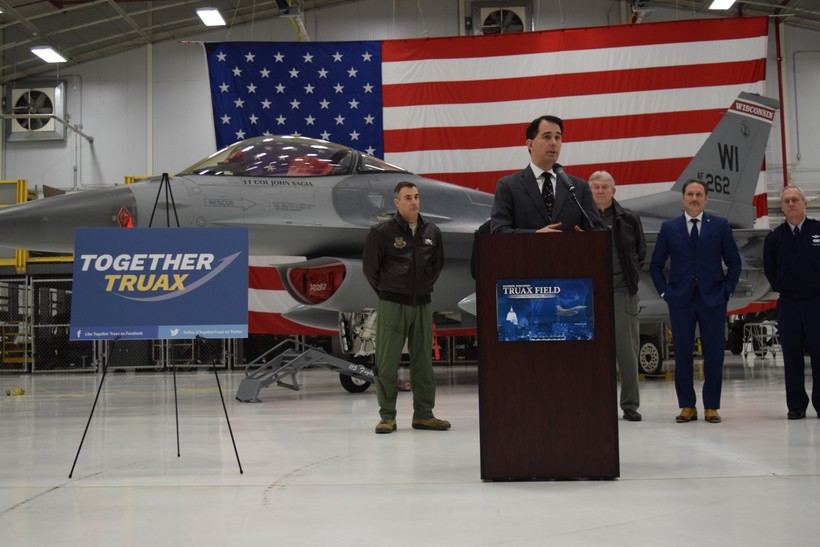 Truax Field in Madison is the military's top choice to become home to an F-35 fighter squadron.

Officials say the 18 advanced jets would be flown by the Air National Guard's 115th Fighter Wing and replace all of the old F-16 fighters currently based at Truax Field.

Madison beat out other locations considered by Defense Department in Idaho, Florida, and Michigan.

The Dane County Regional Airport's selection as a top choice means the military will conduct an in-depth environmental impact study and gather public comment before making a final decision. A base in Alabama is the military's second choice.

The planes could arrive in Wisconsin in 2023, according to the Air Force.

Madison political and business leaders campaigned to win the F-35s as a way of preserving the economic benefits from the base, which employs 445 people full-time.

Zach Brandon, Greater Madison Chamber of Commerce president, said Madison being selected will maintain 1,200 jobs at the base and benefit the entire state.

"Basing the F-35s in Madison one continues a strong tradition and legacy of Madison as an Air Force town, but also it creates economic certainty for the decades to come," Brandon said.

Critics of the plan cite noise concerns from having new fighter jets in the city. Ed Blume organized a group opposed to the new jets. He said these new jets won't create new opportunities.

Gov. Scott Walker disagreed saying he lives near the airfield and the disruption is minimal.

Walker shared his excitement for the announcement on Twitter and also made comments Thursday afternoon at a press conference at Truax Field.

The @usairforce has just announced that Wisconsin’s 115th Fighter Wing at Truax Field is a preferred base for the F-35A pic.twitter.com/K44btvDZks

Wisconsin’s 115th Fighter Wing at Truax Field was selected as one of the preferred locations for the @usairforce F-35A Lightning II. More great news for our state! https://t.co/NNjCVyHaJR pic.twitter.com/lmd6H4Bsrg