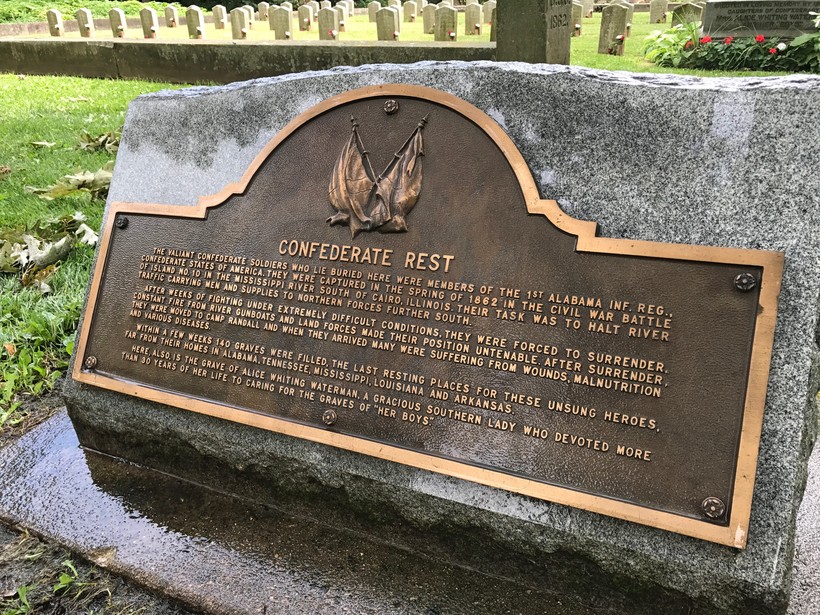 Photo courtesy of the City of Madison Parks Division

Madison Mayor Paul Soglin issued a statement Thursday after making the decision to remove the two monuments Wednesday. Soglin said the city has been discussing the removal of the monuments for a year. Citizen concerns were outlined in an Isthmus article Wednesday before the monuments were removed.

A plaque known as the Confederate Rest, is the smaller of the two memorials and was taken down Wednesday night. It was placed in 1981, according to the Isthmus.

The soldiers died at Camp Randall as prisoners of war.

The second monument, which Madison Parks Spokeswoman Ann Shea wrote in an email is significantly larger, has not been removed, "but will be as soon as possible." Mayor Soglin said language honoring the Civil War insurrection will be removed in a way that does not disrespect the dead.

"We will replace a portion of that monument listing the names of those deceased soldiers. That will not be lost," Soglin said.

The large stone monument lists the names of deceased Confederate soldiers, and says it was "Erected in loving memory by United Daughters of the Confederacy to Alice Whiting Waterman and her boys," the Isthmus reported.

The large stone monument lists the names of deceased Confederate soldiers, and says it was "Erected in loving memory by United Daughters of the Confederacy to Alice Whiting Waterman and her boys." Photo courtesy of the City of Madison Parks Division

The city was urged to remove the memorials as many cities nationwide are taking down statues of Confederate leaders.

"There's no excuse for using city property to publicly venerate soldiers who fought to divide the country and who fought to preserve the institution of slavery," he said.

Last weekend in Charlottesville, Virginia, a rally of white supremacists turned violent as they and counter-protestors clashed. One woman was killed when a man drove his car into the crowed and two troopers assigned to the governor's travel detail were killed in a helicopter crash. Soglin said the weekend's events led to a Monday staff meeting over the removal of the monuments.

The removal of the monuments "has minimal or no disruption to the cemetery itself. "There is no disrespect to the dead with the removal of the plaque and stone," Soglin said in a statement Thursday.

"The Civil War was an act of insurrection and treason and a defense of the deplorable practice of slavery. The monuments in question were connected to that action and we do not need them on City property. Taking down monuments will not erase our shared history. The Confederacy’s legacy will be with us, whether we memorialize it in marble or not. I agree with other mayors around the country also speaking out and taking action. We are acknowledging there is a difference between remembrance of history and reverence of it."