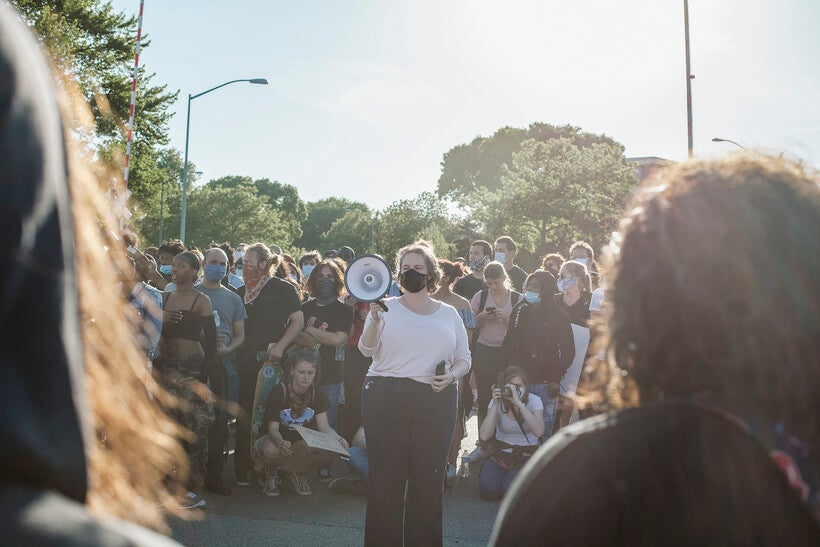 Madison Mayor Satya Rhodes-Conway addresses a group of protesters in Madison, Wis. on June 1, 2020. Rhodes-Conway asked protest leaders to consult on a police oversight commission, but the crowd didn't appear to be won over by her statements. Many in the crowd yelled about why Officer Matt Kenny is still on the force. Kenny shot and killed Tony Robinson, an unarmed black 19-year-old, in 2015. Keni Rosales/WPR

Madison is trying to confront two very difficult public health threats simultaneously: escalating gun violence and a surge in COVID-19 cases. Both come as the city implements a new mask policy and searches for a permanent police chief, all while Madison Mayor Satya Rhodes-Conway faces a possible recall.

A recall petition was filed by Jon Rygiewicz, a 38-year-old hotel manager, on Wednesday. He has 60 days to collect more than 36,000 signatures for the process to move forward.

Rygiewicz wants Rhodes-Conway removed from office in part because of her response to recent incidents when demonstrations turned volatile, including the attack of state Sen. Tim Carpenter, D-Milwaukee.

In a Facebook post for the effort, Rygiewicz wrote Rhodes-Conway "has assisted in causing a public safety crisis, lied to the public in multiple statements, she ignores the citizens concerns, there are serious concerns of inadequate staffing due to resignations within her office, she did not attend meetings her herself scheduled, she pushed through a very questionable and highly expensive wheel tax without consent."

The mayor's response to the recall didn't address safety specifically.

"I'm focused every minute of every day on doing the job that the people of Madison elected me to do. We are working on a number of things in service of our community," Rhodes-Conway said during an online press briefing Friday.

Both Rhodes-Conway and Acting Chief of Police Victor Wahl have been criticized for how protests against the death of Minneapolis man George Floyd while in police custody and ensuing demonstrations against police brutality and racism were handled, with dual calls for less force against demonstrators and better protection for businesses that were vandalized.

"I understand it's been difficult to work through the pandemic, but I think its only fair to the interim chief and to the department and the city that we move forward with this search process as expeditiously as possible," Rhodes-Conway said.

The search for the key position comes as the city tries to tamp down a surge in new coronavirus cases by closing indoor service at bars and implementing a new mask policy. On Monday, July 13, anyone 5 years old and older will be required to wear face masks indoors. They won’t have to do so when eating at a restaurant or while at home, but will be required to when visiting someone else’s house. The order also requires masks in businesses, health care settings and on public transportation.

Public health officials say they're working to inform the public of the change but will enforce noncompliance if public education doesn’t work first. If a citation is issued within the City of Madison, the ticket amount would be $376, if it is issued outside Madison the county ticket would be $263.50.

Also on Friday, Chief Wahl, spoke about an increase in gun violence in Madison.

In the last week and half, there have been two fatal shootings, eight homes hit by bullets and seven cars struck by gunfire, Wahl said during the online press briefing. The number of shots fired increased 80 percent from April through June of this year compared to last year he said.

"Gun violence is unacceptable and should not be tolerated in our community," said Wahl. "I urge all stakeholders — community leaders, clergy, elected officials, nonprofit organizations — to speak out ... denounce this rise in gun violence and work in partnership with MPD to find meaningful and collaborative strategies that will lead to a more peaceful city."