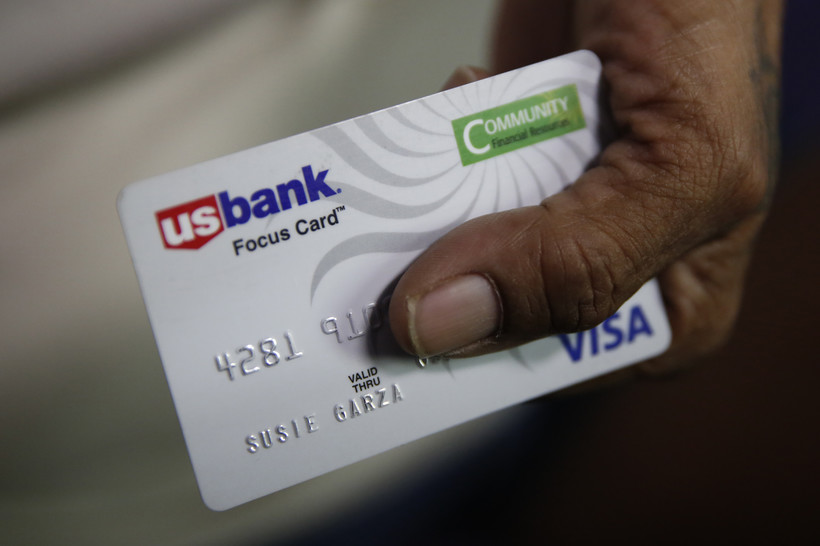 In this Aug. 14, 2019, photo, Susie Garza displays the city provided debit card she receives monthly through a trial program in Stockton, Calif. A study of people in California who received $500 a month for free says they used it to pay off debt and get full-time jobs. A pair of independent researchers reviewed data from the first year of the study and released their finding on Wednesday, March 3, 2021. Rich Pedroncelli/AP Photo

Madison guaranteed income experiment is up and running

A program designed to test the effects of monthly no-strings-attached payments is up and running in Madison.

A total of 155 Madison families are getting the payments over a 12-month period from a pool of $930,000 that was raised by private donors. Families with a child under 18 and a household income at less than two times the federal poverty were eligible to apply. That amounts to no more than $36,620 in annual household income for a family of two or $55,500 for a family of four.

That threshold allows people to participate even if their income isn't low enough to qualify for many government benefit programs, Roberts Crall said.

"Having that level that's slightly above the poverty level was really important because everybody needs help with inflation." she said. "Child care is extremely expensive in Wisconsin and (with) wages being low, we know that it's not just people at the bottom that need help. ... They're the people that are kind of falling through the cracks because they can't get other benefits."

And families can spend the money on whatever they choose, which is unlike the income-based government assistance programs that restrict payments to specific needs like housing or food.

"We know that our needs change from month to month," said Roberts Crall, who works at the Institute for Research on Poverty at the University of Wisconsin-Madison. "So one month, it might be that families need a little bit of extra cash to pay for gas and the next month, it might be for rent and the month after that it might be for diapers or school supplies. And so giving people that flexibility to be able to manage their own budget seemed really important and (an) important idea to test."

City officials are partnering with UW-Madison's Institute for Research on Poverty and the Center for Guaranteed Income Research at the University of Pennsylvania to compare outcomes for families getting the payments to those in a control group. Participating households got debit cards to receive the payments, and researchers plan to study how people spent the funds (which will published as broad categories) as well as how the payments affected overall wellbeing, Roberts Crall said.

Madison Mayor Satya Rhodes-Conway belongs to a coalition called Mayors for a Guaranteed Income, which advocates for direct, recurring cash payments to people across the country. The idea is that creating an income floor will help people meet their basic needs so they can climb out of poverty.

"My hope is that a growing group of mayors will lead the way on educating people about the concept, and engage in pilot programs to demonstrate that households really do make wise choices and are best positioned to navigate their way out of poverty," Rhodes-Conway said in a statement.

The related concept of universal basic income — in which all Americans would get recurring payments regardless of need — gained prominence when Democrat Andrew Yang included it as a plank of his failed 2020 presidential campaign.

Related Links:
Madison to provide a guaranteed income to 155 families for one year