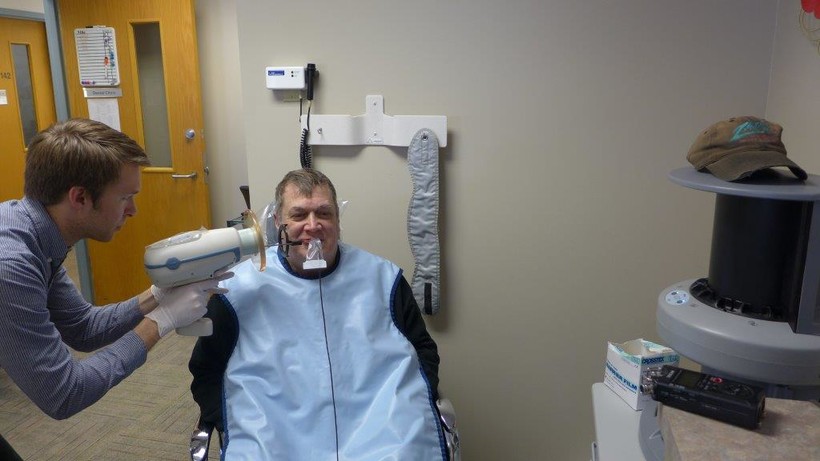 A portable x-ray machine is used at Madison Dental Initiative where patient Frank Marshall had a tooth pulled and others repaired.

Part Of Goal Is To Keep People With Tooth Pain Out Of Emergency Rooms
By Shamane Mills
Share:

This year, 54-year-old Frank Marshall did something he'd never done before: He went to a dentist.

Marshall stays at a local homeless shelter, and said he had been experiencing tooth pain for about a month. Then, through his shelter, he heard about the Madison Dental Initiative — an organization that connects those who can't afford dental care with area dentists. It's part of a broader effort in Madison to improve access to care for such people, all the while reducing the number of patients with tooth problems in emergency rooms.

"They pulled a tooth a few weeks ago, and now they're going to do cleanup work on cavities," said Marshall.

MDI Executive Director Aaron Warren said about a thousand children and adults were seen last year by 40 area dentists through the organization.

"They volunteer anywhere between four hours on the low end per month, all the way up to 20 hours. Then we have a remaining 11 who see patients at their own offices," said Warren.

The clinic now has three dental chairs. It started five years ago with just one. Back then, the clinic was just for emergencies, open only on Thursdays.

"Thursday has always been the day of getting people out of pain," said Warren. "So we have our normal business hours, but Thursdays are our 'extreme dental day,' I like to call it. We start seeing patients in the evening at 6 o'clock, and we don't leave until the last patient is done."

Debra DeNure is a dental health coordinator with Public Health Madison & Dane County. She and others have been working to divert patients with dental pain who come to the ER.

"It's a big cost and it's a poor use of the resources there — unless someone is to the point of being really urgent, in which case that's exactly where they should be," she said.

ER doctors aren't dentists, and DeNure said it isn't only patients who are in distress when someone comes in with tooth problems.

"When someone comes to you for help and you cannot provide treatment that is going to take care of the real problem that someone has come to you for, it's a horrible feeling, because your whole purpose it to make sure someone is not suffering," said DeNure.

DeNure and others have also set out to standardize how dental patients are treated in the ER — for instance, what antibiotics are best for infected teeth and what pain medication should be used.

"And one of the things that we wanted to do was decrease the amount of opioids or opiates that are in our community. Research has shown that is not the best medication. There are other things that work better — ibuprofen," said DeNure.

The ongoing effort to standardize tooth care in the ER and divert those patients to more appropriate, less-expensive care appears to be working. DeNure said that in 2002, there were about 1,530 dental patients at four emergency rooms in the Madison area. Eight years later, such cases had surged by 2,549. But last year, the numbers dropped to 1,981.

"You can't say that it's one thing — there's all kinds of variables," said DeNure.

However, she said that MDI seems a likely driver of the trend, pointing to how much it's grown over the last few years.

"During the last two years they have put out their information to the ERs and said, 'If you have someone who has dental pain and they don't have a dentist, you can have them call MDI,'" said DeNure.

DeNure also credits federally funded clinics in the area in helping divert dental patients from emergency rooms. But often there's more demand than supply, and DeNure said people in need don't know which doors to knock on to find one that will open up.

Correction: The audio file originally included in this article was for another Wisconsin Public Radio News story. The correct audio has since been uploaded.