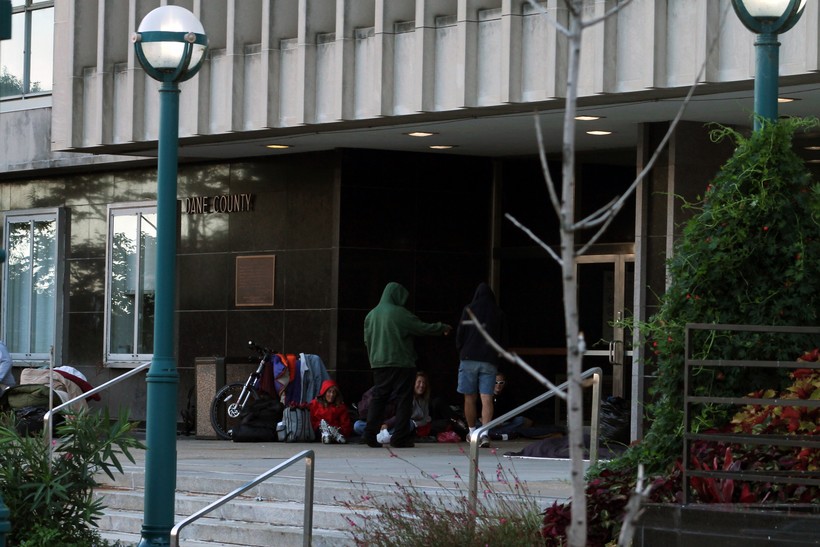 The Madison City County building is a popular place for homeless people to congregate and sleep.

Madison Finds No Easy Answers For Homelessness In Public Spaces

The front steps of the Madison City County building have long served as an unofficial homeless shelter. But starting Oct. 1, people will be banned from sleeping there, and additional restrictions on Madison's homeless might be on the way.

That's not welcome news to Robert Morrison, who has slept outside the building for three months.

"It's like a safe haven right here," he said on a recent afternoon, he and his belongings sitting alongside other piles of luggage that dot the front steps, kept dry beneath the building's canopy.

City officials passed the ban on overnight sleeping at the municipal building in early September, citing threats to employee safety because of violent fights that have taken place on the steps.

What's more, these restrictions on the homeless might extend from that particular property to sidewalks and street benches.

In late July, Madison Mayor Paul Soglin introduced the Downtown Pedestrian Protection Ordinance. The current version of the proposal would restrict people from sitting on sidewalks downtown between 5:30 a.m. and 1 a.m. It would also make it illegal to store property on city benches.

But Madison's Common Council President Denise DeMarb doesn't back the plan, which is up for a vote on Oct. 6.

"I don't think we should have this ordinance, period," said DeMarb. "It's punitive in nature. It tells people what they can't do but it doesn't give them the option to do anything different."

The ordinance would only apply to the downtown area and a part of the University of Wisconsin-Madison campus, which DeMarb said "will simply push them out into the neighborhoods — and nobody's going to want that either."

"We're dealing with our most vulnerable residents, the homeless. If we tell them they can't sleep here or sit here then they're going to move somewhere else," she added.

Five city committees and commissions have weighed in on the ordinance. All but one voted down the proposal.

"It's clear indication that the city's not interested in taking this heavy-handed conservative approach," said Maurice Cheeks, who serves on two of those committees.

Soglin turned down Wisconsin Public Radio's request for an interview. However, he did discuss the ordinance at a press conference last month, where he dismissed claims that the ordinance could be considered unconstitutional.

"The U.S Justice Department did not take a position that banning a person from a public place is unconstitutional," Soglin said. "They said it's unconstitutional if there is no place to sleep."

While the city has a number of homeless shelters, they only let in people who are sober. Many of the homeless downtown suffer from drug and alcohol addiction.

The county began construction on a 60-unit apartment building this summer. It's a so-called "housing first" project that would provide studio apartments for homeless adults in need of mental health and substance abuse treatment. The apartments are set to open in early 2016.

For Robert Morrison, who currently calls the steps of the City County Building home, there's no plan for where to go when the ban goes into effect, but he said he won't be moving far.

"I love it here. And I plan on staying here," he said.

And Morrison said he'll be returning to the building on Oct. 6 to sit in on the Common Council vote on the Downtown Pedestrian Protection Ordinance.