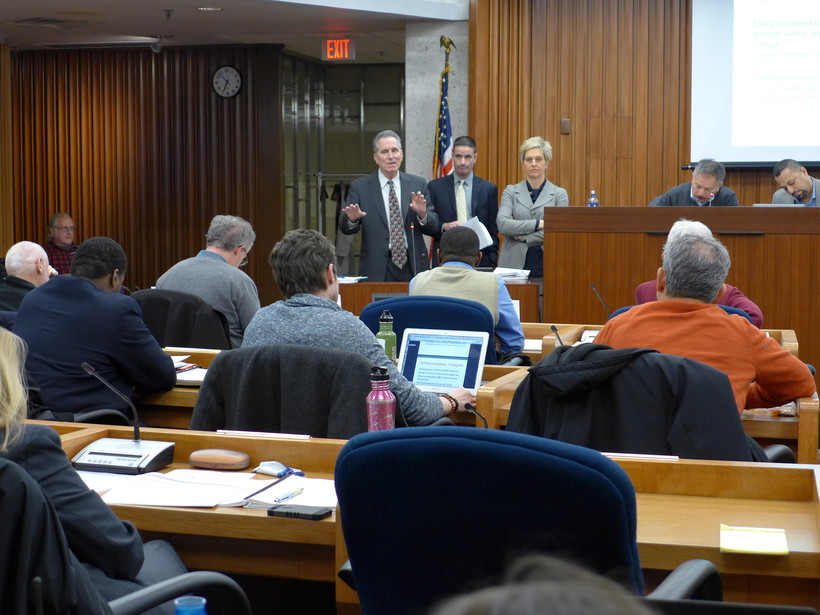 Report Questions If Department Meets Its Own High Standards
By Bridgit Bowden
Share:

The Madison City Council and a citizen police review committee met Thursday to hear the findings of a year-long study of the Madison Police Department’s policies and procedures completed by an independent consulting firm.

While the report, released Dec. 14, states MPD is "far from a department in crisis," it challenges the department to reflect on if it's actually the model it says it is. The question, "Are we who we say we are?" is present throughout the report. The MPD has a reputation for being a progressive department, and claims to be committed to the "community policing" model, which relies on a problem-solving approach to traditional policing.

The MPD has many officers and employees who are passionate and dedicated to the city, said Stephen Connolly, a consultant for the California-based OIR Group, an independent police oversight and review firm.

But sometimes that passion has a downside, Connolly said, noting a tendency to "shift into an adversarial mode" when confronted with criticism. He said the department's claim to be a model department is "not empty rhetoric ... but that doesn’t mean that it’s translating into the day-to-day reality."

The report includes 146 recommendations "intended to improve policies and practices of the police department."

According to another OIR Group consultant Michael Gennaco, the most important of the 146 recommendations is to hire an auditor for the department. This person would report to an appointed community review board and would provide oversight for the department on things like citizen complaints and use of force. Hiring an independent company like the OIR Group every few years isn’t feasible, said Gennaco. But a police auditor "could and should fill the role that we sort of did," he said.

The group is also recommending that the department learn the degree to which officers actually practice community policing. Right now, officers aren’t required to complete a daily activity log, so it’s hard to determine how much of their time is actually devoted to this principle, which the department claims to champion.

"This stated adherence to lofty principles is obviously commendable," the report reads. "However, there is a paucity of data about what officers are actually doing in the field."

"Traditional policing is captured very easily," Gennaco said at the meeting Thursday. "Because when you arrest somebody, when you cite somebody, there is a paper trail."

There's not currently a way to track when officers are using community policing tactics, he said.

The report also states the department should implement a formal evaluation process for all employees, including the police chief. Right now, there is no annual performance evaluation for members of the department.

The report also recommends a "complete overhaul" of internal investigations after officer-involved shootings, with the goal of minimizing use of deadly force.

"Along with the authority to use force comes a great amount of responsibility," said Julie Ruhlin, an OIR Group consultant. "There is force that is legally justified but perhaps not totally necessary."

The report states the MPD defends its officers who use deadly force "to the hilt," noting that this tendency is "in contrast to the approach of many other leading agencies."

Officer Matt Kenny, who killed Robinson, was cleared of any wrongdoing by an MPD internal review and by the Wisconsin Department of Justice’s Division of Criminal Investigation. He is still employed by the department. Since 2014, state law has required that all officer-involved shootings be investigated by an outside agency, like DCI.

The report recommends the department host town halls or listening sessions after officer-involved shootings and other controversial events in order to give the public a chance to voice their thoughts and feelings about such incidents. In the same vein, it recommends that the department develop a body camera policy with input from the community. Madison Police officers currently don't have body cameras.

Some of the 146 recommendations in the report include:

The study follows the 2015 fatal shooting of Tony Robinson, an unarmed black 19-year-old, by a Madison Police officer.

After the group's presentation Thursday night, alderman Mark Clear said he thinks it was worth it the cost. "I think it was expensive, and I think you justified that expense," he said.

The police department is working on a response to the recommendations, and is expected to respond within the next two or three weeks. The citizen police review committee, which was set up following Robinson's death with the goal of finding a firm to conduct such a study, will continue to meet.

Earlier this week, the city council’s finance committee recommended funding for eight new MPD officers. Some critics of the department have asked that for the council to wait until after it takes action on the OIR Group recommendations before approving the additional officers. The OIR recommendations do not include anything about department staffing.