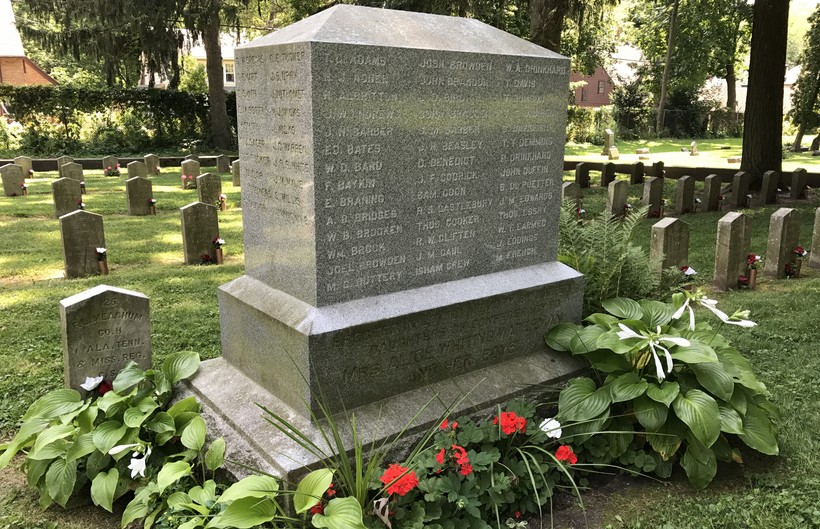 The Madison City Council voted Tuesday to remove a controversial, century-old Confederate monument in Forest Hill Cemetery, overriding the city's Landmarks Commission, which called for the monument to remain.

Council members voted 16-2 to overturn the commission’s ruling that barred the removal of the monument. It lists the names of about 140 prisoners-of-war buried in an area of the cemetery known as Confederate Rest.

"Undoubtedly, this is the right thing to do," said Alderman Maurice Cheeks, who voted in favor of the motion.

But members of the council and public debated the role of public space, as well as questions of historical preservation, white supremacy and present-day inequality.

Alderwoman Sheri Carter supported relocating the monument from its Forest Hills location to a museum.

"You don’t have discussion in a cemetery," she said. "You have reflection and you have memories, and this brings up memories that are not so pleasant in our history."

The plan is to move the monument to a museum in Madison.

Those opposed to the cenotaph say it does not belong in the public cemetery because it glorifies rebel soldiers who fought for slavery and symbolizes white supremacy. The Daughters of the Confederacy purchased the statue in 1906. In the early 20th century, they and others promoted the myth of the "Lost Cause" by erecting statues and monuments to rebel soldiers throughout the country.

"Our past does direct our future," said Alderwoman Barbara Harrington-McKinney, who voted to remove the stone. "It grieves me that we are struggling with whether (the monument) should be removed or not."

The two council members who voted to keep the cenotaph, Alderman Paul Skidmore and Alder Michael Verveer, did not speak much during the debate. The most vocal opponent to its removal present at Tuesday night’s hearing was David Blaska, a resident who had previously submitted emails stating his position.

"I don’t know what’s glorifying about it," Blaska said. "It’s a gravestone."

Later, Blaska countered remarks others had made about the current effects of the monuments’ presence. "I don’t know how Madison’s been damaged by this storm," he said. "I don’t know of any rallies, Klan rallies or otherwise, that have been held there."

But Landmarks Commission Chair Stu Levitan and others traced the symbolism of the monument to present-day racism in Wisconsin and throughout the country.

"There are white supremacists in our federal government and klansmen in our streets, things that might have been acceptable before Charlottesville are no longer OK," Levitan said. "Rebel soldiers who fought to preserve slavery should have their graves respected, but they are not entitled to a large marble monument in Madison's municipal cemetery."

Levitan and his commission rejected attempts to remove the statue previously. At Tuesday’s meeting, he announced he was present "to defend the honor of the landmarks commission" and explain why they had "no choice" but to do so, because their mandate was to determine historical appropriateness. From a societal perspective, Levitan urged the council to vote to remove it.

Alderman Arntsen said the council’s duty is to determine "what’s the best public policy for this city." In this case, he saw that as removing the statue.

"The biggest issue this city faces, and has faced for really since I’ve been involved in public policy issues, is the issue of racial equity and inclusiveness," Arnsten said. He saw removing the monument as part of the fight against injustice.

That fight is far from over, however, reminded Alderman Cheeks, who said removing the statue was "undoubtedly" correct.

"There are no victory lap after this, right? This isn't the sort of thing that we'll go pat our backs on for having changed inequality in our city," said Cheeks. "We will continue to be a city with a tremendous amount of work in front of us to shrink inequality between haves and have nots, and between blacks and whites, between marginalized communities and those that are not (marginalized) in this city."