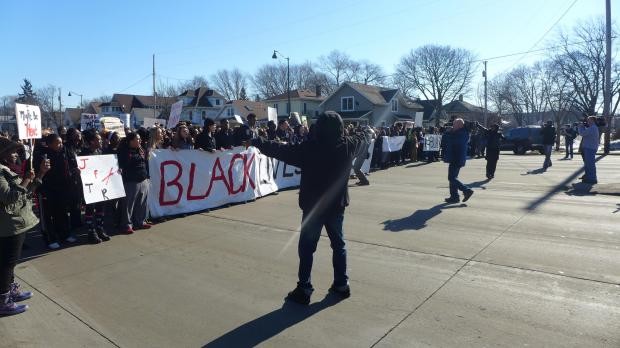 One of the protests held in Madison in the days following the Tony Robinson shooting.

Young Gifted And Black Group Says Day Should Be Used For Reflection
By Erik Lorenzsonn
Share:

A Madison-based black rights coalition say they will not organize protests on Tuesday to correspond with the Dane County district attorney's announcement in the Tony Robinson shooting case.

The group Young Gifted and Black said in a press release on Monday that its decision to not protest was made out of respect to the wishes of Robinson's family.

"We call community members to use Tuesday to remember Tony and reflect on the complex ways state violence impacts (black) lives," the release read.

Robinson was a 19-year-old black man who was fatally shot by a white Madison police officer in March. Dane County District Attorney Ismael Ozanne said this weekend that he will reveal his decision whether to press charges against the officer during a news conference on Tuesday.

Officials with the group said in press release that the group will stage protests on Wednesday as part of "Black Out Wednesday," a national black rights event.