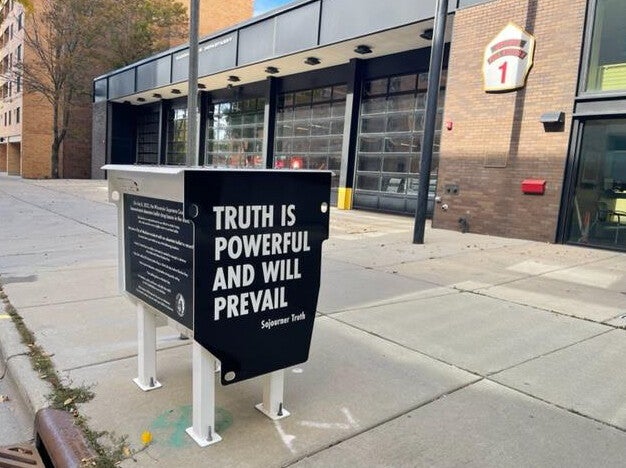 In the wake of a controversial Wisconsin Supreme Court decision in early July that banned absentee ballot drop boxes, Madison partnered with a New-York based artist to turns its 14 boxes into art installations with information on how to vote and return an absentee ballot.

Photo courtesy of the City of Madison, Mayor's Office

The public art project arms voters with information on where to drop their absentee ballots ahead of election day.
By Gaby Vinick
Share:

Out of a job, the absentee ballot drop boxes in Madison, Wisconsin have gotten a makeover.

In the wake of a controversial Wisconsin Supreme Court decision in early July that banned absentee ballot drop boxes, the city partnered with New York-based artist Jenny Holzer to post messages on its 14 boxes with information on how to vote and return an absentee ballot.

"We felt like, rather than remove them, we wanted to transform them, and to use them as a space for public art, to perhaps spur dialogue, and maybe even to hold space for a future in which we might be able to make a better decision as a state to increase access to voting rather than limiting it," said Mayor Satya Rhodes-Conway.

The court effectively outlawed the drop boxes in a 4-3 conservative majority decision. It also ruled that voters must personally bring their completed ballots in-person to the clerk's office without any other person's help.

The conservative Wisconsin Institute for Law and Liberty (WILL) filed the lawsuit that led to the court's decision. WILL argued that drop boxes are not allowed under state law, and it is illegal for another person to return a voter's ballot by mail or the clerk's office. The court ruled that voters must deliver absentee ballots individually to their clerk office, but it did not address if that applies to voting by mail. 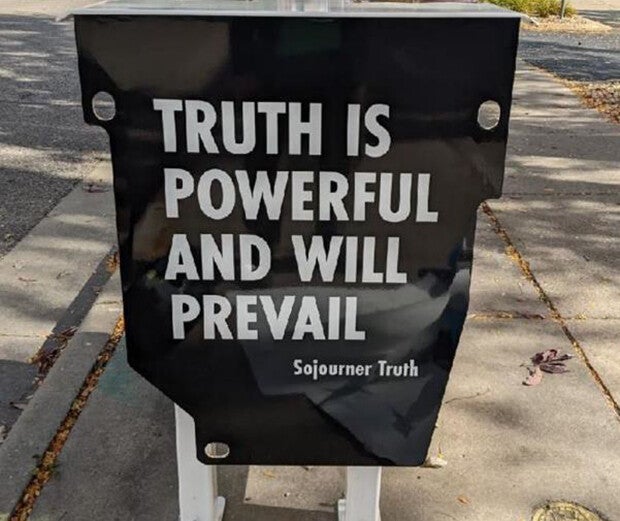 Madison transformed its drop boxes into art installations with a quote from Sojourner Truth saying, "Truth is powerful and will prevail." The project is also taking a poke at the supreme court decision, calling it "a step backward." Photo courtesy of the City of Madison, Mayor's Office

The public art project intends to inform voters of the recent change to absentee ballot voting and arm them with resources ahead of the midterm elections on Nov. 8. The project also takes aim at the false claim that the 2020 presidential election in Wisconsin was stolen through fraud, and at the court's decision itself.

The drop boxes read: "This decision is a step backward in our efforts to make it easy, safe, and secure for every eligible voter to cast their ballot."

They also carry a quote from Sojourner Truth: "Truth is powerful and will prevail."

"I think there are two important messages – one, in the face of the big lie, we are putting out a message about the truth. And two is that despite the state taking options away, there are still many ways to easily and safely return your ballot for the next election,'' said Rhodes-Conway.

"Drop boxes were a solution to that – you cut the post office out of it and deliver it yourself in a secure location monitored by the clerk's office," he said.

Unlike other states, ballots that arrive late are not counted in Wisconsin.

The message on the dropbox reminds voters of this fact, warning they must mail their ballot through the U.S. Postal Service in time for it to be delivered before Election Day or drop it off at the city clerk's office by Nov. 7. Other options are to participate in in-person absentee voting during early voting or to go directly to a polling place on election day.

Madison is following the new rules that ban drop boxes. But McDonnell said he still disagrees with the Supreme Court decision.

"I don't know what the difference between a dropbox and a blue mailbox are really. So it just seems sort of like a partisan effort," he said. "And from my point of view, there's nothing prohibiting drop boxes in the law. There's no accusation that anything happened with them. So I think it's just sort of a victim of our current environment."

He said some people have asked and complained about why the drop boxes are still out there if they are no longer used.

"Because they cost us a lot of money. And who knows what will happen two years from now," he said.