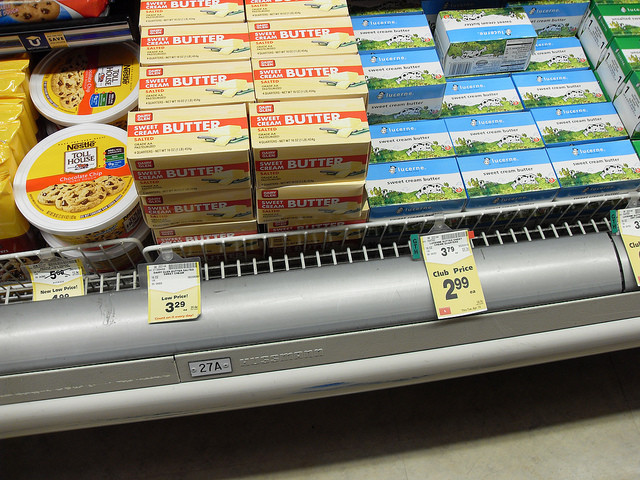 Thanks to recent research suggesting it’s not as unhealthy as people once thought, butter has been rising in popularity. Photo: Paul Swansen (CC-BY-ND).

Low Inventory Is Due To Increase In Butter Exports
By Noah Ovshinsky
Share:

The nation’s butter inventory is much lower than it usually is at this time of year, which could mean higher prices for consumers.

Thanks to recent research suggesting it’s not as unhealthy as people once thought, butter is back in vogue. Unfortunately, butter stocks are low, especially when compared to the last few years. Dairy economist Mary Keough Ledman said higher exports are behind the drawdown.

With milk plentiful, spring is usually the time when the industry builds up its butter supply. Ledman said low inventory now will likely translate into higher prices later.

“More than 40 percent of our butter consumption occurs in those fall months like September, October, November, December,” she said. “They are really the key draw for consumer demand, and quite frankly we’re going to have higher prices than a year ago.”

The dairy industry may know demand will pick up around the holidays, but that doesn’t mean it will produce more butter.

“There could be a reallocation of milk away from the production of other dairy products in order to increase the stocks, but that would mean that there would be less supply of those other products and those could go up (in price) as well,” said Brian Gould, an agricultural economist at University of Wisconsin-Extension and a professor in the Department of Agriculture and Applied Economics at UW-Madison.

Gould said higher butter prices are part of trend seen elsewhere in agriculture. He notes that consumers are also paying more for pork and beef at the supermarket.