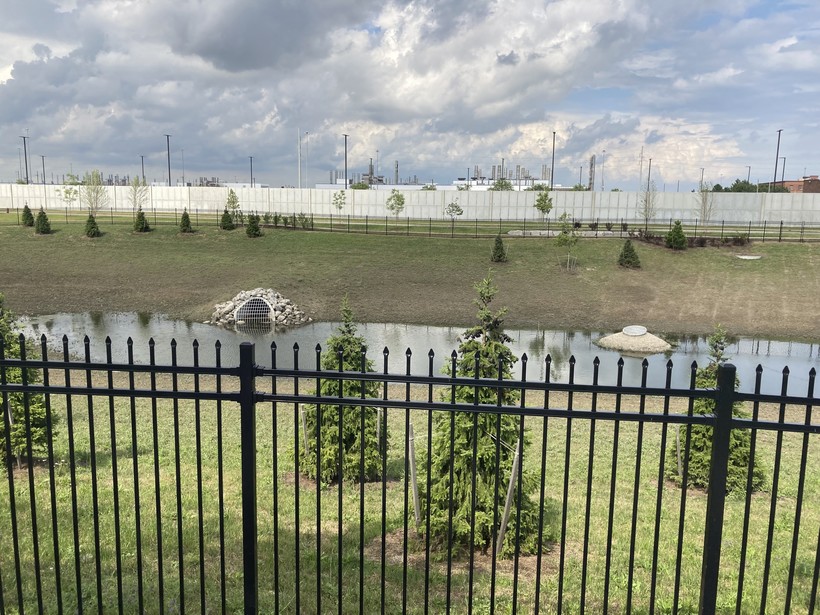 A retention pond at a stormwater park near the new Stellantis Detroit Assembly Complex on the city's east side is shown June 30, 2021. The park is a greenspace reconfigured to filter rainwater runoff before it flows into sewer systems. Corey Williams/AP Photo

Low-Income Communities Have Fewer Trees, And Climate Change Is Pointing Out That Disparity

Just by flying over certain cities, it's easy to spot the wealthy ones. They're the communities with lots of trees.

That's according to Ian Leahy, vice president of urban forestry at American Forests, the oldest national nonprofit conservation organization in the United States. Low-income cities, such as Milwaukee, aren't tree-heavy, and it's causing issues specifically related to climate change.

On the ground in Milwaukee is Breanne Plier, manager of sustainability at the Milwaukee Metropolitan Sewerage District, whose office has had to face the realities of what warming temperatures and erratic weather does to the city's sewer system.

But Milwaukee is involved in green initiatives to help mitigate some of these issues. For example, planting trees help soak up stormwater, which in concrete-laden urban cities has nowhere to go and ends up overflowing the sewage system.

"Also things like bioswales and rain gardens and constructed wetlands to take some of that water that is falling on the land surface and help capture it before it can get into our sewer system," she said.

"During the day, it can be 5 to 7 degrees on average, but at night it gets up to 22 degrees difference," Leahy said. "And what's happening now is our cities are heating up as we're not getting that body cool down that we used to get as a natural part of our rhythm."

Climate change has reared its head this summer in the form of record temperatures across much of the western U.S., and it's plaguing cities across the globe, claiming lives along the way.

"It just kind of feels like this year it really sunk in that climate change is here, and it's reaching that critical mode," Leahy said. "And so what we're looking at now of trees is this really fundamental infrastructure to our future."

Some organizations and efforts in Milwaukee understand the value of trees in curbing its climate-related issues, but the city has a ways to go. American Forests recently listed Milwaukee as one of the cities with the biggest tree equity disparity. This was revealed through the American Forestry Equity Score, a free tool that awards cities a score based on how income, employment, race, age and health in a community align with tree canopy and surface temperature.

Fewer trees were fundamentally tied to a community's wealth. And in Milwaukee, Leahy said it would take about 980,000 medium-sized deciduous trees to achieve tree equity. But planting so many trees is expensive and locally there's only so much money to go around. Still, there's momentum at the federal level to invest in green infrastructure.

"Everyone's like, 'We get it. Trees are this critical infrastructure to save lives. The cities are heating up,'" he said, referencing bills such as the Trillion Trees Act.

And Leahy said in general, investing in this sort of green infrastructure pays off — three times the initial investment.

"If we address this tree equity issue, we'd be getting about $5 billion in additional benefits every year," he said. That might be in the form of pollution being taken out of the air or stormwater control. That was measured by the U.S. Forest Service's i-Tree Landscape tool.

But some cities seem to be headed in the opposite direction. Generally, Leahy said cities are dealing with significant declines in urban tree canopy cover that's related to development and investments in other priorities.

"No one would ever say urban forestry has a really intense, powerful lobby behind it," he said.

But it goes back further than that. Tree populations in cities were largely affected by previous eras' politics, like redlining. Research into how racist politics affected cities' green infrastructure shows there's about a 65 percent difference in the canopy between the wealthiest neighborhoods and the lowest income neighborhoods.

Plier, with the Milwaukee Metropolitan Sewerage District, said equality and equity in Milwaukee has been an important part of the conversation and noted that the sewerage district has been looking at its 28 community service areas to determine which need help going green.

"Green infrastructure not only benefits stormwater, but it has all these extremely strong ties to other community benefits, such as health and aesthetics," she said.

Through a partnership with the city of Milwaukee, the district completed a green infrastructure plan to "green up" urban schoolyards and even rarely-used parking lots.

"If you can generate new green space where people can enjoy the outdoors, it can help cool off the local environment, and it can also help with storm water," she said.

Throwing Shade: How Cities Are Using Trees As 'Green Infrastructure' To Beat The Heat 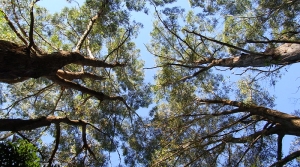 Cities across the country are looking for ways to adapt to a changing climate as heat waves and flooding become more common. One answer might be more trees. We look at how trees and other  green infrastructure can  combat extreme heat and weather.