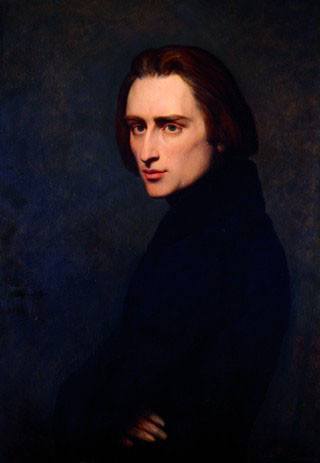 The lover or the priest? An incident from early in the life of Franz Liszt suggests that even as a teenager he had the impulses of both.

By the age of sixteen Liszt had long since made a name for himself as one of Europe’s great pianists. In Paris he gave lessons to members of aristocratic families, among them Caroline de Saint-Cricq the seventeen-year-old daughter of a count who was finance minister for King Charles X.

The lessons were chaperoned by Caroline’s mother, who, in her way, was apparently as charmed by Liszt as Caroline was. The Countess seems to have fanned the couple’s hopes to become engaged.

After an emotional reunion at the Countesses’ funeral, Liszt went to see Caroline just about every day. They had long conversations about poetry, religion, and music. On one occasion they talked past midnight, forcing Liszt to ask the hall porter to unlock the door to the street.

Unaware that discretion came with a price, Liszt neglected to tip the servant, and the next time he came to the house, the Count was waiting for him.

He reminded Liszt that a mere pianist was no prospect for the daughter of a Count, ended the lessons, and showed Liszt the door.

The distraught Caroline fell sick and spoke of becoming a nun, but finally agreed to marry the son of a wealthy government minister.

Liszt suffered a nervous breakdown and begged to enter a Paris seminary in order to become a priest, but his mother and a spiritual advisor talked him out of it.

Liszt and Caroline never got over each other. During a chance encounter sixteen years later, they reminisced about their broken love affair.

And in his will Liszt left her a signet ring, but since she died in 1872, fourteen years before he did, Caroline never knew about the token of his lifelong affection for her.