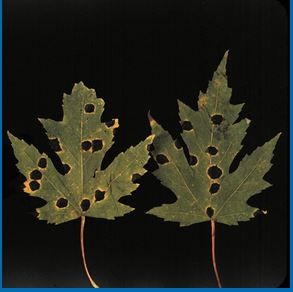 Look Out, Plants! Garden Diseases Can Cause Big Trouble

After such a long cold winter, it can be hard to remember what went on in the garden last year, but it’s important to keep tabs on issues, especially diseases, to prevent them from recurring.

Brian Hudelson, the director of the Plant Disease Diagnostics Clinic in the University of Wisconsin-Madison Department of Plant Pathology, said it’s not always easy to tell if plant damage is caused by insects or disease.

“It can be very difficult. Oftentimes what we have to do is actually look at a sample in the lab, because there are a lot of things that can be mimicked by both disease-causing organisms and insects.

“Sometimes it takes a microscope. Sometimes the things you’re looking for are not visible to the naked eye: it can be a real challenge,” he said.

For the 2013 growing season, Hudelson said that tar spot was the biggest disease problem in Wisconsin yards and gardens. The symptoms include “large, tarry-looking spots,” he said, and Norway Maples seemed to be especially affected. Tar spot is a fungal disease. It has been very prevalent for the last five or six years, he added.

Hudelson said that he has always seen tar spot impact trees in counties that border Lake Michigan, “but it’s now started to move across the state, into the western and more northwestern parts of the state.”

He said that this particular fungus is a European variant of the pathogen that has been introduced to the U.S. That explains why the Norway maples are suffering more than other species.

In contrast, Hudelson said, the native strain of the pathogen attacks Silver maples instead. He expects that both strains will continue to be a problem in the upcoming growing season because they overwinter in leaf debris.

“If you’re not diligent in cleaning up the leaves in your yard … that fungus will survive and produce spores, and you’ll get a lot of infections from that,” he said.

Some plants seem to thrive no matter the conditions, location, or amount of care we give them. Others, however, seem to be disease magnets.

Hudelson is also keeping an eye on downy mildew, especially on impatiens, as well as late blight and powdery mildew in vegetable gardens.

“Those are pretty much diseases that we’re guaranteed to see,” he said.

While it’s impossible to completely eliminate the risk of disease, choosing resistant plants can go a long way in avoiding problems.

Laura Jull, a professor and extension specialist for woody ornamentals in the Department of Horticulture at UW-Madison, said that some of the species most prone to disease are Colorado blue spruce, Austrian pine, and Scots pine.

The Plant Disease Diagnostic Lab has hand-outs available for download on a variety of plant pathogens.