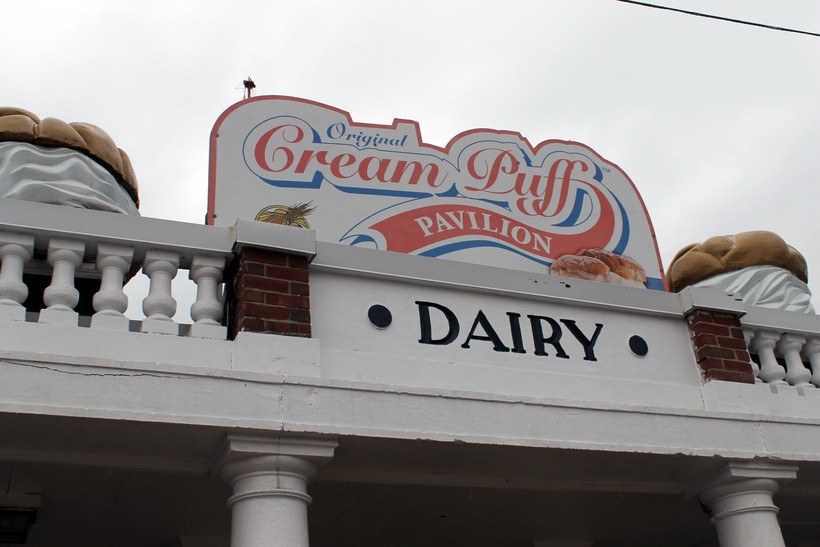 The cream puff pavilion is a staple of the Wisconsin State Fair. Connie Ma (CC-BY-SA)

A Look Back At The History Of The Wisconsin State Fair

Fair's Marketing Director Says Event Has Only Been Cancelled 5 Times Since 1851
By Chris Malina
Share:

When the Wisconsin State Fair opens it gates Thursday, it’ll kick off 11 days of food, music, animals and much more.

It’s a tradition that goes back 164 years and boasts quite the history.

First held in the fall of 1851, the original Wisconsin State Fair was a two-day event in Janesville, sponsored by the state agricultural society, which was seeking more paying members.

"Ultimately, it was a grand success," said Kathleen O’Leary, marketing director for the Wisconsin State Fair. "They reported between 8,000-12,000 fairgoers on the grounds during that window of time."

That made the fair the largest reported gathering in Wisconsin at that point in history.

That first fair consisted mostly agricultural displays, according to O’Leary, with a spotlight on produce.

"That was very popular and the farmers really enjoyed earning their bragging rights about that," she said.

According to news reports at the time, it was also noted as being a particularly clean event. The description in the Milwaukee Sentinel newspaper, said O’Leary, read: "The fair is an orderly affair without a single intoxicated man in the crowd."

The success of the event only grew in the following years. While the state fair didn’t stay in Janesville for long, it did take some time to find a permanent home.

"It was transient for 41 years," O’Leary said. "It was held in Watertown, Fond du Lac, Madison and multiple locations in Milwaukee."

It wasn’t until 1892 that the fair came to its current home in West Allis, where it’s been ever since. O’Leary said the location was key — West Allis was nicely located between the state’s two major cities, had sufficient acreage for displays, and boasted sufficient boarding for the exhibitors.

Since 1851, the Wisconsin State Fair has only been cancelled five times. War was the reason for four of those cancellations — three straight from 1861 to 1863 due to the Civil War, and again in 1945 during World War II.

The other cancellation came in 1893, when World’s Colombian Exposition was held in Chicago.

"The fair officials at that time anticipated a loss of attendance just because of the competition," O’Leary said.

While food is now a huge part of the state fair experience, it wasn’t always that way. According to O'Leary, it wasn’t until 1924 that fairgoers were introduced to what’s now known as the signature food of the Wisconsin State Fair: the cream puff.  The cream puff pavilion was built that year, and has been operating ever since.

"It is still the bakery, and it is still where all the cream puffs are made," she said.

1948 was arguably the biggest year ever for the State Fair, as it celebrated the 100th birthday of Wisconsin.

"The entire State Fair park was renovated and given a facelift to provide a modern appearance," O’Leary said. "That year, that fair was 23 days long as it was truly a celebration of the state centennial."

And celebrate they did: According to O’Leary, the attendance for that year’s fair was close to 1.8 million people. The admission price was a whopping 50 cents.

The 1948 centennial fair will be the subject of this year’s historical exhibit at the Wisconsin State Fair, which will cost a little bit more to get into.

More information on this year’s fair can be found on the Wisconsin State Fair website.