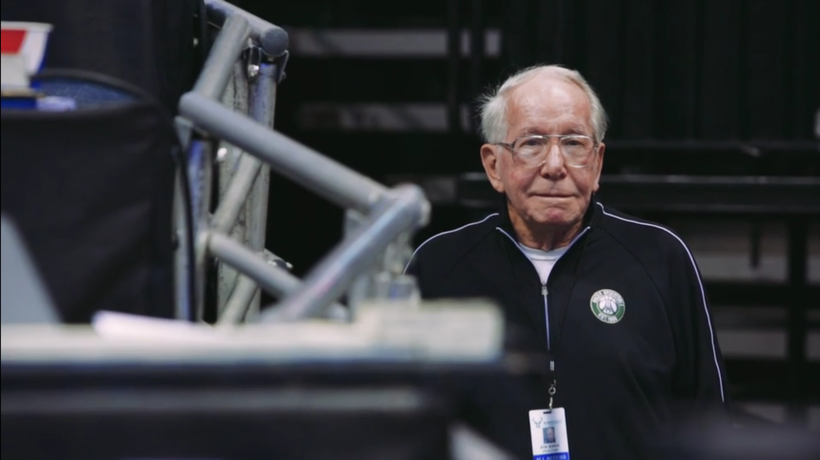 Bob Wanek Has Kept Score For The Team For 50 Years
By Gretchen Brown
Share:

Milwaukee has its share of sports legends. But one of the city’s most enduring is someone you may not have heard of.

Take it from the famed sportscaster Eddie Doucette: "There’s nothing around Milwaukee that is as old a relic as Bob Wanek."

The Milwaukee Bucks celebrates its 50th anniversary this year. Bob Wanek, now 85 years old, has been with the team since day one as its official scorekeeper.

He’s finally getting some of the limelight in a new documentary, "Bob The Buck," set to play at the Wisconsin Film Festival on Friday, April 6.

Bob The Buck Festival Teaser from Brendan Jones on Vimeo.

Growing up around Milwaukee, filmmaker Brendan Jones says Wanek was someone he’d always see at Bucks games, but never really knew who he was.

He finally got a chance to introduce himself one day recently, as Jones worked part-time running audio at a Bucks game.

Wanek was initially hired by Doucette, who was the head of public relations for the team at the time.

"Bob was kind of like the authority on scorekeeping," Jones said. "And Eddie (Doucette) was like, 'I don’t want to worry about this, you seem to know everything, we’ll bring you on.'"

"He’s been the constant over those 50 years," Jones said. "The next closest person would be John Steinmiller who still works with the Bucks, and then John McGlocklin who was the first draft pick."

The job has changed a bit over the years, aided by computer software. But Wanek still sits courtside and documents by hand the players, fouls, points, turnovers and rebounds. He can answer questions from the referees. He also has an entire scoring team working with him.

"If there is a mistake that Bob sees, they most likely will side with Bob, the non-computer, because they trust his judgment," Jones said. "And NBA officials over the years have recognized Bob as being the best in the game."

Wanek is a stats whiz. He loves numbers, and he loves basketball because there’s always a finite answer, Jones said. He’s seen a lot of it, too — 97 of the game’s top 100 all-time scorers, over the years.

He even earned the nickname "The Commissioner" from former Bucks General Manager Wayne Embry for how much he knew about the game.

Wanek told Jones he hopes to keep at it until he’s 90 years old, which would be 55 seasons in the game.

For the documentary, he showed Jones his memorabilia in his home, all boxes of merchandise and giveaways, yearbooks and statistics.

Jones said making the film has showed him a different side of the sport.

"When you start meeting the people behind the scenes in sports, you realize it impacts lives differently," Jones said. "There’s many interesting positions that a lot of people don’t know exist until you see it first-hand."