Matt Flynn has been part of Democratic politics in Wisconsin for 40 years. He's been a party insider. An adviser. A contender.

But in his four runs for public office, Flynn has never won.

It's left Flynn — a Navy veteran, a former state Democratic Party chair, and a longtime attorney for a major Milwaukee firm — introducing himself to many voters for the first time.

One way he's done it is by becoming the unlikely face of the marijuana legalization movement in the 2018 governor's race.

Flynn came out early in favor of legalizing marijuana, and months later he took it a step further, promising to pardon anyone in Wisconsin's prisons serving time for nonviolent marijuana offenses.

The positions made him a welcome guest recently at Herb RX, a new store in Sun Prairie that sells products from the hemp-derived substance cannabidiol, or CBD.

"That would be the best," Coates responded. "Awesome."

"My goal would be a very large reduction in the prison population and the jail population," Flynn said.

Flynn said pushing legalization wouldn't have been possible when he got his start in politics, and with other Democrats now calling for legalization, the issue alone may not put him over the top in a 10-candidate primary.

Flynn's most outspoken critics want people to get to know him by looking at his work defending the Milwaukee Archdiocese against victims of priest sexual abuse, saying it disqualifies him for governor.

Flynn disputes that. He's been through all of this before. And he says this could be his year.

"Winston Churchill said that politics is just like war except you can be killed 17 times," Matt Flynn said. "I've been killed probably 10 or 11 times, but I have some more lives left in me."

Flynn's win-loss record in politics suggests a perennial candidate, someone who frequently runs for office even though they never really had a chance to win.

But longtime Democrat consultant Bill Christofferson said that was never his impression of Flynn.

"He for some reason has never put the 51 percent together," Christofferson said. "And I can't explain that really."

Flynn's first campaign was in 1978, when he became the first in a long line of Democrats to lose a congressional race to Republican U.S. Rep. Jim Sensenbrenner.

"It was a clearly Republican district," Flynn said. "But I was 30 years old. In those days, you know you're immortal."

In 1986, after a four-year stint as state Democratic Party chair that saw him pull the party out of debt, Flynn ran his second campaign for public office, this time for U.S. Senate against Democrat Ed Garvey.

One Wisconsin State Journal article at the time described Flynn as a fighter who was a contender in the race, in part, because of "his personality, his persistence and his ego."

Christofferson was Garvey's campaign manager in that race, and said Flynn was well-known among Democrats, "looked like he could have been a Kennedy," and was good on the stump.

"He was a formidable candidate," Christofferson said. "He was tough for us to beat. As late as a week before the primary, we were still a little bit behind him, I think."

Flynn came up just short, losing the Democratic primary by fewer than 25,000 votes.

In 1988, it looked like the stars might align for Flynn. By that time, he was living in Milwaukee, in a new congressional district, this one with a Democratic lean. And then-Democratic U.S. Rep. Jim Moody was leaving the seat to run for U.S. Senate.

Flynn ran, and it looked like the district could be his. He had name recognition and connections, including the support of former Democratic U.S. Sen. Bill Proxmire, who cut a TV ad on Flynn's behalf.

"Matt Flynn is among the most honorable, bright and decent young men I've ever encountered in public life," Proxmire told viewers.

When multi-millionaire Herb Kohl decided to run for U.S. Senate, it scared other candidates out of the race because they were convinced Kohl would win.

That included Moody. He ended his bid for U.S. Senate race and came back to run for his old congressional seat. Flynn was furious.

"I won't repeat what I said, but we had very, very hard words," Flynn said.

Flynn lost handily. He says stuff like that happens in politics.

It would be 16 years before Flynn ran another campaign, losing a 2004 Democratic primary to now-Democratic U.S. Rep Gwen Moore.

Flynn was criticized in that campaign, as he has been this year, for defending the Milwaukee Archdiocese during the Catholic Church's priest sexual abuse scandal.

"As a leader of a progressive group, I know that in order to be successful in 2018, we need to put the strongest candidate forward. And Matt Flynn is not that person," said Sarah Pearson, who heads the group Women's March Wisconsin.

Flynn represented the Archdiocese of Milwaukee from 1989 until 2004 while working for Quarles & Brady.

It's not the first time Flynn's connection to the firm has been used against him. In his 1986 U.S. Senate run, a Kenosha union barred Flynn from their union hall because of a dispute with Quarles & Brady in another case.

But the priest sexual abuse scandal gripped the nation, and in Milwaukee, Flynn was on the front lines defending the Catholic Church.

Flynn said he was doing his job.

"I think any discerning person looks at this and says, 'Matt Flynn is one of the top lawyers in Wisconsin and he handled these cases very well professionally,'" Flynn said.

But Flynn's critics say his extensive involvement in these cases is his legacy and he should end his campaign for governor.

"Of course victims are devastated that he's running for governor," said Peter Isley, the former Midwest director of the Survivors Network of those Abused by Priests, or SNAP.

Isley has helped publicize details of Flynn's work for the Archdiocese, including a $25,000 severance payment he oversaw to a the Rev. James Arimond, a priest convicted of sexual assault of a teenager.

Joining Isley in criticizing Flynn has been Sarah Pearson, who heads the group Women's March Wisconsin.

"As a leader of a progressive group, I know that in order to be successful in 2018, we need to put the strongest candidate forward," Pearson said. "And Matt Flynn is not that person."

Flynn, who is Catholic, stresses that he defended the Milwaukee Archdiocese in these cases, not individual priests. He said he's proud of his work. 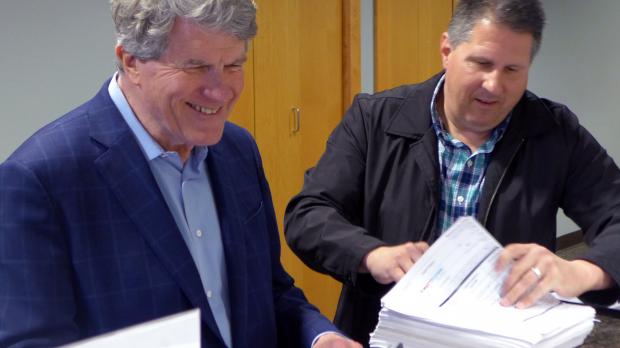 Matt Flynn, left, and his campaign manager, Bryan Kennedy, at the Wisconsin Elections Commission on May 9, 2018. Flynn was the first candidate for governor to turn in nomination signatures. Shawn Johnson/WPR

Talk of Flynn's record at the Archdiocese has left a mark on his campaign.

When he was introduced at this year's Democratic State Convention — an event he chaired almost 40 years ago — there were some boos in the crowd.

For longtime Flynn supporter Dottie LeClair of Appleton, it was tough to hear.

"One issue does not make an entire campaign," LeClair said. "I mean he's former DPW state chair. He knows politics. He knows how things are really run. And that's what we need in Madison."

If the issue is taking its toll on Flynn, he hides it well. He shows no signs of a candidate who's been through the ringer, and he shrugs off his four defeats in past campaigns.

"Winston Churchill said that politics is just like war except you can be killed 17 times," Flynn said. "I've been killed probably 10 or 11 times, but I have some more lives left in me."