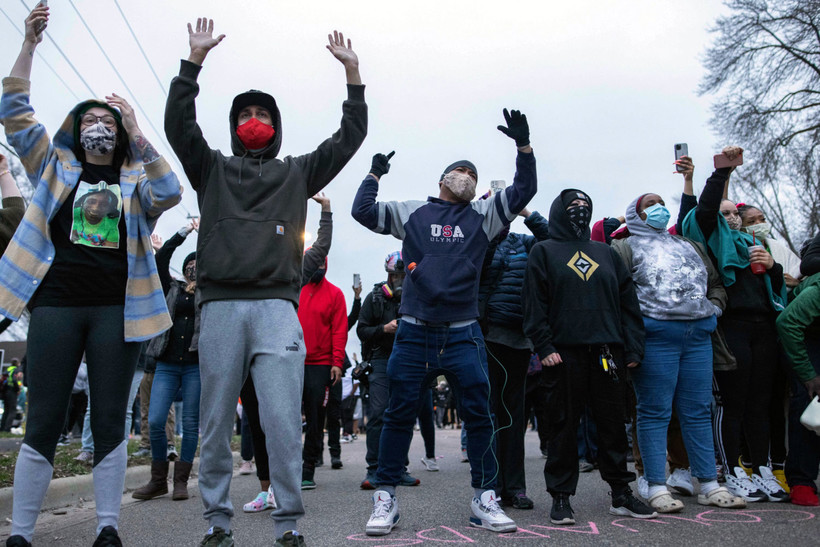 People raise their hands in front of the authorities near the site where a family said a man was shot and killed by local law enforcement, Sunday, April 11, 2021, in Brooklyn Center, Minn. Elected officials across the country have included police violence as a determinant of health among communities of color. Christian Monterrosa/AP Photo

Since 2019, more than 170 local governments including counties, cities, and community boards have declared racism to be a public health crisis, according to a county report from Oregon. These declarations have led to responses such as increased funding, research, and coordination to improve health outcomes for communities of color.

Brown County declared racism to be a public health crisis in February, and an ad-hoc committee is currently working to implement that decision.

While public health professionals have long talked about the social determinants that affect health, this past year's racial reckoning and COVID crisis have made structural racism a central point in a national conversation about inequitable health outcomes. The COVID-19 pandemic made it increasingly apparent that infectious diseases disproportionately impact communities of color. Harvard University found that African Americans make up 13 percent of the U.S. population, but account for a quarter of the nation’s COVID-related deaths.

"Justice is an elusive thing. There is no one definition of justice," Jenkins said in an interview.

She is clear that this declaration will not lead to a sea change, but is part of a series of steps the city council is taking to redress the harms of institutional racism.

The declaration states, "Being anti-racist means moving and speaking in ways that repair (not simply abandon) more than 500 years of racist policies and practices."  Beyond setting goals, Jenkins said, "We really want to be able to understand how systemic racism is impacting our institutions, our communities, through anti-racist trainings and workshops." 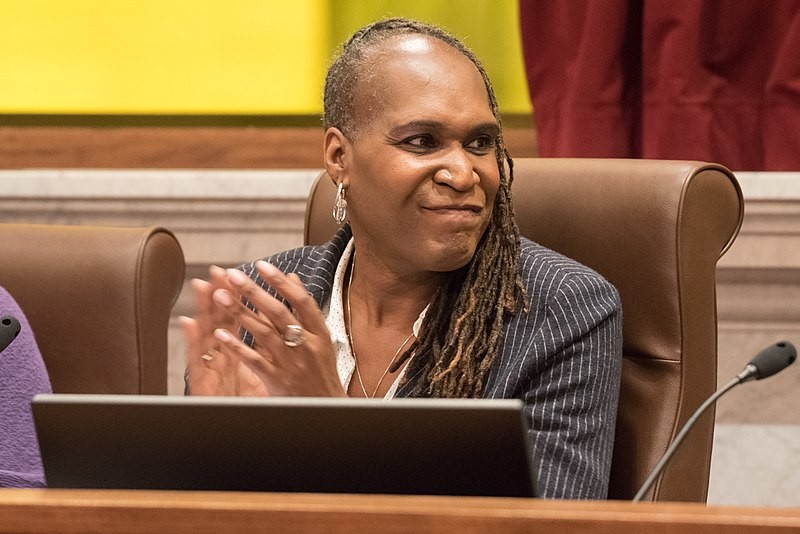 Minneapolis City Council Member and Vice President Andrea Jenkins at the initial organizing meeting of the new term of the City Council on Jan. 8, 2018. Tony Webster.

The Minneapolis declaration takes a broad view of health, focusing on housing stability, police violence, and increasing economic opportunity for communities of color. Jenkins noted that some police responsibilities have already been transferred to the Health Department's Office of Violence Prevention. She also wants to replicate community-based models of public safety like CAHOOTS, a mental health crisis response alternative to policing in Oregon.

"We are very deeply in the midst of transforming public safety," Jenkins said.

Milwaukee was one of the first cities to declare racism a public health crisis in 2019, followed by Madison. In Wisconsin, life expectancy differs by 14 years when comparing white and Black residents of the state, and Black mothers lose infants at three times the rates of white mothers, according to the Wisconsin Department of Health Services.

Dr. Michelle Allen directs a University of Minnesota program in Health Disparities research and has worked as a physician in federally qualified health care centers.

"My patients have been talking forever about how racism affects their health," she said. Issues that Dr. Allen said her patients have mentioned include barriers to earning a liveable wage, historical trauma, and violent encounters with the police. The issue now is "moving towards closing the gap between policy and action," she said.

Local governments aren't alone in tackling the health crisis of racism; some institutions like universities and private businesses are making equity a priority as well.

The campaign only gained traction once race and identity, including sexual identity, became part of the discussion, Knights said, noting higher smoking rates in Black and LGBTQ populations. "(Racism) is the ultimate multiplier, and if we don’t talk about that we’re not talking about health equity," he said.

Building wealth, health, and safety in communities would save states significant sums of money. In a 2018 report, BCBS calculated that the annual cost of health inequities is $2.6 billion in the state of Minnesota. The amount that city and local governments will allocate to address this crisis remains to be seen. In Boston, Mayor Marty Walsh transferred $3 million from the police budget — less than one percent of police funds — to public health spending, according to NPR. The mayor has also pledged to transfer more funds from policing into housing, mental health, and supporting businesses owned by women and people of color.

By focusing on health outcomes, local officials hope to take more tangible action on the undeniable and persistent impacts of racism. While progress on eliminating racism can be elusive, the intention is to bring institutions and resources together to address this issue for what it is－a perpetual crisis.

"Are we making progress on eliminating racism from our society? Which is almost laughable when I think about it," Jenkins said. "But it's not, and we gotta work on it."