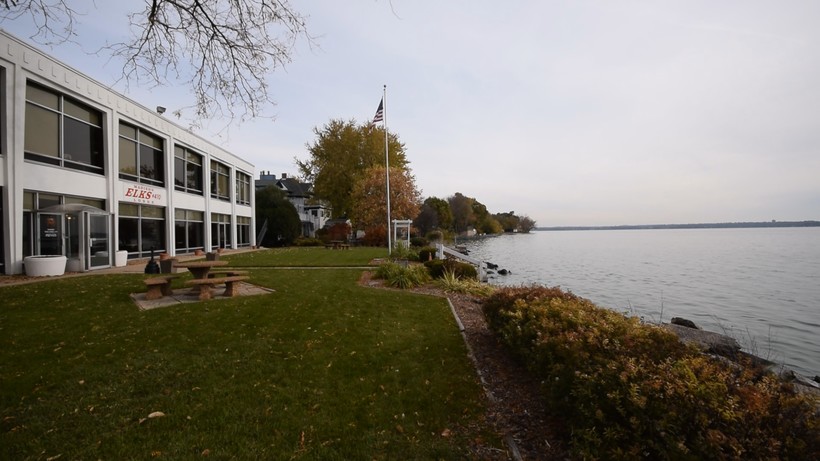 AMC finished airing the first season of its original series, "Lodge 49," earlier this fall. The comedy/drama centers on the fictional "Fraternal Order of the Lynx" and shines a light on the inner workings, mysteries, social dynamics and membership struggles of private clubs like The Elks, The Freemasons and more.

To see what the show may have gotten right, embellished, or fabricated — and to see how clubs like these are doing here in Wisconsin’s state capitol — WPR’s Chris Malina visited the local Elks Lodge, The East Side Club, and The Masonic Center for tours and to chat with members.

The members at the fictional "Lodge 49" get really excited when a young stranger walks in and wants to join the club.

The "Golden Era" — in terms of membership — for real-life clubs like these was generally post-World War II. Most organizations have since seen their membership decrease and grow older as time passes. Paul Reilly, president of Madison’s The East Side Club, recalls membership being around 1,000-strong in the 1950s when they moved from their original location on Atwood Avenue in Madison to their current lakefront property a short distance to the south on Lake Monona.

Lynn Aspinwall at Madison's Elks Lodge is a third generation "Exalted Ruler." "It’s a fancy word for president, but that’s part of the ritual of The Elks," she said. She’s hoping to bolster membership by recruiting from her own family.

"I have a 22-year-old daughter, how am I going to get her to join in 10 or 20 years? Each of our members feel the same way. It’s an opportunity to show them what we’re doing in our community and then say, 'This is a great opportunity for you to be a part of it as well,'" Aspinwall said.

With membership down, some clubs have tried to adapt by opening their lodges for public and private events, like fish fries and weddings. The East Side Club works hard to feature their big backyard and lake views with a summer music series, tiki bar and sports leagues.

"Thirty-two teams come in here on Monday night to play bocce ball, and they drink beer. Now we have one on Tuesday night because we couldn't handle them all on Monday. And Wednesday night, we have a Kubb league. Being on the lake, the taxes are very high, so all this activity we do is called survival mode," says Reilly.

Still Male Only? No Ma'am

"Lodge 49" gets a few zingers in about the tendency for organizations like these to be male-only. Aspinwall says the Elk Lodge "was always a male-based organization. I believe it was in the early '90s that they changed the charter to allow women to become members."

Craig Froelich is a member of The Scottish Rite of Freemasonry in Madison. The Freemasons have remained a male-only organizations, and he says, "I really wish there were more organizations like ours for women. But in the end, it is a fraternity. We are a social organization for men and it’s just the way it’s been throughout our history."

Curious lore and strange rituals create a shroud of mystery for the AMC’s fictional Lynx Lodge 49. The secrets and traditions of the clubs in Madison are a little more pedestrian.

The East Side Club has its own song, complete with three competing origin stories.

Paul Reilly said there’s a line about never drinking "the water from the fountain ‘round the corner of the street." He explains that the line might have originated with members witnessing horses drinking from a community fountain nearly a century ago when their club was near the intersection of Winnebago Street and Atwood Avenue. Another is that students from Madison East High School would soak their feet in the fountain on hot days. The third, which Reilly jokingly refers to as "best reason of all, is one day, a member saw a woman rinsing out a diaper in there."

The club has changed locations and the original fountain is long-gone, but the song remains.

Froelich insists that The Freemasons don’t have big secrets.

"The secrets of Masonry were published in a book in the 1820s; they’re all over the internet," Froelich said. He said the real secrets of Masonry are small; contained in the ability to confide in each other and the trust that builds among the members.

Froelich suggests inter-generational camaraderie is a core value of Masonry.

"For a guy who’s 23 years old to sit down and talk to a guy who’s 85 years old and hear his stories; that’s a very special thing," he said. "That’s one of the most valuable things we have to offer."

Aspinwall agrees camaraderie is central to The Elks experience, and cites the tradition of their 11 o'clock toast, which is a toast to their absent and deceased members.

She jokes, "A lot of us don’t make it to 11 o’clock much these days, so once in a while we’ll pass it off at 9 o’clock; just taking a moment to reflect on what it means to be an Elk."

It turns out that for all of the surrealism and absurdity of "Lodge 49," it gets a lot of stuff right when it comes to the state of affairs at some of Madison’s private clubs.

These places are a social outlet, they’re about having fun, networking and giving back to the community. The Elks work with kids and veteran’s charities, The East Side Club provides college scholarships and The Freemasons fund the children’s dyslexia center.