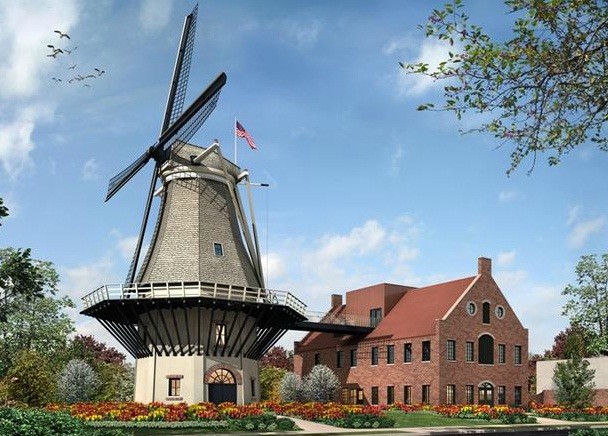 Little Chute gets a big windmill

After fifteen years of planning, a Fox Valley town has built its authentic Dutch Windmill.  Little Chute hopes it will bring in the tourists.

Envision quaint shops selling wooden shoes, a tulip festival, and a soon to be built visitors’ center which will accompany the 1850's-style Dutch windmill in Little Chute.

This week the Boldt Construction company--along with a firm from the Netherlands--lifted the final pieces of the windmill into place.

Three year old Lucas Verstegen was there to watch, "They gonna hook it up!"

Lucas' Grandmother is Mary Verstegen who says her husband's ancestor was one of the first settlers to come from Holland to Little Chute, "Hopefully it all works out."

The man behind the windmill is Lucas Verbij who brought a team from Holland to lift the pieces into place with a giant crane. His company builds and restores similar windmills in the Netherlands and did a project in Pella, Iowa ten years ago.

He says windmills are a big draw on both continents, "So it really adds, and wait until it turns. It's now still a static building. In two weeks it'll turn with the canvass sails then it'll be even more attractive and more beautiful to see."

Little Chute's windmill will be functional. The community is interviewing potential volunteers to operate a gristmill with the idea of getting a local bakery to use the flour for artisinal breads.