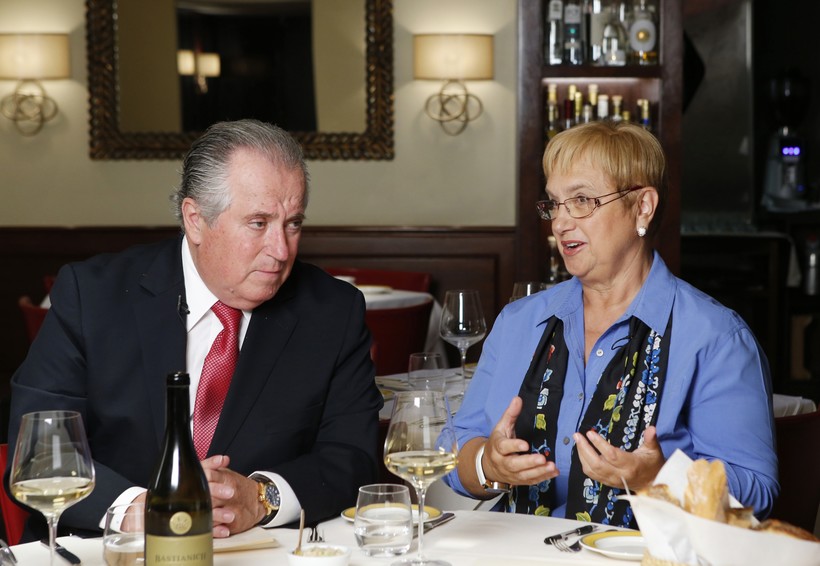 'Lidia's Kitchen' Host 'Grateful' To US For Successes

At a high point in her career as a restaurateur and chef, Lidia Bastianich found herself in the kitchen of a papal nuncio preparing a meal for the pope sleeping upstairs.

"It was like family, and it was just extraordinary," Bastianich said of the experience with her team cooking a meal for Pope Benedict XVI, one of two popes she has cooked for in her career. The other would be Pope Francis.

For Bastianich, a best-selling author and celebrity chef, that familial experience harkened back to her early years she spent at her grandmother's house in the company of beloved chickens, ducks and goats. Her nature-filled childhood eluded the realities of communist rule in the newly formed Yugoslavia, where residents of the once Italian territory could no longer speak Italian or go to church.

That experience is revealed in Bastianich 's recently published 352-page memoir, "My American Dream: A Life of Love, Family and Food," that also details some of the insights that she gained from her grandmother, Nonna Rosa.

"Mother had the mindset to put us with grandma so we wouldn't feel the oppression and difficulties (of communism)," Bastianich said, noting those difficulties included her father being jailed for being a capitalist, and the family having to change their name.

"I remember just the beautiful relationship that I had with grandma and with all of those animals and the food that we produced and that I helped her, too," she said.

The family eventually escaped Yugoslavia, first without their father under the guise of visiting a sick aunt. He rejoined them later after he walked over the border, dodging bullets and dogs.

The family wasn't looking back.

Bastianich said her family members ended up in Trieste, Italy, where they spent a few years in a former Nazi concentration camp that was eventually re-purposed as a camp for political refugees.

"It was a dreary place," Bastianich recalls, saying it took her four trips in her adulthood before she could muster the strength to revisit the site where her family stayed for two years. "It felt so oppressive, it felt so dark."

Immigration opened to the United States and Bastianich and her family moved to New York City, a prospect that earned excitement from a 12-year-old Bastianich and provided relief for her parents who knew there was no future in the camp.

For a family with no money, no knowledge of the language and no connections, Bastianich lauded the services provided by the government and other associations that provided assistance.

Through it all, Bastianich kept cooking and eventually took a job in a bakery, which just so happened to be operated by the parents of actor Christopher Walken. Bastianich said he has remained a friend.

The energy earned from being in a comfortable and safe environment bred a can-do attitude in Bastianich that eventually encouraged her and her husband — also an immigrant — to open a nine-table restaurant. That was in 1971.

After 10 years, they opened Felidia on 58th Street in Manhattan, where Bastianich could achieve her dream of cooking Italian food reflective of Italy's 20 regions. That's when she started getting attention, she said.

"'What is this woman, woman chef, Italian and what kind of Italian food is she cooking?'" Bastianich guessed about questions reporters and others were asking.

Her faith has been a major component in her career, she said, prefacing the story of how participation in a United Nations fundraising event led to her meeting a Vatican representative who asked if she'd be interested in cooking for the pope.

"I jumped and I said, 'Of course, I would,' but you know I never thought it would happen. But it did," she said.