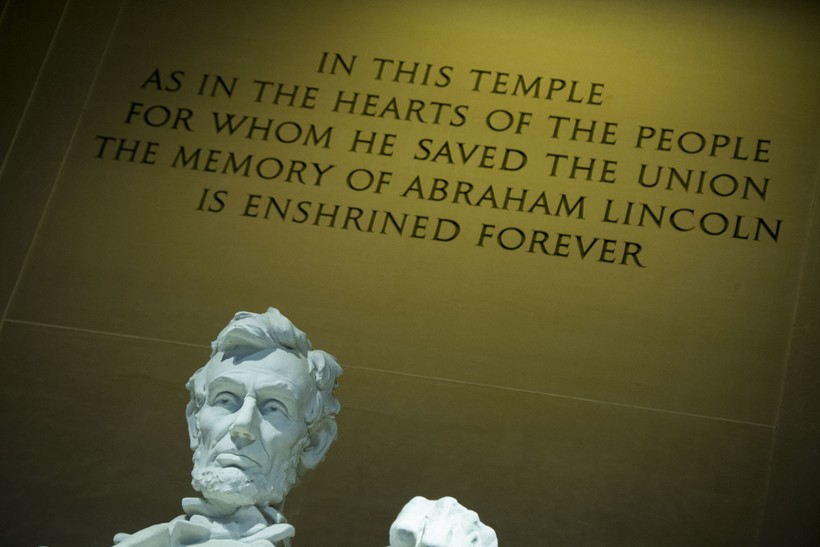 The statue of Abraham Lincoln, and quote above it, inside the Lincoln Memorial in Washington, Sunday, June 4, 2017. AP Photo/Cliff Owen

Lessons In Crisis Management From Leaders Throughout History

Ever sat down to type an angry email, saving it to drafts before you could hit send?

President Abraham Lincoln did in his own way.

Angry over Union General George Meade’s decision not to pick another fight with the Confederate Army following the Battle of Gettysburg, Lincoln penned a response in a letter.

"He really believes that if Meade had attacked the Confederate Army then … the war would’ve been over, the Union would’ve won, and Lincoln would’ve saved the nation," said Nancy Koehn, professor of business administration at Harvard University.

Lincoln folded the letter neatly, placed it in an envelope. But he didn’t sign it. He didn’t send it.

That made all the difference, Koehn said.

"The lesson there, and it’s a really important lesson in our white-hot reactive moment, is just step away," she said. "Consider in the heat of the moment, when you are all churned up, doing nothing. Sometimes doing nothing is the most powerful thing you can do."

If Lincoln had sent the letter, Meade may have resigned. Lincoln didn’t have a replacement waiting in the wings.

Famous leaders throughout history each faced some sort of personal conflict, some sort of trial. Koehn says we can learn from how they handled them.

She wrote about that idea in a new book: "Forged in Crisis: The Power of Courageous Leadership in Turbulent Times."

At the book’s helm is a quote from David Foster Wallace in the April 13, 2000 issue of Rolling Stone:

"A real leader is somebody who can help us overcome the limitations of our own individual laziness and selfishness and weakness and fear and get us to do better, harder things than we can get ourselves to do on our own."

Koehn agrees with the theory. She uses the quote as a thread to connect each leader she profiles, but said it fits every true leader, big or small: whether that’s a coach, a teacher, a community organizer, a firefighter, a physician or a senator.

Take Dietrich Bonhoeffer, for instance. Bonhoeffer was a minister in an alternative, anti-Nazi church in the 1930s.

"In 1939 he is such a suspect figure by the Gestapo and the SS that his friends get him to the United States for a year of safe keeping," Koehn said.

However, Bonhoeffer was in the United States for less than two weeks when he realized he should be back in Germany, in the thick of the fight. He hopped on a ship back, and began life as a double agent, both as a member of military intelligence for Nazi Germany and as a member of the resistance working to overthrow the Nazi government.

"In that decision he says, 'I was so frightened,'" Koehn said. "And that’s the interesting thing about each of these people. They ultimately are courageous, but don’t find their courage muscles before they literally … step into the fear."

We often think of leaders as fearless, but Koehn said they’re not. Leaders are human, she says, and they push past the fear to do what they need to.

Forged in Crisis: The Power of Courageous Leadership in Turbulent Times

Forged in Crisis: The Power of Courageous Leadership in Turbulent Times