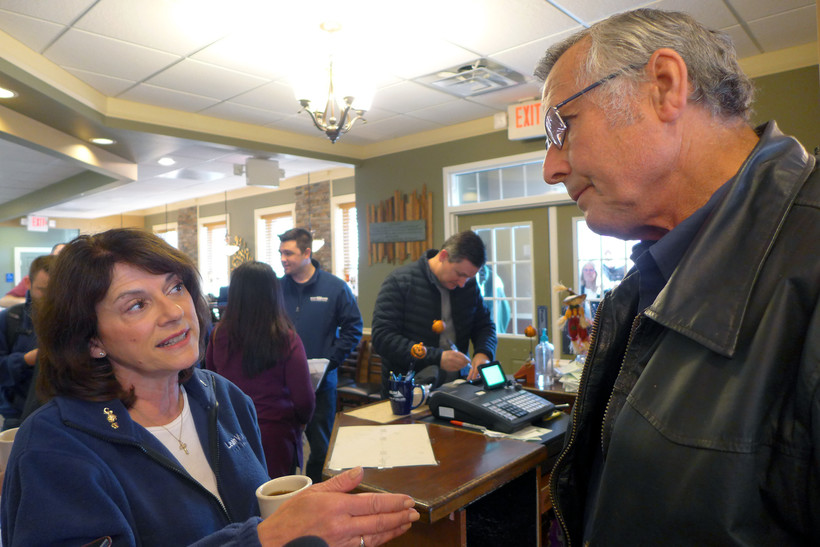 With the election right around the corner, candidates are going far and wide to get their message across to voters before Tuesday.

Republican U.S. Senate candidate Leah Vukmir had five campaign stops scheduled for Friday. She started the morning at Two Sisters Café in Watertown, following that stop up with appearances in Dodgeville, Platteville, Richland Center and La Crosse, where she was to meet Gov. Scott Walker and Lt. Gov. Rebecca Kleefisch.

In Watertown, Vukmir brought up many themes favored by President Donald Trump and mentioned his name repeatedly as she talked about a border wall between the U.S. and Mexico, tax cuts and regulatory reform.

"We need someone in Washington who is not going to cancel out Sen. Ron Johnson’s vote. Right now, Tammy Baldwin cancels out his vote every single time. We’re sick and tired of it. We’re sending her back to the private sector, which she doesn’t even know exists. Are you with me?" she asked a cheering crowd of supporters, many of whom were sporting Trump's signature red "Make America Great Again" hats.

Vukmir said she couldn’t be more different than her opponent, especially when it comes to health care and taxes.

She referred to Democratic incumbent U.S. Sen. Tammy Baldwin as "Taxin’ Tammy," and called her out for voting against the president’s tax cuts. Those tax cuts, Vukmir said, had put $2,500 into the pockets of the average Wisconsin family. She did not mention the size of tax breaks for corporations in the bill signed into law last year.

Vukmir also characterized Baldwin’s support for Medicare for All as "extreme" and said if elected, she’d help get rid of the Affordable Care Act.

"Obamacare is failing. Premiums are skyrocketing," she said.

While opposed to the ACA, Vukmir said she is not against protecting those with pre-existing conditions.

"Let’s put it right out there. I’ve said it before and I’ll say it again: I will fall under a truck before I let people go without protections for pre-existing conditions," Vukmir said.

Vukmir later told reporters she supports high-risk insurance pools for those with high-cost medical conditions and supports Walker’s promise to codify protections now in the ACA into state law. She said health care should be under the state’s control.

"I want to get rid of Obamacare and I want to make sure we cover all people with pre-existing conditions. Whatever vehicle, however we get it done, I am there," she said.

Pivoting to the military, Vukmir proudly relayed how her 27-year-old son was promoted to captain in the U.S Army on Friday, which also happened to be his birthday.

"I am thrilled and honored to be a military mom. I will never turn my back on you," Vukmir said, using the opportunity to criticize Baldwin. "But Tammy Baldwin turned her back on all of you at Tomah VA."

After Vukmir's speech, she was approached by retired dairy farmer Jim Zahn of Juneau. He lamented how many farmers were going out of business and questioned whether Vukmir, if elected, would keep the dairy margin program, which helps farmers when prices are low.

"It’s the poorest dairy program in my 41 years of milking cows. We need to improve it," Zahn urged.

Vumir responded that she has met with farmers all around the state and would look into it.

"I’m retired. I don’t have to worry about it," explained Zahn, "but there’s my children and my grandchildren. I’m worried about my kids losing the farm I paid for."