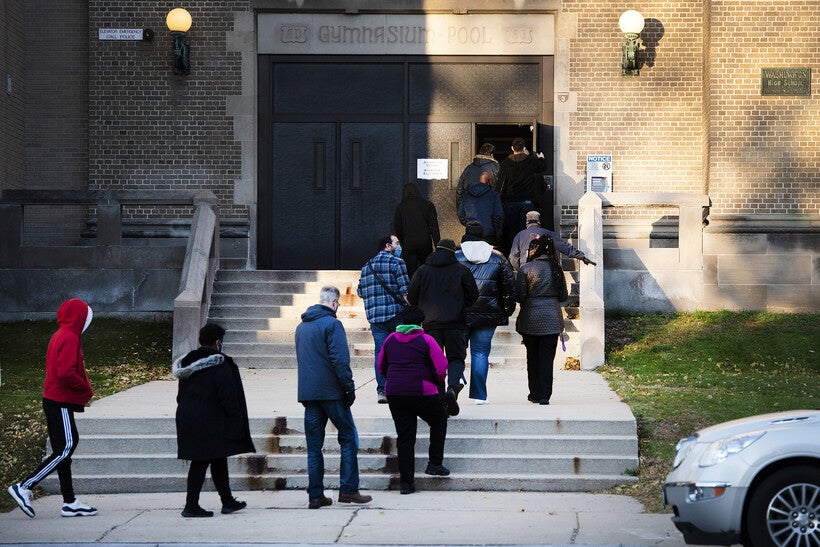 An Election Law Expert Says Move Would Be Unprecedented
By Shawn Johnson
Share:

Three Wisconsin residents have filed a lawsuit asking a federal court to throw out all the votes cast in Dane, Milwaukee and Menominee counties in last week's election, a move one election law expert says would be without precedent.

The lawsuit, which was filed Thursday in U.S. District Court in Green Bay, relies on allegations of voter fraud from multiple anonymous sources. It's similar to other lawsuits filed by allies of Republican President Donald Trump in other swing states that supported Democratic President-elect Joe Biden over Trump.

Central to their lawsuit is an argument that the influx of absentee ballots in this year's election led to errors, which undermined the results.

"Election workers, overwhelmed by the sudden flood of mailed ballots, have less ability to carefully review them to screen out fraudulent ones, creating a substantial risk that fraudulent votes will be counted and vote-dilution disenfranchisement will occur," the lawsuit reads.

In addition to alleging that clerks mismanaged the absentee ballot process, the lawsuit makes unspecified allegations of voter fraud, which election officials say is exceedingly rare. A recent review by Wisconsin Public Radio found clerks flagged just 238 possible cases of voter fraud out of more than 12 million votes cast in the past four years.

Those named in the lawsuit include county clerks and election officials, as well as Gov. Tony Evers and members of the Wisconsin Elections Commission.

Based on unofficial results reported by county clerks, Biden won Wisconsin by fewer than 21,000 votes.

"It would be unprecedented," said Edward Foley, a professor of law and director of the election law program at Ohio State University. "The request here is extraordinary and it's out of character with our entire presidential electoral system."

Foley said that's because lawsuits like these are filed in state court, not in a federal district court. He said getting a federal court involved would run the risk that Wisconsin would miss deadlines for appointing presidential electors.

Beyond that, he said the legal theory of the case did not hold up.

"This would sort of nullify the whole process," Foley said. "It would ... destroy the character of the process by saying we're going to count votes in certain parts of the state and not other parts of the state."

County clerks throughout Wisconsin are currently completing their canvass of election results.

As of Friday, 60 of Wisconsin's 72 counties had completed their canvasses. Compared to unofficial returns, they had resulted in a net gain of four votes for Biden.

Dane and Milwaukee are among the remaining counties that have yet to report their canvasses to the Wisconsin Elections Commission. Under state law, they have until Tuesday to complete the process.

Assuming the remaining counties finish the process Tuesday, the Trump campaign would have until 5 p.m. Wednesday to request a recount in Wisconsin. It would also have to pay for the estimated cost of the recount upfront.

Third party candidates requested a recount of Wisconsin's previous presidential race, a process that took 10 days and cost approximately $2 million. That process resulted in a net gain of about 131 votes for Trump, who won the state by fewer than 23,000 votes in 2016.