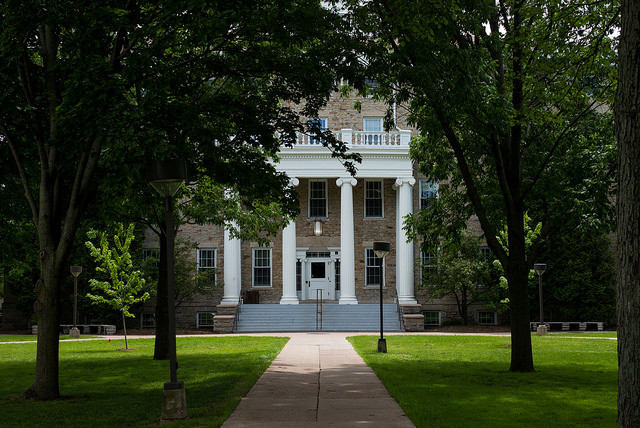 Lawrence University To Pay Tuition For Students Who Can't

The University In Appleton Seeks Endowment For Full Scholarships
By Shamane Mills
Share:

Lawrence University in Appleton is joining the ranks of Ivy League schools across the nation in at least one respect: by paying tuition for students who can't.

Lawrence University is closing in on a lofty goal: it’s nearly reached the level of endowment needed to cover tuition and fees for those who can’t afford the private, liberal arts school where tuition for the 2018-19 academic year will cost $57,816.

In 2014, Lawrence University started a fundraising campaign called "Full Speed to Full Need" with the intent of raising $85 million. The fund now has more than $74 million, and university officials hope to reach their final goal by next year.

"One of the motivations for us to start this campaign is we realized that students who have gaps in their financial aid were less likely to graduate. And that’s important to make sure we support every student and family so they can thrive academically and socially," said Lawrence University President Mark Burstein.

About 20 percent of those enrolled at Lawrence receive Pell Grants, a federal program for students with financial needs.

"The vast majority of our students get financial aid of one sort or another. So Lawrence has been a place for families of limited means that receive a transformative education. That’s been our history over 170 years," said Burstein.

The endowment Lawrence is seeking to grow has been called a "bold" move in higher education circles. That’s because it’s usually larger, more well-known schools that have such endowments.

"Lawrence is a well-respected private college and it's reasonably selective, but it’s not an Ivy League or a multi-billion dollar endowment institution. Its got a modest endowment," Kelchen continued. "Doing this really stretches their finances. It’s a big commitment for Lawrence to do."

Burstein said the university has received 1,000 donations ranging from $5 to $25 million. Many donations are from Lawrence alumni.

One of those who gave to the fund is Tom Paulson from Kaukauna, who graduated from Lawrence as a non-traditional student at the age of 32 in 1993 thanks in part to the financial support he received from the university.

According to a U.S. News & World Report survey, only 66 out of 1,388 ranked colleges and universities reported meeting students' full financial need.

"It’s absolutely bold," said Kelchen. "But the one thing to watch out for though, is will they have to admit fewer low-income students in order to fund them all? And is that a tradeoff people are comfortable with? Would we rather have more low-income students get a Lawrence education but take on quite a bit of debt or will (the university) be comfortable with fewer students going there but the ones who go there be very well supported?"

"Lawrence has always been, and will continue to be a socioeconomically diverse place," said Ken Anselment, dean of admissions and financial aid at Lawrence University.

The university is part of an organization known as the American Talent Initiative. Colleges in the group are trying to graduate an additional 50,000 more low- and moderate-income students by the year 2025.