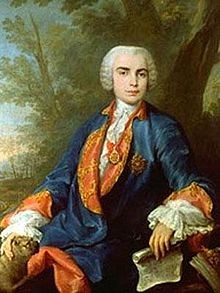 Lavish in the Extreme

At the court of Spain’s King Ferdinand V and Queen Maria Barbara, the famed Italian castrato Farinelli was such a royal favorite that he could have influenced Spain’s politics, but he preferred to make his mark on the country’s musical life–and that he did with a vengeance.

As the director of court operas, Farinelli brought in Europe’s best singers and commissioned new music and new librettos. But when it came to the scenery and special effects, he went all out.

For an opera by Giovanni Battista Mele two hundred chandeliers illuminated a 41-piece orchestra tricked out in new scarlet and silver uniforms. The first act of the opera had a pastoral landscape, songbirds in cages, and eight fountains, two of which shot water so high that it put out the candles on a chandelier hanging sixty feet overhead.

The last scene of the opera took place in the temple of the Sun, in which tall columns of red and white crystal sported transparent silver and gold figures that stood out against a rosy glow. Various colors of crystal globes hung upstage, as did two hundred rotating stars. Prominent above all were the transparent signs of the zodiac.

At center stage stood the octagonal house of the Sun supported by columns of green and white crystal. Inside it waited the chariot of the Sun in gold and crystal, to be driven by Apollo with the Sciences personified at his side. The horses moved in globes of cloud. The Sun, five feet in diameter, was made of crystal, and from it radiated two sets of spiral crystal rays spinning in opposite directions, extending the orb’s diameter to twenty-one feet. As backstage machinery raised the house and the Sun chariot, the park of Buen Retiro appeared, illuminated by fireworks and many-colored lights.

The set and special effects impressed the King and Queen so much that Farinelli received one of the highest orders of knighthood in Spain.