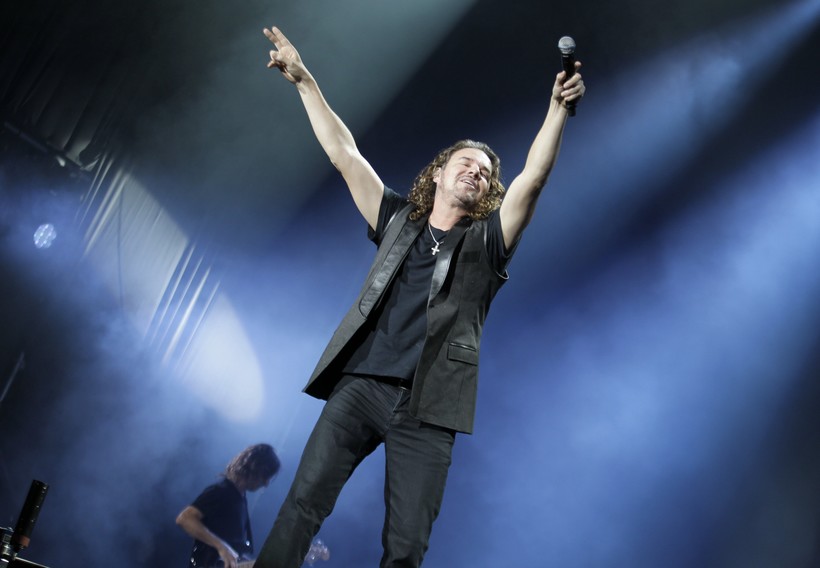 In this Dec. 15, 2011, file photo, singer Fher Olivera of the Mexican group Mana performs during a concert in Asuncion, Paraguay. Mana band was awarded with a Latin Grammy on Sunday, Feb. 12, 2012.

The sounds of accordions, electric guitars, and reggaeton beats will radiate out of Mauston, Wisconsin this weekend at the first annual Los Dells Festival.

The acts include some of the biggest musicians in the Latin music world and the lineup is diverse, from banda music to pop to bachata. Rock megastars Maná are headlining Saturday night while the "King of Reggaeton" Daddy Yankee takes the main stage Sunday night. Some of the musicians appearing rarely tour in the United States, let alone in Wisconsin.

Los Dells is being put on by Damon Zumwalt, owner of the massive Woodside Sports Complex, where the fest is taking place. Splitting his time between Los Angeles and Juneau County, Wisconsin Zumwalt recalls the first time he encountered the property.

"When I got on horseback and I rode through this property, it was kind of like you're in 'Bonanza' on television," Zumwalt said. "I rode out through the forest and I saw this great, big meadow. The first thing I thought was, 'How many soccer fields can I put there? And what a great place this could be for a music festival.' It's just a beautiful environment. We're hidden back here and it's like a diamond in the rough."

Zumwalt made his fortune as CEO of Contemporary Services Corporation, which provides security at hundreds of concerts and sporting events each year, including Coachella and the Olympics. He founded the company as an 18 year-old in 1967, creating what he calls "peer-group security."

"It was a time when they needed something different because it was a transition from the oldies-but-goodies days to the new rock 'n' roll era," Zumwalt said. "They certainly needed a different approach to security for the rock era. I ended up hiring a lot of college students and college athletes who were used to following direction."

And it’s through that work over the years that Zumwalt realized something was missing in the music world. The majority of festivals were serving mostly white crowds and musicians.

"I felt especially that the Latino community is underserved in this region," Zumwalt said. "People don't realize how many people are here working in all the small towns, much less Chicago, Milwaukee, Madison, Minneapolis and places like that. I don't think (the Hispanic music community) has had the opportunity to go to the festivals like the caucasian rock 'n' roll people.”

So that’s why he invested money in Los Dells.

There are other Latin festivals in Wisconsin, such as Mexican Fiesta in Milwaukee, as well as musical gatherings and concerts. But sometimes, those focus on a specific genre and feature regional music acts. Zumwalt said Los Dells is different since it features a wide range of musical genres and global musicians.

Although the first year of a music festival can be financially risky, Zumwalt wants to make Los Dells an annual event that attracts people from across Wisconsin, plus places like Chicago and the Twin Cities. And not only could it be a gathering place for Latin music devotees, but he hopes to convert people who aren’t familiar with the music into fans.

"This will give exposure to the typical la banda music," Zumwalt said. "But also, there’ll be some crossover with Daddy Yankee playing. You'll have crossover people coming to the show because they've been listening on the radio. So I think it'll open things up and give more opportunity to the artists."

Some of the artists this weekend include:

Maná is one of the biggest Mexican rock bands of all time. "They’re like the Rolling Stones or U2 of the Spanish-speaking world," Zumwalt said.

In their 30-plus year career, they’ve sold more than 40 million records and won piles of Grammys and other awards.

Daddy Yankee is a massive Puerto Rican pop star. He's known as the "King of Reggaeton," a Panamanian and Puerto Rican style of dance music known for its bouncing beats. Daddy Yankee explains it as "fusion of hip hop, reggae, dancehall and salsa."

He was recently crowned the No. 1 streaming artist on Spotify. That was certainly helped by his work on the 2017 Song of the Summer, "Despacito," with artist Luis Fonsi. It’s the most viewed YouTube video of all time with 3.5 billion views. He broke into the global music scene in 2004 with the massive hit, "Gasolina."

The indie pop musician, composer, and Tecate, Mexico native Carla Morrison has won three Latin Grammys and was nominated for a 2017 Grammy award for her album, "Amor Supremo."

Bronx favorite Prince Royce is also known as the "Prince of Bachata," a type of guitar-based dance music with roots in the Dominican Republic.

Los Tucanes de Tijuana have sold more than 14 million records since 1987 with their style of traditional Mexican banda and norteña music, often trademarked with the accordion and bajo sexto, a type of bass guitar. The Sinaloa, Mexico born members sing about everyday life, including romance and dancing, plus the drug cartels with their narcocorridos.

The Cumbia singer and accordion player is often referred to as the "rebelde de acordeón." Cumbia is a style of music widespread throughout Latin America, and according to NPR’s alt.latino, the "musical backbone of the continent."

The alt-rock band Enjambre formed in California, but moved to Mexico to make it big.