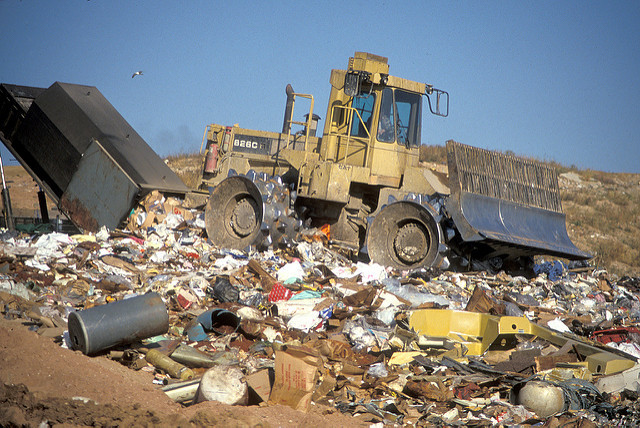 Portions of two Dane County landfill sites will be permanently closed later this summer and planted with pollinator-friendly plants and grasses to support dwindling bee and butterfly populations.

That’s just one example of the evolving means to deal with landfills in a sustainable way. And the sites have changed in a big way in recent decades.

"Today, they're very modern engineered facilities, containment is very good, and we actually recover the energy in these landfills very productively," said James Tinjum, associate professor at the University of Wisconsin-Madison.

In 1990, there were 676 permitted landfills in Wisconsin, said Tinjum, who teaches in UW-Madison's Department of Engineering Professional Development. Today, that number has dropped to just 58 active landfills around the state.

Many landfills, particularly small-town, unpermitted landfills, closed due to the federal Resource Recovery and Conservation Act of 1976, when landfill design standards were first passed. Prior to the passing of the RCRA, nearly every town in Wisconsin had its own dump, he said.

They are also much larger than they used to be — the two Dane County landfills closing are nearly 100 acres — and cover regions rather than individual towns, Tinjum said. Landfills take in waste from many sources, including municipal solid waste, paper mill sludge and foundry sand.

Closed landfills — there are 1,778 in Wisconsin — can be turned into dog parks, golf courses, solar energy sites, and drone or model airplane training sites, he said.

Gas emissions, like methane, are one of the things that worry Tinjum, who monitors landfills along with the Wisconsin Department of Natural Resources.

The other is leachate, water that has entered a landfill and comes into contact with waste, then potentially both ground and surface water. It’s cause for concern because it contains volatile organic compounds, such as paint thinners.

Landfills are one of the large contributors to methane emissions in the United States, accounting for 14 percent of emissions in 2016, the third largest source of methane produced by humans.

Yet the methane produced by landfills can also be repurposed into energy.

"One of the older Dane County landfills ... that is still producing landfill gas is being recovered and used to heat a nursing home and also for some electrical production," Tinjum said. "So we're looking at landfills 30 to 50 years after they receive waste, that are still producing methane that we can recover and convert to renewable energy."

Currently, waste generation is maintaining about equal rates, even with the rise of recycling, he said.

"We’re trending about equal, we're not really growing, we're not decreasing," Tinjum said. "With general population increase and consumerism, our waste streams are about the same as they have been the last decade."

And maintaining a landfill — even one that’s been permanently closed — can be costly. There's a post-closure period of 40 years in Wisconsin, which means there needs to be financial assurance for 40 years of post-closure care, he said.

There is space for growth, but the permitting process is very intensive, he said.

"We're encroaching on neighborhoods," Tinjum said. "So it's a struggle to get new permitted sites in Wisconsin, or anywhere."

Tinjum’s dream landfill would collect the leachate and methane and convert it to energy as the landfill is operated.

"It biocomposes over time, and maybe 100 years from now we'd go in there and mine out the residual metals and waste, and productively use everything that's been in there," he said.

They’re not quite there yet, but he says they’re making progress.