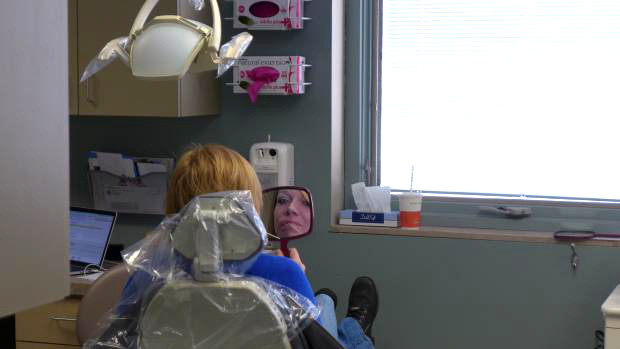 Danielle Steward of Mt. Horeb looks at herself in the mirror while getting a root canal at Madison Dental Initiative. The free clinic takes BadgerCare. Many private dentists do not because of low reimbursement.

Some people wind up in the emergency room with a tooth problem because they can't afford regular dental checkups.  But others end up with problems because going to the dentist isn't a priority.

Health professionals say, for too many people, going to see the dentist is not something they plan. Greg Nycz runs the Family Health Center of Marshfield, a federally funded community clinic.

"A lot of people if you ask them, when would they need to say a dentist, they would answer, 'When I have oral pain. You know, if I have tooth pain well then I need a dentist,'" Nycz said "Those folks aren't aware that that's perfectly avoidable. They don't ever have to have tooth pain."

Wisconsin Dental Association president Paul Levine said regular checkups may be recommended but they're not on everyone's radar, even if they can afford it.

"Part of the problem is education," Levine said. "People don't know what to do."

Levine said that if people have a regular dentist, they will be told when to get checkups and how to care for teeth. If they don't have a dentist and a painful tooth problem crops up, they may head to the emergency room.

"Patients will wait until the weekend, something will really bother them then. At that point they're not going to get a hold of somebody, so the easiest place to go is the emergency room," said Levine. "The emergency room can't solve the problem. They can relieve the symptoms for a short time."

But while convenience may be one major factor that steers people to the ER, there are other reasons as well, according to Debra DeNure, a public health nurse with Madison & Dane County.

"People will realize how much something hurts when they are not at work. And so many people can not miss work so they wait and wait and wait," DeNure said.

Money is also a factor in where people choose to get dental care. BadgerCare, Wisconsin's Medicaid program, does include dental but many state programs do not.

Thirty-one-year-old Danielle Stewart was able to get a root canal after moving to Dane County from Tennessee.

"Where I'm from you know they don't offer dental care at all. TennCare insurance does not cover any type of dental care (for adults)," Stewart said, describing Tennessee's Medicaid system.

Stewart said she was grateful to have dental services under Medicaid.

But some dentists who participate in the program, like Dr. Levine in Milwaukee,  complain reimbursement rates are low.

"The dentists that are on the state plan are reimbursed 30-35 cents on the dollar. That doesn't even cover half of our expenses," Levine said.

"You know if you have an open slot in your schedule, then you are not making any money, so 30 or 40 cents is better than none."

But Levine, of the Wisconsin Dental Association, said Wisconsin's dental portion of Medicaid is so underfunded that dentists in the program are donating more care than they're getting paid for by the state and federal governments combined.

"The average Wisconsin Association dentist  does about $10,000 to $12,000 donated dental work during the course of a year," he said.

Meanwhile, pediatricians and the Dental Association are teaming up to get young children into the dental chair earlier for that first visit.

Dr. Jeffrey Britton of Sheboygan is president of the Wisconsin chapter of the American Academy of Pediatrics.

"That involves trying to encourage parents to establish initial care with the dentist around age 1," Britton said. "That is sometimes a problem because not all dentists in the state accept kids at age 1. Some still want children to be 3 years old before they see them."

Britton said the earlier the better, because the bacteria-causing decay in baby teeth can later eat away at what are supposed to be permanent teeth.