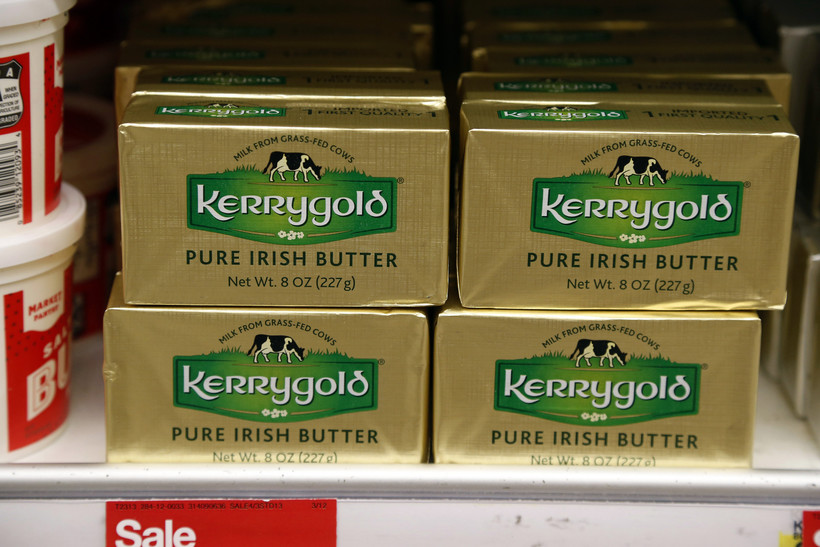 A supply of Kerrygold Irish butter sits amidst other butters on a store shelf Friday, March 17, 2017, in Edina, Minnesota.

Conservative legal group Wisconsin Institute for Law and Liberty marked St. Patrick's Day by suing the state for preventing the sale of an Irish butter.

In a lawsuit filed Friday, WILL is challenging a law from the 1950s banning the sale of Kerrygold Irish butter or any other butter that's quality has yet to be tested.

Butter is graded by the state Department of Agriculture, Trade and Consumer Protection — the agency the lawsuit is filed against. Grading is based on qualities such as taste and color, which WILL argues don't address health or safety concerns.

"We're obviously having fun with the lawsuit, but the reality is this is a serious issue in the sense that economic liberty is an aspect of civil liberty," said Jacob Curtis, WILL attorney. "Individuals should have the ability to make a living, to make economic decisions free of government interference, particularly if there is no rational basis for that interference."

The law has been in effect since 1954. But it's back in the spotlight after DATCP started cracking down on grocery stores selling Kerrygold, a popular butter made in Ireland.

"It's been something that has been taking place for a long time. It just never rose to the level of attention until Kerrygold was in question, and that has such a strong consumer following that it was much more, they were much more vocal about it," said Raechelle Belli, spokeswoman for DATCP.

While grading is meant to evaluate the quality of the butter, Belli said the process does account for safety of the product.

"In order to be a graded butter, it also has to be done in a licensed facility, that is done under sanitary conditions so that is part of it," Belli said.

Curtis said the law has been inconsistently enforced in Wisconsin, creating confusion among consumers and businesses.

"In every other state in the country, even states like Minnesota that have a similar requirement, Kerrygold is still sold. But not in Wisconsin," Curtis said.

Kerrygold is not a party in the lawsuit.

The state has 45 days to answer the complaint in Ozaukee County Court.