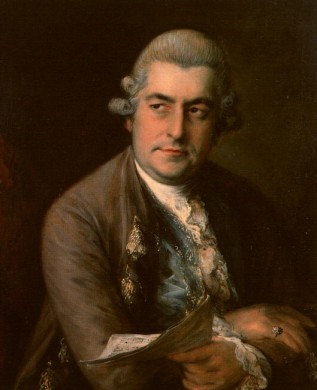 Thomas Gainsborough was one of England’s great painters. He thought that he could become a fine musician too. One friend had grave doubts.

In the 1770s Henry Angelo and his wife hosted gatherings that brought together various kinds of artists. In memoirs he wrote in 1830, he recalled that Gainsborough tried to buy Felice de Giardini’s violin and composer Karl Friedrich Abel’s viola, thinking that some of their skill would rub off on him. When he attempted to play Johann Christian Fischer’s bassoon,  Johann Christian Bach had to break the bad news to him.

Bach stopped by Gainsborough’s lodgings one day and found the painter blaring away puffy-cheeked and red-faced. Bach, who had lived in London for close to twenty years, still had a thick German accent, which Angelo captured in his account of what happened next.

“Pote it away, man, pote it away!” Bach bellowed above the racket of the bassoon. “Do you vant to burst yourself like the frog in the fable? De defil! It is only fit for the lungs of a country blacksmith!”

“No, no,” Gainsborough said. “It is the richest bass in the world.  Now, do listen again.”

“Listen!” Bach shouted, “I did listen at your door, and py all the powers above, as I hobe to be saved, it is just for all the vorld as the veritable praying of a jackass.”

“Damn it,” snapped Gainsborough, “you have no ear, man, no more than an adder.”

“Baw, baw!” Bach yelled, plugging his ears, “Vorse and vorse! No more of your canarding! ‘Tis as a duck, by Gar! Tis vorse as a goose!”

At Angelo’s house Gainsborough tried his hand at the harpsichord, playing tunes by Henry Purcell and William Byrd. Pushing him away from the keyboard, Bach cried, “Now dat is too pad! Dere is no law, by goles! Why the gompany is to listen to you murder all these ancient gomposers.”