'Joy Is A Deep-Seated Thing That He Had': Foster Youth Advocate Is Among Over 1,000 Dead From COVID-19 In Wisconsin

Wisconsin has crossed a sobering threshold. As of this week, more than 1,000 people in the state have been killed by the coronavirus. This includes Mary and Wilford Kepler of Wauwatosa, a couple married for more than 70 years who died within hours of one another; and longtime Washington High School basketball and track coach Ralph Davis, a pillar in his Milwaukee community. This week, WPR News and "Wisconsin Life" are bringing you the stories of those who have died.

Dosha "DJay" Joi really lived up to his name.

The 28 year-old activist posted a video of himself on Facebook in June of 2019. In it, Joi gives a speech about the pain he experienced as a child in and out of three foster care homes in Milwaukee — and how he ultimately rose above the darkness.

"The one thing you can never take away from me is the joy that I bring to so many people," Joi said in the 2019 video. "I have been told by a friend that my smile brings a very bright light into a very dark room. I have also been told that my smile makes a permanent impression inside someone and everyone’s heart that I need it to." 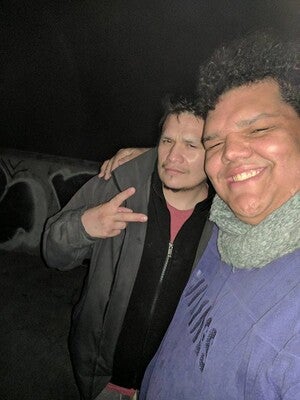 The two met at Springfield College in Milwaukee, where Joi received a Bachelor of Science degree in human services, and minors in addiction studies and domestic violence prevention. As counselors, Delagarza said he and Joi challenged each other to be the best versions of themselves.

"Our friendship was like the bomb, you know," Delagarza said. "He's like, 'I just want to help you grow in this area.' It was always that. And I would say, 'You know what? I'm going to tell you right now, I'm probably not going to like what you're going to say. If I get mad and I say something back, just know that it's because I'm not accepting what you're saying. But give me a few days and I'll come back and I'll tell you you're right.'"

Delagarza credits Joi for helping him get his current jobs as a counselor focused on drug and alcohol abuse with the Milwaukee LGBT Center, and as program director at Devoted Hearts, a group home for youth in Milwaukee.

Joi loved gospel music — his favorite artists were Aretha Franklin, Marvin Sapp, William McDowell, and Tasha Cobbs Leonard. He was deeply religious and on a mission to find his forever church in Milwaukee. Delagarza attended church with him countless times.

"It was my first experience witnessing the Holy Spirit in someone. I was trippin'! I thought he was having a seizure at first. He got up and started shakin’ and doing all kinds of stuff," Delagarza said, laughing. "And he would say, 'Well, you know, Tiodolo, when the Lord moves you, you just gotta move.'"

Recently, Joi was working on his health by going to the gym. He posted a video about eating healthier.

He had many friends and colleagues, plus a relationship with his birth mother and siblings.

Delagarza says Joi was unapologetically himself as a member of the LGBTQ community.

"And because he was able to just always be himself, I'm like, ‘I don't know how he does it, but I want to do that, too!’" Delagarza said. "I wanted to be able to find ways to just accept my sexuality." 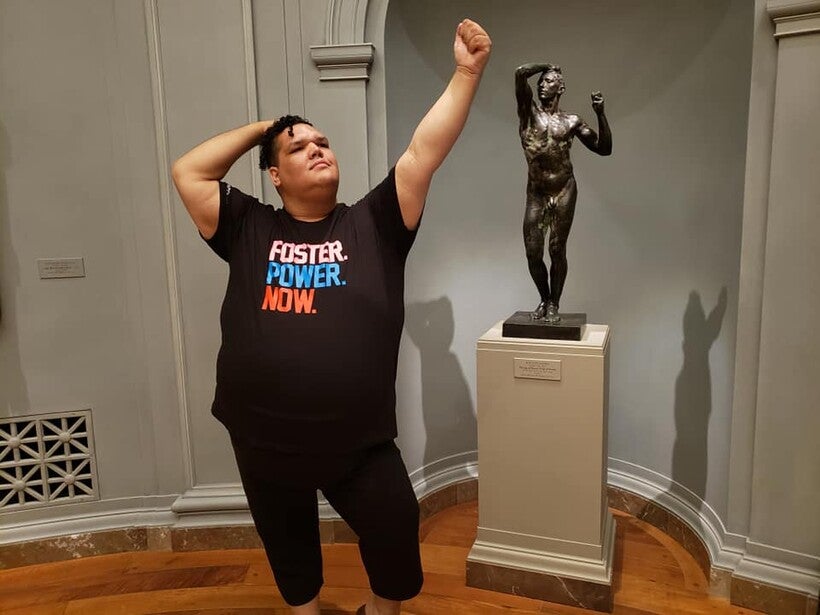 Dosha "DJay" Joi poses with a statue while on a trip to Washington D.C. in June 2019. Photo from Dosha Joi's Facebook

But advocacy and volunteer work were Joi’s life. He taught people their rights, accompanied minors to court as a court appointed special advocate through Kids Matter Inc., and counseled people struggling with substance abuse. Joi pushed to establish a group home for LGBTQ youth in Milwaukee and was a consultant at Devoted Hearts.

"He was bold. That brother was awesome," Delagarza said. "Always going the extra mile for people. And some people may have thought that he was doing too much. But in reality, he was just kind-hearted, you know? It was always for the benefit of the community. It was always for the support of clients."

Joi also worked with the Wisconsin Youth Advisory Council, which brings together former foster care youth and those living in out-of-home care to improve the system.

"He was always the first to raise his hand and to have a story about the reason why this was really important and why we had to make some changes," said Wendy Henderson, the Division of Safety and Permanence administrator with the Wisconsin Department of Children and Families. "He was an advocate in the best possible way."

She worked with Joi on and off for about 10 years and "watched him flourish." He would speak on panels for the state and talk with judges or social workers about what it was like to be in out-of-home care. He was a two-time Champion of Change Award recipient from the department. 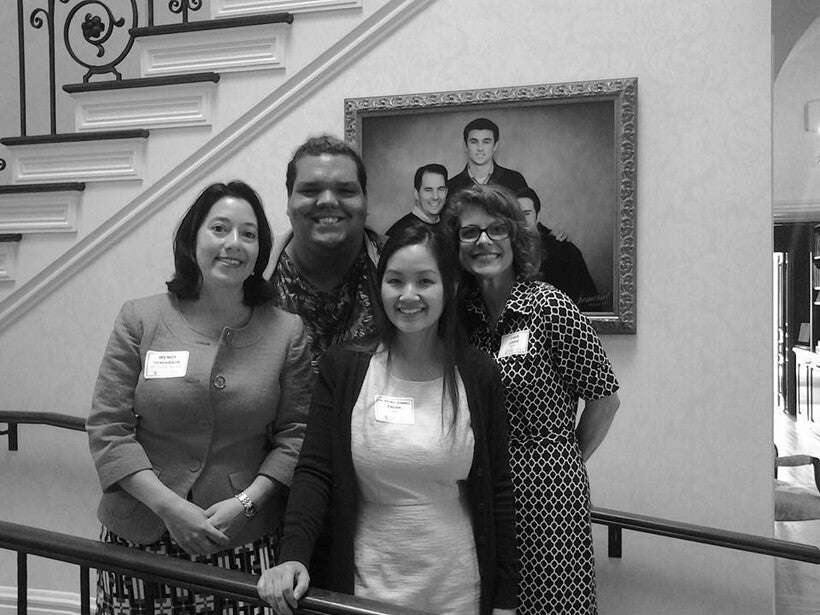 Wendy Henderson, left, Dosha Joi and others at the Wisconsin Executive Residence in June 2014 for a foster youth graduation event. Photo from Dosha Joi's Facebook

Henderson said Joi advocated for changes to the Reasonable and Prudent Parent Standard, a federal law surrounding rights for children living in out-of-home care to do "normal" things, like mow a lawn or go on vacation.

According to the Milwaukee Journal Sentinel, Joi also worked on a state Assembly foster care task force and testified on behalf of changes to work permit laws for 16 and 17 year-olds.

"There's nothing more powerful at a legislative hearing than hearing a young person talk about their own experience," Henderson said. "You take something that's the most traumatic experience of your life and then use that to try to make change in the system. That's a really hard tightrope to walk. And he did that well and he held other people's hand while they did it."

Joi died of complications from COVID-19 on May 14, 2020, after spending about two weeks in the hospital.

Henderson said she misses his famous, big hugs. Recently, she said he was moving from advocacy work to policymaking. 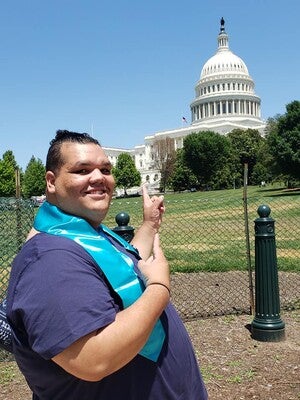 Dosha "DJay" Joi outside the U.S. Capitol in June 2019. The trip was organized by the National Foster Youth Institute. Photo from Dosha Joi's Facebook

"It's just a tremendous loss, honestly, because I think he could have been a great addition to wherever he decided to put his energy," Henderson said.

Joi took a trip to Washington D.C. in June 2019 organized by the National Youth Foster Institute. There, he developed a friendship with U.S. Rep. Gwen Moore of Milwaukee while shadowing her at the U.S. Capitol. After meeting, they spent Thanksgiving, Christmas, and New Year’s Eve together and often went to church — followed by brunch — together.

"He really was an inspiration to me," Moore said at Joi’s online memorial service. "DJay brought absolutely nothing but joy. He had no bitterness in his life, with everything he went through. He was positive and joyful. You know, happiness is temporary. Happy is dealing with what is happening to you. But joy is a deep-seated thing that he had, no matter what was happening to him. It has been a joy and pleasure to say he came my way." 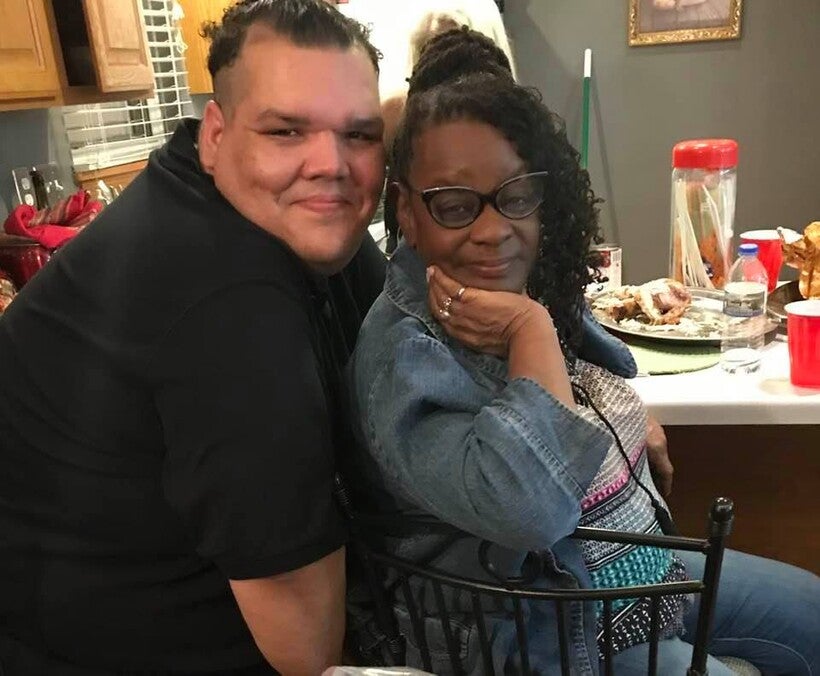 Dosha "DJay" Joi, left, with Congresswoman Gwen Moore celebrating Thanksgiving together at her home in 2019. Photo from Dosha Joi's Facebook

"That's his legacy. He wanted to change laws," Delagarza said. "I just hope those leaders that he held so high are going to follow through with what they say they're going to do — for the support of clients — because that's what he would want."

Delagarza said Joi also wanted to pursue his master’s degree and become a nurse. Joi’s dream was to take that knowledge and open a group home to help youth overcome trauma.

He deeply misses his best friend and Delagarza still texts Joi updates about his job.

"This was on July 6, and I said, 'Miss you, bro. I'm submitting my background check to the board to become credentialed nationally like we always talked about. Miss you, bro bro. Wish me luck," Delagarza said.

Delagarza now finds himself asking, "What would Dosha do?"

"I'm still living in what he taught me, you know? Just this time, it’s by myself now," he said.