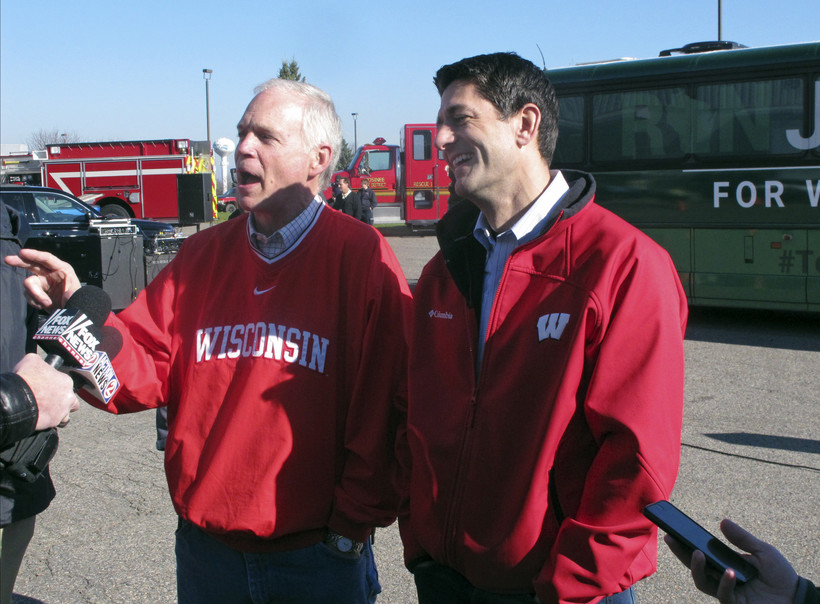 Republican Sen. Ron Johnson, left, and U.S. House Speaker Paul Ryan, both of Wisconsin, meet with reporters as they campaign together Nov. 4 in Mosinee, Wisconsin.

Wisconsin U.S. Senator Ron Johnson has high hopes for his second – and, as he promised on the campaign trail – final six-year term.

Johnson, who defeated Democrat Russ Feingold, said last week's elections showed "a real desire on the part of the American public, and ... folks in Wisconsin, for real change."

Moving forward, Johnson said he is optimistic Republicans in Congress will be able to find common ground with President-elect Donald Trump on areas like reforming Obamacare, investing in infrastructure and handling trade deals.

"The people recognize that all the promises made by the federal government haven't panned out real well," Johnson told WPR. "Things like the Patient Protection and Affordable Care Act did not live up to their names, so they're pretty frustrated by that. I think that's really the cause for the result of the election."

Johnson has long been an opponent of the federal health care overhaul, also known as Obamacare. But he said he was open to Trump's suggestion that the U.S. keep several provisions of the law, such as barring health insurance companies from denying health coverage to individuals because of preexisting conditions.

On preexisting conditions, Johnson said, individuals could maintain continuous coverage and take advantage of what are known as high-risk pools to keep health care access.

"I think (with) a few tweaks in what was the law prior to Obamacare, we could also very compassionately take care of individuals with preexisting conditions and very serious health care problems," Johnson said. "So I think (Trump's) comments are very compatible with the goals that I think every American, every Wisconsinite, shares."

"The devil's going to be in the details, but I think there are some ways of doing this without having, as Obamacare did, (to) totally reorder the health care market to really take care of those individuals who could not afford quality health care coverage."

Trump has also called for more federal infrastructure spending and some level of tax cuts, both of which could lead to higher deficits and more federal debt.

Johnson, who has criticized President Barack Obama's administration on the debt issue, said he will measure the potential impacts of infrastructure projects on deficit spending, which he calls "clearly unsustainable," against their long-term benefits.

"Our infrastructure is not in good shape," Johnson said. "We probably need to spend more on infrastructure, so I support that goal. It is a question of how do you actually pay for it, and, certainly, if we're going to allocate additional deficit spending to purchase infrastructure."

One of the signature issues of Trump's presidential race was a promise to renegotiate trade deals, including the North American Free Trade Agreement with Canada and Mexico, and to oppose the proposed Trans-Pacific Partnership.

Johnson declined to take a position on the TPP during his re-election bid, and said he now wants to work with the Trump Administration so that future trade deals have more benefits for Wisconsin companies and fewer ill effects for the state’s workforce.

"We have been taken advantage of in some of these areas," Johnson said, adding, "It's extremely important, for example, to Wisconsin agriculture and Wisconsin manufacturing that those overseas markets remain open to us. The last thing we want to do is engage in trade wars."

Critics say opening up past agreements could harm U.S. exports and the economy as a whole.

Johnson said he was inclined to steer clear of the controversy over President-elect Trump's chief strategist.

Steve Bannon is the former head of the website Breitbart News, which he describes as a "platform for the alt-right." Critics say the site publishes racist and anti-Semitic content; Johnson said he was not familiar with the charges.

"I don't know Steve Bannon that well, I really don't know about the writings," he said.

Johnson did say he was "very pleased" by Trump's decision to hire Reince Priebus as White House Chief of Staff, saying he knows his fellow Wisconsin Republican well and expects their relationship to be productive.

As the election concluded, Johnson said he was looking to find areas of common agreement. Despite divisions in the election results and in the aftermath of the election, he's optimistic that can happen.