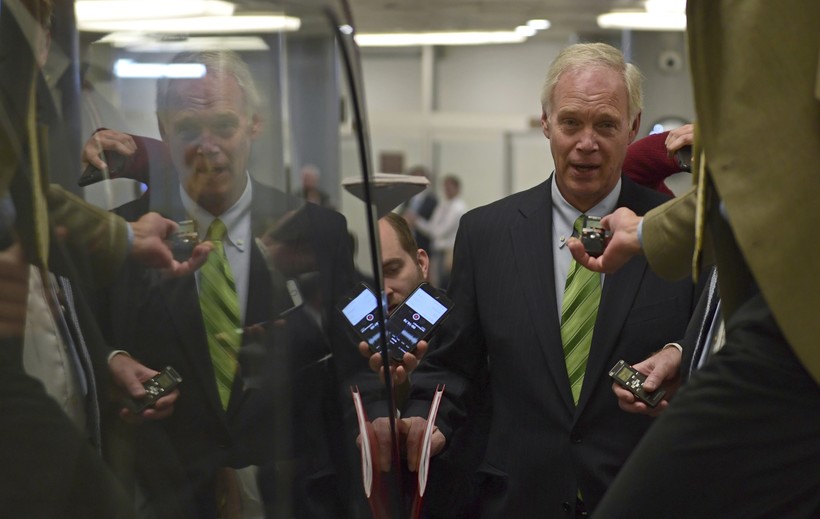 US Sen. Ron Johnson Says He Will Vote To Acquit Trump On Both Articles Of Impeachment
By Rob Mentzer
Share:

U.S. Sen. Ron Johnson said a federal agency's finding that President Donald Trump broke the law by withholding federal aid to Ukraine is irrelevant, and he'll vote to acquit the president on both articles of impeachment.

Johnson, a Republican from Oshkosh, has been one of Trump's stalwart supporters throughout the impeachment trial, despite having disagreed with the president’s position on Ukraine aid. On a conference call with reporters Tuesday afternoon, Johnson defended his decision to vote against allowing witnesses in the Senate trial, saying he saw no sense in extending a process he didn’t think should have begun in the first place.

"The articles (of impeachment) that (the House) produced do not allege any crime, not even what I would consider an impeachable offense," Johnson said. "That's why I will not vote to convict; I'll vote to acquit."

In a decision released Jan. 27, the federal Government Accountability Office found that Trump violated the law when he ordered congressionally mandated aid to Ukraine to be withheld. Johnson said that finding is not significant and is "not much of a factor" in his own judgment on impeachment.

"Those types of disputes between the executive branch and Congress happen all the time," he said. "None of those things rise to the level of impeachment. I don’t think it's particularly relevant."

Democratic impeachment trial managers made the case that the administration’s decision to withhold the aid was based on a desire to secure from Ukraine a public announcement of an investigation into Hunter Biden, the son of one of Trump's domestic political rivals, former vice president Joe Biden.

RELATED: Baldwin: It's 'Gut Check Time' For US Senate In Impeachment Trial

Johnson, who was involved as a member of Congress in Ukraine issues, argued that the administration should release the aid. He reiterated Tuesday that he disagreed with Trump's Ukraine policy at the time. (The administration did release the aid in September.) But he said he believed Trump was focused on the 2016 election, not in tampering with the 2020 campaign.

"I never viewed his desire to find what happened in Ukraine as having anything to do with the 2020 election," he said. "It was all a look back, trying to explain in some way, shape or form how he ended up with the special counsel."

Special counsel Robert Mueller investigated Russian interference in the 2016 campaign, an investigation that led to indictments and convictions of former Trump aides and Russian operatives.

In an October statement from Johnson on his interactions with Trump on Ukraine, Johnson said he "did not recall in any meeting or discussion with the president, or any member of the administration, that the term 'quid pro quo' was ever used." Johnson also said Trump "adamantly" denied having put conditions on foreign aid.

"I felt guilty even asking the question," Johnson said Tuesday.

But the claim that Trump was not demanding a quid pro quo from Ukraine is contradicted in a new book by former national security adviser John Bolton, according to reporting by the New York Times about the unpublished manuscript. Johnson last week told a reporter that "my guess is John Bolton tells the truth."

"I don't know exactly what was in the president's mind," Johnson said Tuesday. "But when he told me that there was no arrangement (with Ukraine), I believed him."

Democrats sought to have Bolton testify in the Senate trial, a move blocked by Johnson and other Republicans. Johnson said he expects that Bolton's account will be made public in the coming months, but also said that "I don't think whatever John says is going to affect my evaluation."

Wisconsin's Democratic U.S. Sen. Tammy Baldwin, voted in favor of hearing witnesses in the impeachment trial and is expected to vote to convict the president. At a Jan. 27 press conference, Baldwin said senators' oath to uphold the Constitution required them to respond to what she called Trump's abuses of power. And she singled out the interactions with Trump that Johnson had spoken publicly about.

"The people of Wisconsin certainly want to know if the president did not tell Sen. Johnson the truth," she said.

The Senate will vote on Wednesday to convict or acquit Trump. Republicans reportedly have secured enough votes to acquit the president.