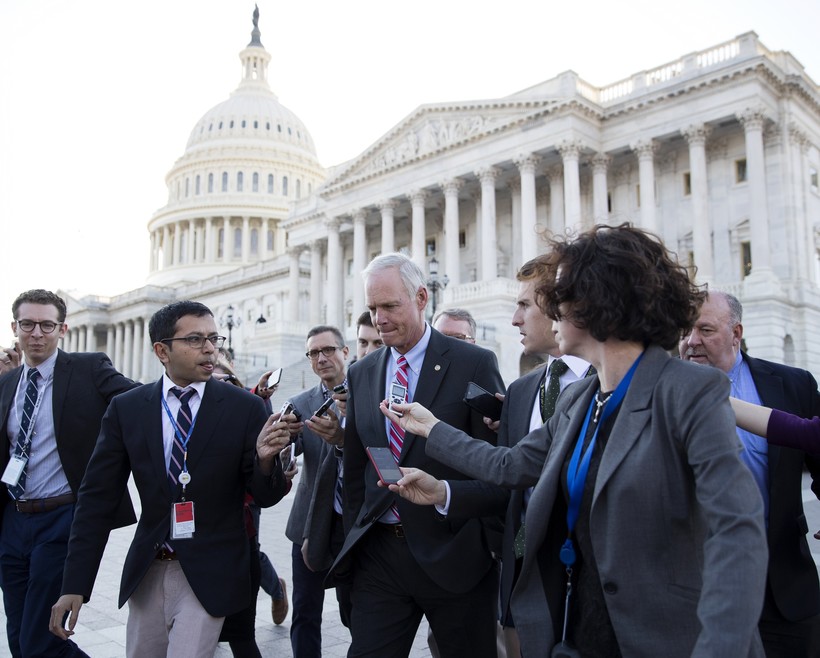 Sen. Ron Johnson, R-Wisconsin, is surrounded by media as he walks from the Capitol building on Capitol Hill in Washington, Wednesday, Nov. 29, 2017.

Wisconsin US Senator Expected To Be Crucial Deciding Vote
By Marylee Williams and The Associated Press
Share:

Republican U.S. Sen. Ron Johnson says he has cut a deal with Senate leadership and is prepared to cast the deciding 50th vote to pass the GOP tax overhaul bill.

If the Senate approves the sweeping legislation Friday, senators will go to the House to reconcile differences before final congressional approval. Senate Majority Leader Mitch McConnell told reporters Friday he believes Republicans have enough votes to pass the bill.

Johnson said Friday on the "Jay Weber Show" on WISN-AM in Milwaukee that he secured changes Thursday night in the bill on taxes paid by pass-through businesses that helped win his support.

Pass-through businesses are organized differently than corporations. In a pass-through, profits go directly to owners.

"A lot of the tax relief is going to the big C corps, and my problem has been not anywhere near an equitable amount is going to pass-throughs," he said on the radio show. "It's just been a real problem."

Johnson said he secured a 23 percent tax deduction for pass-through businesses instead of 17.4 percent. He said there will also be better transition rules for companies that are reorganizing. Johnson said the deal also gives him a role in the process of reconciling the Senate and House versions of the bill.

"I think that one of the more significant things for me is having a seat at the table as we conference this with the House on the treatment of pass-throughs, because obviously this is near and dear to my heart,” he said.

Johnson said he did the best that he could securing the tax deduction for pass-through businesses.

"I mean I wish I could say that I got it all, but I got as absolute much as I possibly could," he said.

Johnson also said Friday he's comfortable voting for the bill even though it's projected to worsen federal shortfalls by more than $1 trillion over the next decade.

He told reporters Friday he thinks the changes will stimulate the economy based on other analyses of the measure. Johnson has spent his career in the Senate sounding the alarm about growing the national debt.

But Johnson says the measure would provide "pro-growth tax reform."