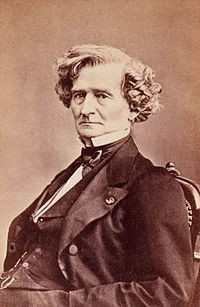 It Sounds All Right

Composer Hector Berlioz was born December 11, 1803, and cut a wide swath through music from the 1830s to the 1860s. In 1853 he became a best-selling author with Musical Evenings, a collection of reminiscences and anecdotes that reveal a good deal of Berlioz’ forceful personality and caustic sense of humor.

Berlioz tells the story of opera composer Gaspare Spontini, who had experienced some setbacks in Paris beginning in 1805, most notably the utter failure of a comic opera called The Little House which had culminated with a celebrated singer responding to hisses with “a gesture of scorn” that sparked a fracas between audience and orchestra.

In December 1807 Spontini was ready to try again with an opera called La Vestale, but professors and students at the Paris Conservatoire set about lampooning Spontini, saying that his melody lay on his accompaniment “like a handful of hair on a bowl of soup.”  Berlioz relates that “all these young note-spinners , who were about as capable of grasping and feeling greatness in music as the janitors, their fathers, were of judging literature and philosophy, banded together to bring about the downfall of La Vestale.”

During the opera, they intended to laugh and yawn, and at the end of the second act, to put on nightcaps and pretend to go to sleep. They were in for a surprise.

Although they later declared the first act very badly written, the conspirators were heard to say with astonishment, “It sounds all right.” With a particularly compelling temple scene, the second act kept them from bringing out the nightcaps, and the finale elicited their wholehearted applause.

Berlioz concludes the story by saying that the upstarts probably had to do penance the next day “by continuing to denigrate in their classes the ignorant Italian who had all the same moved them so deeply.”