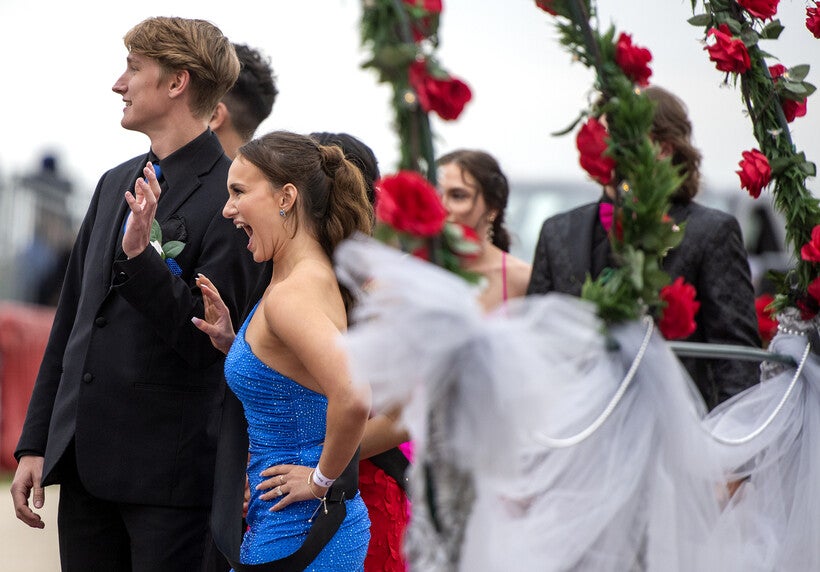 Union Grove High School student Allie Navin smiles and waves to the crowd as she walks the red carpet Saturday, May 21, 2022, during the Racine Rotary Post Prom at the Racine County Fairgrounds in Racine, Wis. Angela Major/WPR

'It seems so unreal': Seniors, grateful for the return of pre-COVID rituals, celebrate the Racine Rotary Post Prom

'Everybody’s looking healthy, and everybody’s able to enjoy this moment together,' says one senior
By Madeline Fox
Share:

The sky looked threateningly gray at points, but to the relief of the families in the stands and the students who had spent hours getting their hair, makeup and outfits just so, they stayed dry during the Racine Rotary’s Post Prom.

"It’s unfortunate that it rained today, so it might be a little bit muddy, but at least it’s not raining now," said Union Grove High School senior Emily Patterson.

Patterson came to the prom party hosted May 21 with a group of her friends, who are also seniors. Their high school was the first of nine to arrive at the Racine County Fairgrounds via motorcade, parking their cars in the grass and then strutting down a red carpet as family members cheered and music blared. It's part of one of the most elaborate community prom celebrations in the state -- one that's been the subject of a documentary film that labeled it "The World's Best Prom." And, for many in attendance, this year's event was even more special than usual. 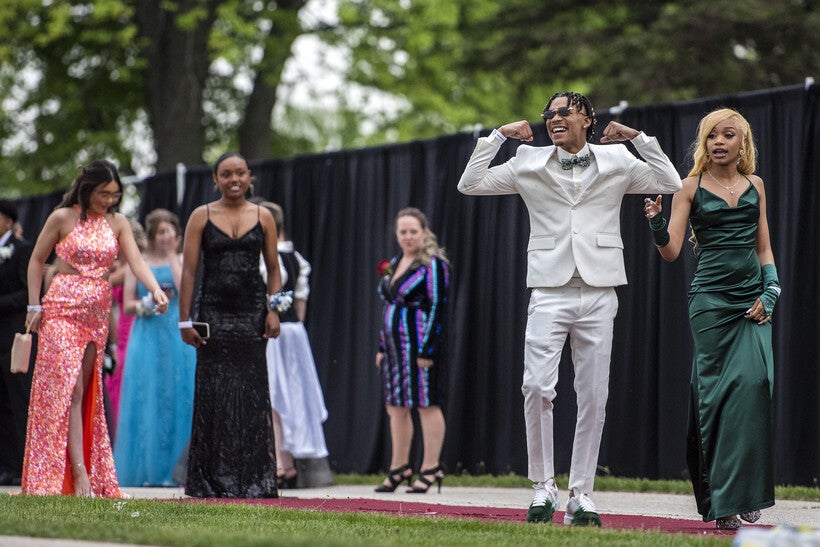 Racine Rotary Post Prom attendees pose as they walk the red carpet into the event Saturday, May 21, 2022, at the Racine County Fairgrounds in Racine, Wis. Angela Major/WPR

"It’s super awesome to be able to have all the schools still come together," Emily said. "There haven’t been very many events, especially because Union Grove isn’t really part of the Racine (group). We don’t usually play against these schools in sports, so we in Union Grove don’t usually get to go to events like this."

The event was delayed until August in 2020, and significantly pared down — students still had a motorcade and a red carpet, but the after party was virtual. Schools' individual proms were also canceled that year.

In 2021, the Rotary event was back to a full party, but with masks.

This year, with COVID-19 mostly out of mind for the night, hundreds of students in beautiful gowns and sharp suits celebrated prom night the same way their parents — and in some cases, grandparents — had been doing since 1953. 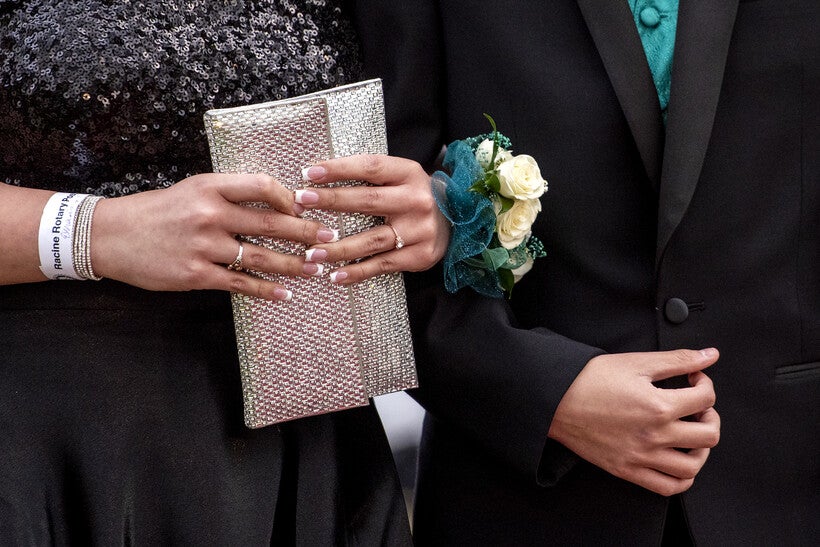 Attendees pose for a photo upon arrival at the Racine Rotary Post Prom on Saturday, May 21, 2022, at the Racine County Fairgrounds in Racine, Wis. Angela Major/WPR 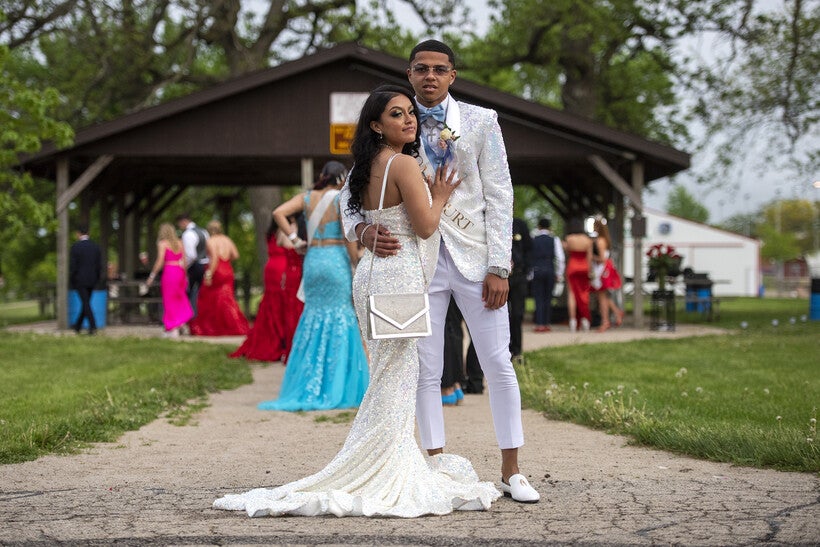 Nevaeh and her date, Alijah Matthews, attend the Racine Rotary Post Prom on Saturday, May 21, 2022, at the Racine County Fairgrounds in Racine, Wis. Angela Major/WPR

"Everybody’s looking healthy, and everybody’s able to enjoy this moment together after the pandemic and stuff, because there was one year that the class didn’t have a prom," said Nevaeh Inocencio-Martinez, a senior at St. Catherine’s High School in Racine. "We’re grateful that we did, and we really dressed up."

Nevaeh and her date, Alijah Matthews, wore matching glittering white outfits. He had a sparkling white suit jacket and gleaming shoes, while she wore a glistening white gown with a circular train that he carefully helped her arrange for photos.

"It was iridescent, so we just bought like glittery iridescent and hoped it matched. To be honest, it was really lucky," Alijah said. "It’s kind of good seeing everybody clean up. I’m so used to seeing them at school."

It’s a chance for families to celebrate their kids’ school year, as well, as most students had either just graduated or would do so in the coming weeks. Parents, cousins, grandparents and family friends started filling the bleachers that ran parallel to the red carpet an hour before the first school’s motorcade of prom-goers was scheduled to arrive.

Alicia Meshenky, whose son Wesley is a senior at Union Grove, sat with her friend Terri Esposito, whose daughter Malia was Wesley’s date. They arrived around 5:40 p.m., with Wesley’s school — the first on the schedule — set to show up at 6:30 p.m.

"I’m hoping to get good pictures," Meshenky said, laughing, "and cooperation from the kids."

Mom Sandra Evans, who also got to the fairgrounds well over an hour before her daughter's school was to arrive, made a sign with her daughter Genessa’s name on it so the Case High School senior would be able to see them from the stands. It was Sandra Evans’ first time at the community event.

Her niece Catherine, an elementary schooler, also weighed in. She had dressed up to be in the audience, wearing a ball gown and short high heels of her own.

"My favorite dress is Genessa's," she said. "She’s wearing a red dress, and it has gems on it, and she’s wearing makeup." 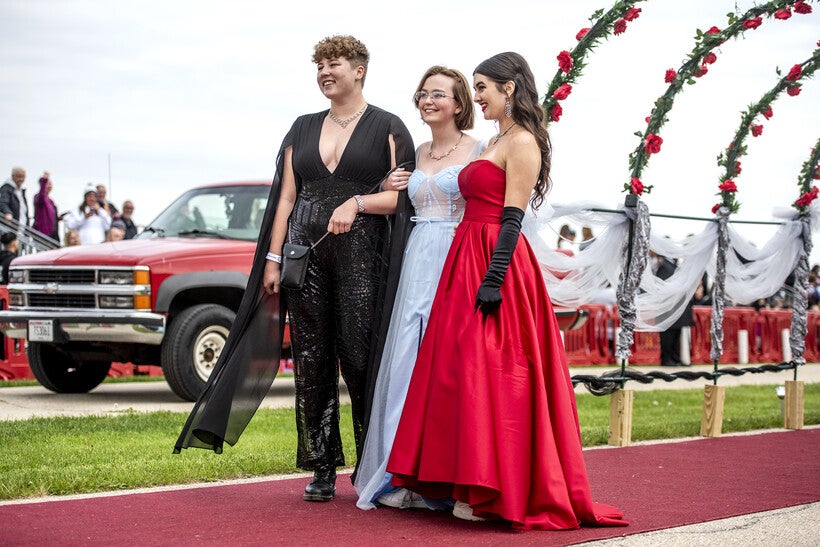 Emily, the Union Grove senior, got her long purple gown from the special occasion shop Windsor, same with her friend Grace Moore.

"It was the last one on the rack, so I had to squeeze into it no matter what, and .... I was so lucky I found it because there was nothing else," said Grace, a Union Grove senior, who paired the red gown with elbow-length black gloves.

Another of their senior friends from Union Grove, Bella Jensen, snagged a dress from Ross for $25, while their friend Maddie Goode got her black jumpsuit from "good old Amazon — Mr. Jeffrey Bezos coming in clutch."

Racine Lutheran High School seniors Bennett Wilks and Liliana Kading made one of the grander entrances of the evening, joining the motorcade in a 12-foot Case IH 580 Quadtrac tractor. Spectators in the bleachers cheered and rushed to the fence to take pictures of the towering ride.

"Our family farm is like 2 miles from here, so that was one of our tractors," Bennett said. "My dad was the one who gave me the idea last year after my brother had prom." 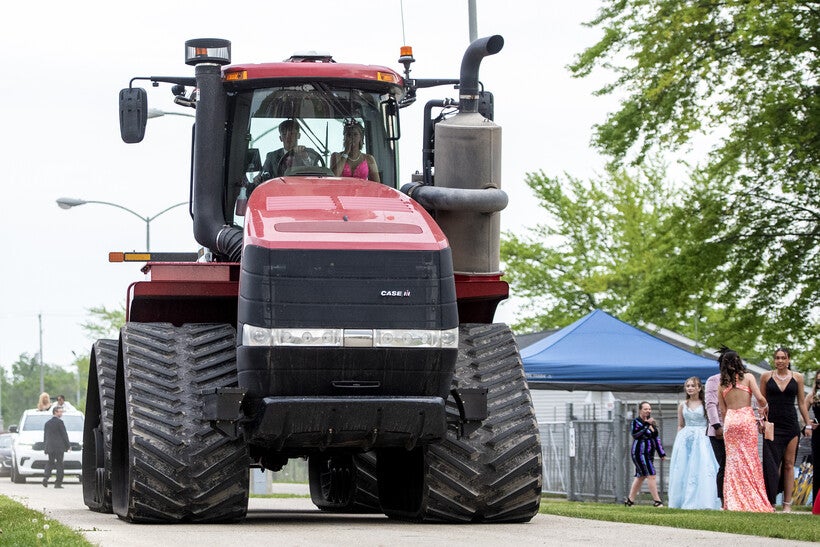 For decades, the Rotary Club has been putting on the post-prom event so students could celebrate after their school dances with students from other schools. The carefully substance-free event was prompted by the drunk driving deaths of several students in the 1950s. For years, it was held in downtown Racine — first at Memorial Hall, then Festival Hall. It was moved to the fairgrounds last year. A team of Rotary volunteers take tickets, direct traffic, check students for contraband and generally keep the event running smoothly.

Once students made it through the motorcade, they parked and then lined up to walk the red carpet and have their photos taken. Then, Rotary volunteers ran a metal-detection wand over them. Once inside the fairgrounds, another volunteer, Katie Humphrey, directed them toward a TV reporter and cameras nearby.

The Post Prom red carpet is aired live on TV, and a few reporters also talk to students as they come in.

"If they’re feeling shy, I kind of give some words of encouragement, because it’s a fun thing to do, and they’ll regret it if they don’t," Humphrey said. "(Their families) are all watching, waiting to see the people that they know." 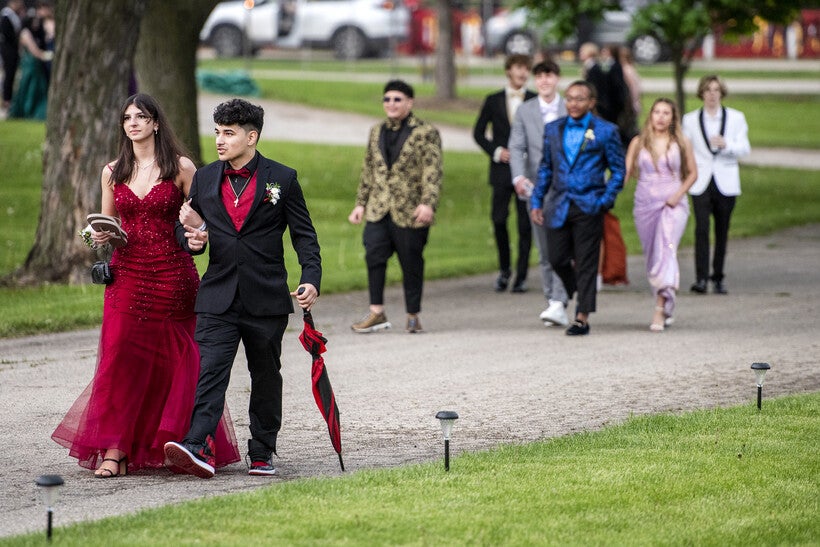 Once they’re through the spectator and media gauntlet and the security area, students can wander the outside part of the fairgrounds or duck inside two large buildings that have snacks, music, tables and a series of small sets where they could pose for photos.

In one building, prom-goers sang karaoke, including two girls who dueted Carrie Underwood’s "Before He Cheats."

"The smart ones have their tennis shoes on. These poor girls in their heels, you can see they’re in pain. They want to look great, and I hope they brought other shoes — some of them said they did, I’ve seen some swap-outs already," Humphrey said earlier in the evening.

Some wore Crocs or sneakers that were hidden under their long, full-skirted gowns, while others carried a pair for after the red carpet. A couple of hours in, the family friend of one teen boy passed a pair of sneakers over the fence to a Rotarian, who shepherded them the last 20 feet into the security area where the boy was helping his date, limping in tall heels. 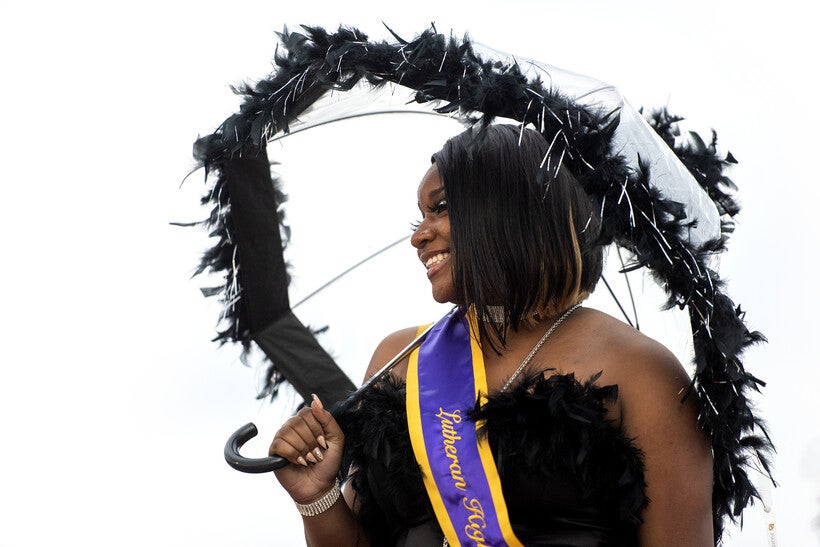 Mahree Bunch, a member of the Racine Lutheran prom court, smiles and poses for a photo as she walks the red carpet Saturday, May 21, 2022, at the Racine County Fairgrounds in Racine, Wis. Angela Major/WPR

For some families, this year’s Post Prom was a second chance after their older kids had missed out on some of the pomp and circumstance during the virtual event in 2020.

"That was my son’s prom, and they didn’t have one, so this is my first time down here," said Vivianne Augustus, who wore a Prom Squad shirt her sister made as she cheered on her daughter Asia, who wore a red dress and carried a clear umbrella with feather trim that she popped open for her red carpet picture.

That was a familiar feeling for some seniors who just graduated or are the cusp of leaving high school.