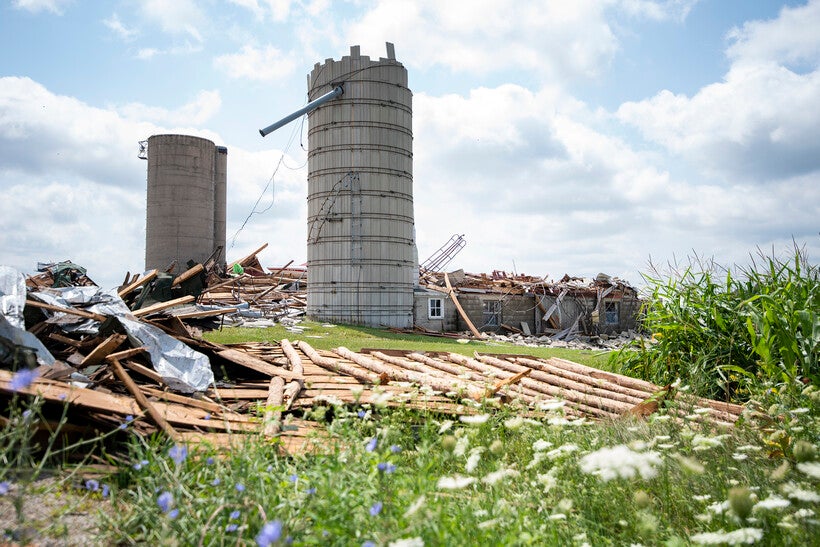 A beam and peg barn that was built 125 years ago is in pieces after being damaged by a storm Thursday, July 29, 2021, in the Town of Concord, Wis. Angela Major/WPR

'It Only Takes One Storm': Clean Up Begins After Widespread, Severe Storms

Wisconsinites Clean Up After Severe Storms Hit Much Of The State
By Corrinne Hess
Share:

Wild weather ranging from severe thunderstorms to possible tornadoes rolled across the state late Wednesday night and into Thursday morning, forcing people to seek shelter. Now, clean-up efforts are underway in central and southeastern Wisconsin where meteorologists say the damage was the most widespread.

Town of Concord resident Brian Neumann said within four minutes of getting the weather emergency alert on his phone, the storm hit.

"You hear stories about hearing a freight train — it was loud, it was scary, and I don’t know how else to describe it other than it was a little terrifying," Neumann said.

After the storm passed, Neumann assessed the damage to his property.

Two-thirds of his roof is missing. His apple tree is inside his neighbor’s shed. Many of his windows have been blown out and the overhang of his front porch is down.

But Neumann’s in-laws have it worse. His father-in-law, Lloyd Zastrow, who lives next door, lost a beam and peg barn that was built 125 years ago. 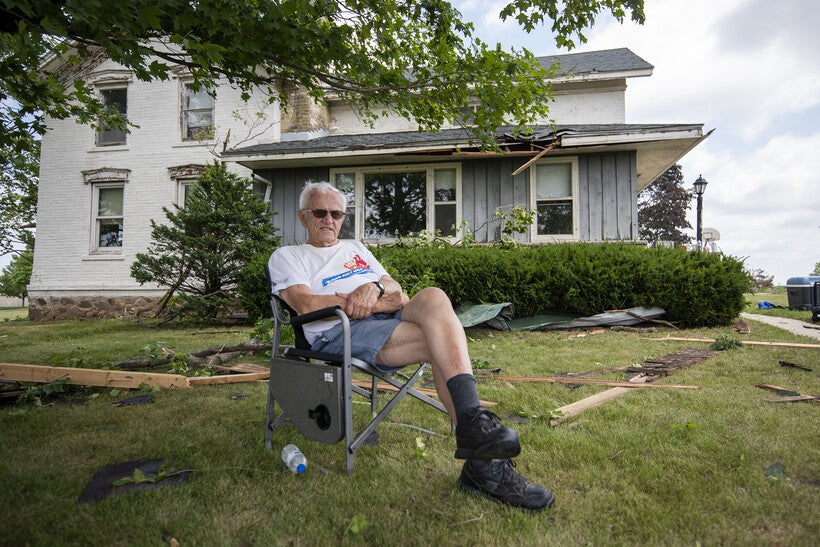 Lloyd Zastrow sits in front of his home which, along with a barn, was damaged in the storm Thursday, July 29, 2021, in the Town of Concord, Wis. Angela Major/WPR

"I was trying to preserve that, I've got lots of grandchildren, and their kids would someday have appreciated it, but they won't now," Zastrow said. "It sort of is what it is."

Neumann's brother-in-law’s house has been condemned.

Andy Boxell, a meteorologist with the National Weather Service in Milwaukee/Sullivan, said across southern Wisconsin, areas along the Interstate-94 corridor were hit hardest, particularly just south of Watertown and into western Waukesha County.

On Thursday morning, weather service crews were in the Town of Concord, between Johnson Creek and Oconomowoc, surveying damage. Boxell said he believes Neumann and other Concord residents experienced a tornado.

"It’s too soon to tell for sure, but particularly in the Concord area for sure, the damage is pretty clearly tornadic," he said. "At this point it’s just a matter of finding out where the tornado started and ended and what the strength rate of the tornado is." 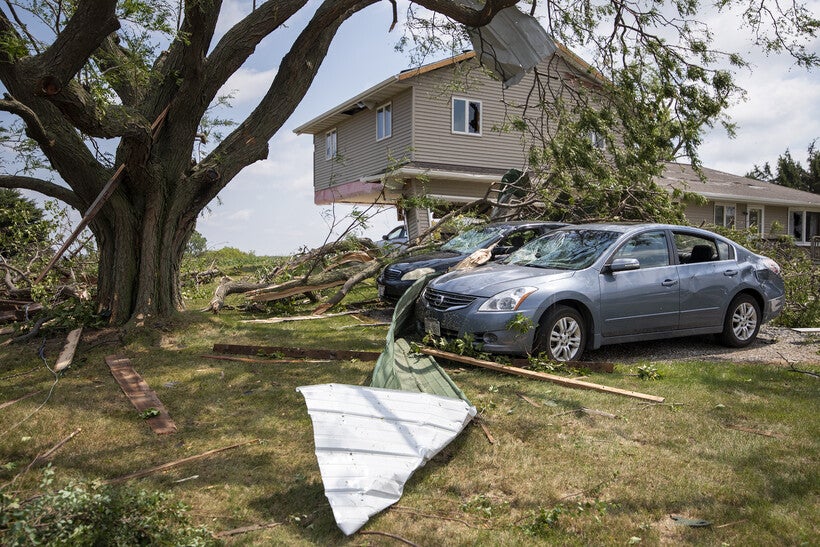 Vehicles in front of a home were damaged by a storm Thursday, July 29, 2021, in the Town of Concord, Wis. Angela Major/WPR

Wade Wilson, one of the owners of Lake Country Heating and Cooling, went to his Oconomowoc business around 2 a.m. Thursday. The roof on his pole building was gone, but the business was intact.

"I’m just happy no one is hurt, and we can keep rolling here," Wilson said.

"There is quite a bit of damage in Marathon County also in the Southwestern part of Winnebago County," Mamrosh said.

Wisconsin didn't get the much-anticipated derecho, which is a widespread windstorm associated with a fast-moving group of severe thunderstorms. Still, the strongest wind report was 78 mph south of Wausau, Mamrosh said. 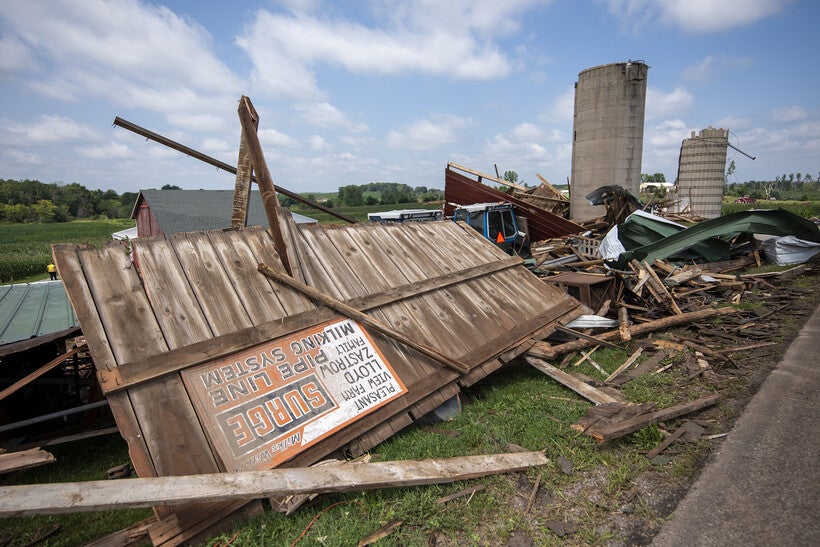 Pieces of Lloyd Zastrow’s family barn remain after a storm damaged it Thursday, July 29, 2021, in the Town of Concord, Wis. Angela Major/WPR

The storm was the first major weather event of the year, Boxell said, adding that the first severe thunderstorm warning was issued in June.

"A very slow start to the year, but we always remind folks it only takes one storm to cause significant damage and for some folks in Jefferson, Waukesha counties, last night was that one storm," Boxell, said.

"Last night's storms affected communities from the Mississippi River to Lake Michigan, leaving many regions with widespread damage," Evers said in a statement. "Wisconsinites are resilient, and I know first responders, utilities, and many across our state are working to respond today."

Evers' executive order directs state agencies to help those affected by the storms. It also allows the Wisconsin National Guard to be called to active duty, if necessary, to local authorities with their recovery efforts. 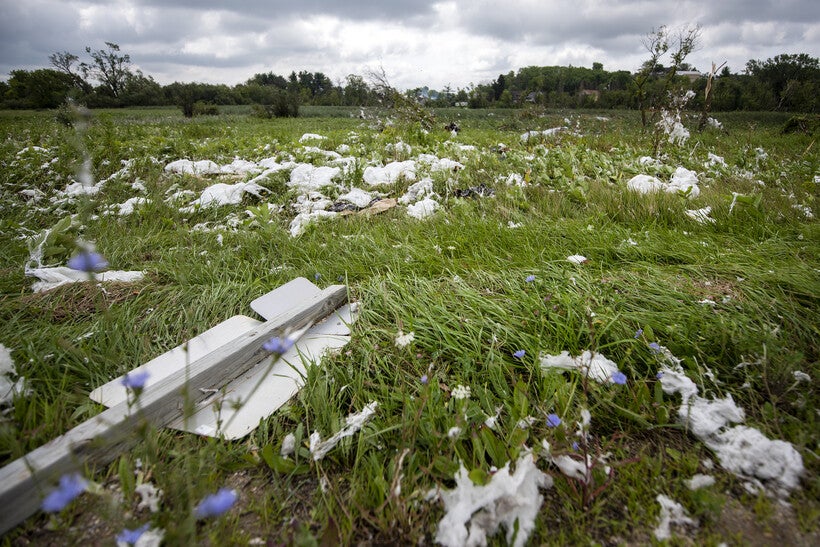 Insulation that flew out of a building from Lake Country Heating and Cooling is scattered across a field across the street from the business Thursday, July 29, 2021, in the Oconomowoc, Wis. Angela Major/WPR