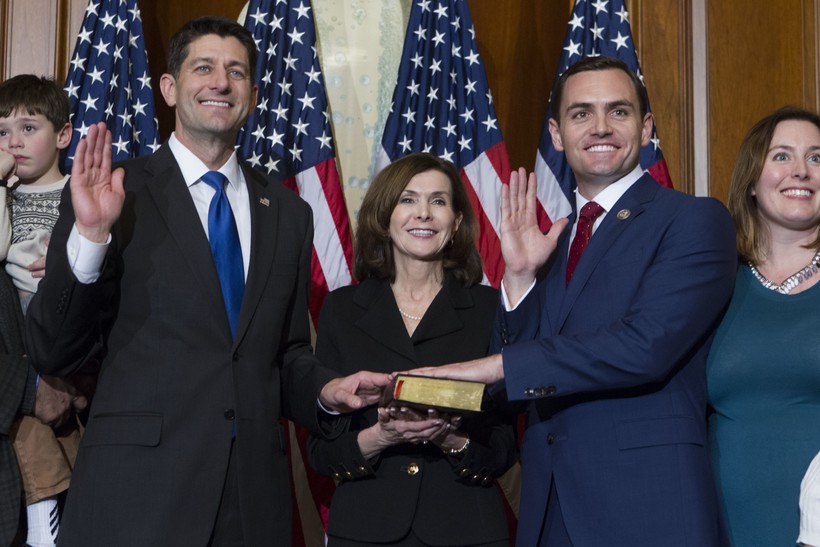 Is It Finally Time For Congressional Term Limits?

A bipartisan group of freshmen lawmakers in Washington, D.C., including U.S. Rep. Mike Gallagher of Wisconsin, is making a case for congressional term limits with a recent proposal.

Doing so would mean amending the U.S. Constitution — a steep fight that requiring two-thirds support from both the U.S. House and the Senate, as well as ratification by three-fourths of the states. This attempt follows many in the past that faced a stiff pushback.

"This is hardly new," said Melanie Zanona, a congressional reporter for The Hill. "We've seen this for years and years, it just hasn't really gone very far on Capitol Hill before."

The group of about half a dozen lawmakers — all under the age of 50 — say term limits will encourage younger generations, who don’t identify with the experience of having one job for decades, to go out and vote.

The most recent wave of calls for term limits came in 2010 with the Tea Party, and before that in 1994, when many Republicans elected to Congress made term limits part of their platform.

"Now, we are seeing this new resurgence, which is also made possible by the president himself, too," said Zanona. "It was really part of his 'drain the swamp' pledge, you know making sure that these Washington creatures don't stick around for a long time in his words, making sure that there's a lot of turnover."

But when you look closer at what term limits mean, that turnover isn't as simple as it sounds, according to Charley Jacobs, associate professor of political science at St. Norbert College.

"There are some institutional and structural factors that limit the ability of new candidates to rise, but take the state of Wisconsin as an example; more than 40 percent of the state (Assembly) seats are unopposed," he said.

Jacobs said term limits resurge every once in a while, typically when frustration with legislative inaction reaches a boiling point.

"This seems like such an elegant and simple fix, that it will in some way eradicate some significant problems both at the national and state level, and even the local level," he said. "But the difficulty is that we often don't have enough individuals to take their place and with the necessary knowledge of how the system works to do an effective job."

There’s a sense that when politicians stay too long, there’s corruption, Jacobs said. But term limits instead often lead to a shift in power dynamics between lawmakers and lobbyists, who end up having the upper hand in terms of institutional knowledge.

"There's a problem associated with that," he said. "You shift power towards the lobbyist and those with money because they understand how this system works and how to game it,"

Jordan Butcher, a Ph.D. candidate at the University of Missouri who is studying term limits, is also skeptical. If term limits at the state level are any indication of what they would look like on a national scale, they aren't effective in bringing fresh voices to power, she said.

"Based on my examination of 12 out of the 15 term-limited states ... it doesn't appear that we're going to drain the swamp," Butcher said. "It looks like people actually find a way to stay in the legislature because that's where they want to be."

While different states have different rules for term limits, many politicians navigate around those limits to find loopholes.

The most common type of limit is called a consecutive ban, she said. After a member has reached their set number of years, they are allowed to return after waiting an election cycle.

"When they are allowed to return, they'll come back to the same seat," Butcher said. "Or during their wait time of one election cycle will actually move to the other chamber and then, after they've waited, will go right back to their original seat, staying in the legislature the entire time."

One of the positive marks of term limits that Jacobs points to is the opportunity for women and racial and ethnic minorities to get into office.

"It's a double edged sword," he said. "If you get rid of (incumbents), then you have this opportunity for a new host of individuals who are more diverse to come in. But as you know there's a back door to that process which means these individuals who did get recruited to run get flushed out of the system."

Jacobs doesn't see the current proposal in Congress succeeding where others have failed.

"I doubt you're going to get the threshold number of individuals necessary to propose this as a constitutional amendment, which is the likely path you have to take," he said.

But if voters decide they want term limits to come into play, they would have to have very strict limits to work, Butcher said.

"However with term limits, we are losing a lot of expertise and knowledge," she said. "There are other things and other dynamics of government that would have to change in order for it to function normally."

The proposal's success hinges on who in Congress will support the effort, before it can even get the chance to move to the House floor, Zanona said.