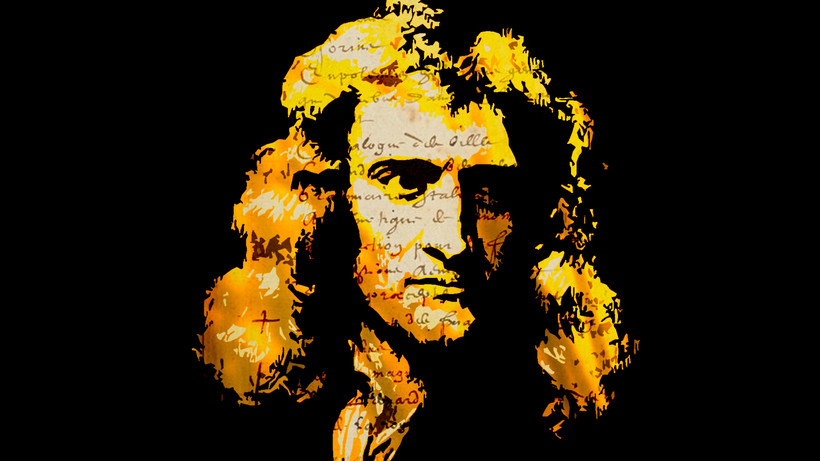 A Founder Of The Scientific Revolution, And Perhaps 'The Last Of The Magicians'
By Steve Paulson
Share:

Was alchemy science or magic? Perhaps both, depending on whom you ask. Medieval alchemists sought to transmute base metals into gold. Their holy grail was the "philosopher’s stone," a kind of wondrous substance that promised great riches and miraculous healing powers.

Today, alchemy is the stuff of legend and fantasy. But for historians, alchemy offers an intriguing glimpse into the origins of modern science.

Take Isaac Newton, one of the founders of the Scientific Revolution. He wrote more than a million words on alchemy over his lifetime, conducting decades' worth of alchemical experiments. But he did it all in secret. For centuries after his death in 1727, few people knew the extent of Newton’s alchemical work.

Finally, in 1936, most of Newton’s alchemical papers came up for auction. The famous economist John Maynard Keynes bought them and later declared that Newton "was not the first of the age of reason. He was the last of the magicians."

So why was Newton obsessed with alchemy?

The question fascinates Bill Newman, a professor of history and the philosophy of science at Indiana University. For decades, he's studied Newton’s alchemical notebooks and has even reproduced some of his experiments. Newman is the author of "Newton the Alchemist."

Steve Paulson: Why are you so interested in Newton's work on alchemy?

Bill Newman: There are a couple of different reasons. Ultimately, it boils down to the fact that Newton was possibly the greatest scientist who ever lived, and yet he spent upwards of three decades in a sort of obsessive alchemical quest. This is the guy who discovered the law of universal gravitation, co-invented calculus with (Gottfried Wilhelm) Leibniz and was the first person to figure out that white light is actually a mixture of unaltered spectral colors. The fact that he was so deeply involved in alchemy struck me as rather amazing.

SP: Why did he spend all this time on alchemy when it may not have contributed to his larger scientific project?

BN: I should point out that the term "alchemy" meant something different in the 17th century than what it means today. It wasn't just about the transmutation of base metals into gold — (it was) synonymous with chemistry, at least in this archaic 17th century spelling "chymistry."

One thing you have to bear in mind is that chymistry offered tremendous promise to people in the 17th century because they hadn't yet figured out the distinction between nuclear reactions and chemical reactions. So alchemy presented itself as a discipline that could make fundamental changes to matter — the most fundamental change to matter.

So for a man of Newton's intellect and desire to get to the bottom of nature, it really made perfect sense for him to be involved in alchemy.

SP: Yet he seemed to be very secretive about his work in alchemy.

BN: Well, it was considered dangerous to be an alchemist, particularly if word got around that you were successful at it. There are lots of stories about how alchemists were locked up by vindictive rulers who wanted to extract their secrets and wouldn't hesitate to use torture. And some of these stories are actually true.

For example, there was an alchemist in the early 18th century named Johann Friedrich Bottger, who was locked up by a Saxon ruler named August the Strong. And August actually managed to turn him away from his transmutation efforts so that he invented porcelain — at least the Western world's variety of it.

There were also alchemical charlatans who were playing the noble courts of Europe in the 16th and 17th centuries for all they were worth. And if they were exposed, the consequences could be quite grisly — they would typically be executed.

SP: Was alchemy considered a kind of magic?

BN: That’s an interesting question, which can get complicated and nuanced. But to Newton, at least, alchemy and magic were distinct. In his mind, I think magic was associated mostly with demonic magic.

There is yet another feature, though, which comes out in a letter that he wrote to Henry Oldenburg in 1676, who was the secretary of the Royal Society. Newton is very concerned about the fact that Robert Boyle, who is sometimes called the father of modern chemistry, was a devoted alchemist himself. Newton is concerned that Boyle has revealed too much about a so-called "sophic mercury," a kind of initial ingredient of the philosopher's stone. So Newton tells Oldenburg that he would like to commend Boyle to "high silence." He's really worried that word will get out.

Why? Because he's worried that scientific secrets of a really radical sort are going to be loosed upon the world and tremendous damage could occur.

SP: What was the "philosopher's stone"?

BN: It meant essentially two things. On the one hand, it was an agent that was thought to be able to transmute base metals into gold. They even have descriptions of it; it was typically thought to be a sort of ruby red material that was fusible in the heat. You added it to a molten metal and it would instantaneously transmute it into gold or, in some cases, silver.

Many people also thought the philosopher’s stone was a panacea and could also cure the human body of any sort of illness.

SP: What did Newton actually do in his alchemical experiments?

BN: It's a very complicated issue because we have more laboratory notebooks than we really know what to do with. They're also extremely difficult to understand because he never really tells you exactly what he's trying to do in the experiments.

For example, he refers to something that he calls the "green lion" in his experimental notebooks. Nobody's been able to figure out exactly what that meant to him. He talks about the "two serpents." He also talks about something called "sophic I've found is that Newton was trying to create more and more volatile compounds. He was trying to replicate processes that he believed to be taking place under the surface of the Earth. He had a theory that metals are being generated within the Earth. He calls it a sort of "cosmic vegetable." So the Earth is literally a living being and metals are constantly being produced within it. It involves heating up materials, vaporizing them and producing reactions in vaporous or even gaseous form.

SP: Was Newton successful in his experiments? Did he produce the results he hoped for?

BN: He clearly never found the philosopher's stone. But he produced extremely interesting compounds, and it looks like some of these materials have not been reproduced since Newton's day. So he was, in fact, finding really interesting stuff and he knew it.

SP: I get the impression that there was a whole culture of alchemy, with the riddles and the secrecy. Was it like a secret club?

BN: They certainly presented themselves as a sort of a secret club. The term "adept" was used for someone who had actually attained the philosopher's stone. They were considered to be a kind of superhuman — to be "the chosen sons of God."

SP: We haven't talked about Newton’s rather strange personality. Wasn’t he pretty arrogant? Apparently, he was not the nicest person to be around.

BN: Yeah, probably one of the least nice people to be around. Newton was a loner of an extremely unpleasant sort. When you got close to him, it was dangerous because he could turn on you.

Some of Newton's personality traits can be explained if you think of him as somebody trying to become an adept — an alchemical master — because the adepts were themselves the ultimate loners. They couldn't trust anyone because anyone you trusted might reveal that you have knowledge of the philosopher's stone, and then you'd wind up strangled in your bed because somebody wanted to steal it.

SP: So the fact that Newton didn't like a lot of people actually fit pretty well with this secretive life in alchemy.

BN: Yes, exactly. Also, the alchemist was supposed to be smarter than everybody else.

SP: And Newton had no doubt that he was smarter than everyone else.

BN: And he was right, actually! (laughs)