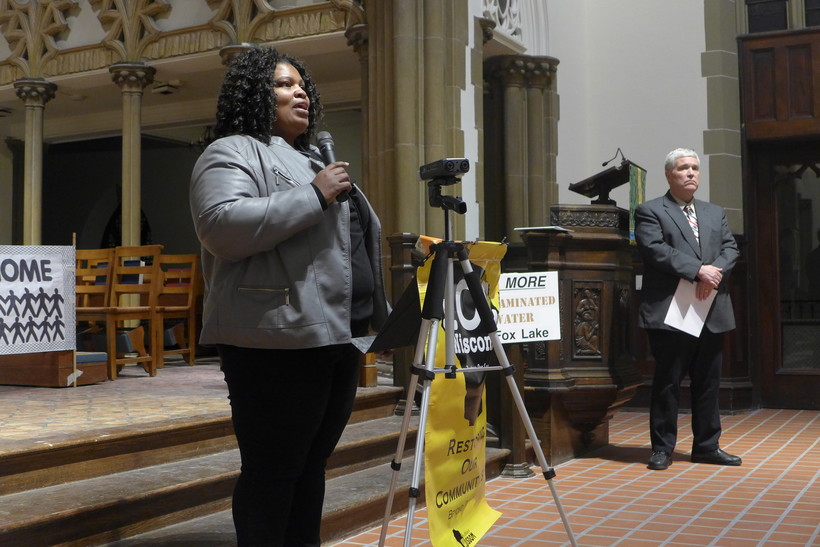 Beverly Walker, the wife of a Fox Lake inmate, speaks at a February meeting on prison reform organized by the nonprofit group WISDOM in Madison.

Inmates, Visitors And Staff Say Lead And Copper Contamination Is An Issue At Fox Lake, Waupun
By Gilman Halsted
Share:

Two years ago, the Fox Lake Correctional Institution near Beaver Dam reached an agreement with the Department of Natural Resources to eliminate copper and lead contamination in the prison’s water supply, but inmates, visitors and staff say the water is still unsafe to drink.

A report by the Wisconsin Center for Investigative Journalism cites testing data from the DNR showing lead and copper levels in the prison's water have exceeded federal standards in 18 samples over the past eight years. Prison officials said they’ve taken steps to fix the problem and have warned staff and inmates to run the water for 30 seconds before drinking it.

Beverly Walker said when she visits her husband, an inmate at Fox Lake, she’s found that doesn't work.

"The water can run for an hour or two and still come out dirty and cloudy with metal pieces floating in the water," Walker said. "The water is still not clean or safe."

Walker said inmates are allowed to buy a 12-pack of bottled water every two weeks, but many can't afford it.

"So what they do is they let it set until everything simmers to the bottom, and then they try to drink it real quick before the lead gets to the top," said Walker.

The WCIJ report cites documents showing water at the state prison in Waupun has also had lead and copper levels above acceptable health standards in nine tests between 2010 and 2015. The most recent test last September found levels eight times higher than required federal limits.

One correctional officer who has worked at Waupun for 22 years said the water has always been bad there, and that he always brings his own bottled water. Brian Cunningham also said DOC officials never provided staff the required warnings when the water tested high for lead or copper levels.

A federal judge in Madison has appointed attorneys for one Fox Lake inmate who is suing the DOC, claiming lead in the water has damaged his health. A hearing on the lawsuit is scheduled for next month.

The next compliance test for water quality at the Fox Lake prison is scheduled for this month.