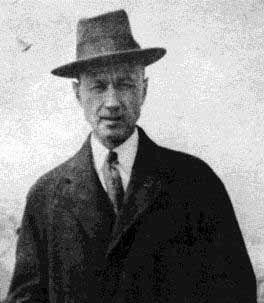 He was a major innovator in the insurance industry. He created the concept of estate planning and introduced the idea of training schools for insurance agents. When it came to composing music Charles Ives was also a mover and shaker, but followers were few.

In 1910, a business acquaintance talked the celebrated conductor Walter Damrosch into having the New York Symphony Orchestra play through parts of Ives' First Symphony during a rehearsal. Although he had misgivings, Ives needed to hear his music performed so he offered the second movement of his symphony for the exercise.

At first the playing went well.  A pretty tune prompted Damrosch to call out "Charming!"  But after awhile the orchestra ran into trouble and ground to a halt.  Damrosch changed some of the notes and the symphony continued.  They soon bogged down again though, and again--each time with Damrosch "correcting" the composer's notes.

At one passage Ives had put duple meter in one part and triple in another--a device used by Chopin, Schumann, and Brahms—Damrosch called out condescendingly, "You'll just have to make up your mind, young man!  Which do you want, a rhythm of two or a rhythm of three?"

A few years later, another friend--the assistant concert master of the New York Symphony--brought some orchestra members to Ives' Manhattan apartment to play his piece Washington's Birthday.  The musicians complained so much about one thing and another that Ives made cuts that included some of the best parts.  The only receptive member of the group was the viola player, who suggested the piece for one of the orchestra’s concerts—to which Ives’ friend replied, “No, we must think of the audience.”

When another friend asked the composer why he didn’t write music that people were sure to like, Ives answered, “I can’t do it!  I hear something else!”