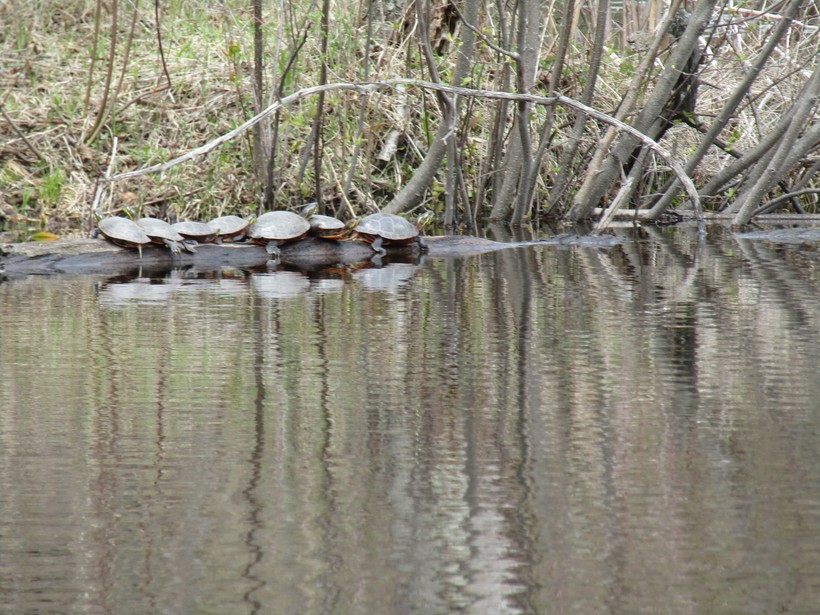 Painted turtles sun themselves on a log at Jordan Pond. An innovative turtle crossing has saved dozens of turtles' lives on Highway 66 near Stevens Point. Rob Mentzer/WPR

An Innovative Underpass Keeps Turtles Off The Highway. It's Saved Dozens From Becoming Roadkill.

The problem with the turtle underpass, at first, was that the turtles didn’t know it was a tunnel. Rather than a safe passage under the busy highway, turtles just saw a dark hole. It wasn’t very inviting, and few of them wanted to walk into it.

Biologist Pete Zani had the idea of adding shiny aluminum flashing at either end of the tunnel. The metal would reflect light that would show the turtles what they were looking at was, in fact, a way under the highway.

"From the turtle’s-eye view," Zani explained, "when they’re looking across they see sky, not dark green vegetation."

Zani and others installed the flashing, as well as grates above the tunnel on either side of the road to let some additional sunlight through. It worked. Turtles started to make their way under the road and have been using it ever since.

The tunnel, on the outskirts of Stevens Point, offers the creatures safe passage between a wetlands area and the Jordan Pond under the busy Highway 66. Installed in 2016, it’s the first of its kind in Wisconsin, a joint project of the state Department of Transportation, state Department of Natural Resources and the University of Wisconsin-Stevens Point.

The installation of the underpass and a short fence on either side of the highway has saved the lives of dozens of turtles, maybe hundreds. And it’s made the road safer for humans, too. 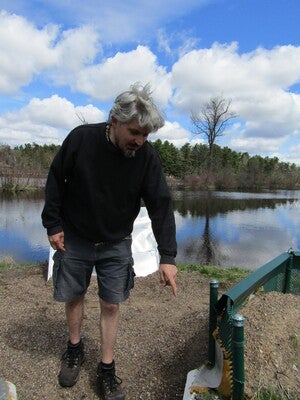 The speed limit on the highway is 55 mph. It’s trafficked by logging trucks, commuters and family cars on their way to the pond. Five years ago, it was a hotspot for turtle mortality, with 66 of them killed in one year. The DNR defines any place with more than 50 deaths to be a hotspot for turtle mortality. And this particular spot, a busy intersection next to a hydroelectric dam, presented additional safety risks.

"There are a lot of (traffic) conflicts without turtles being added to the mix," Zani said. "Now you add a 30-pound snapping turtle sitting in the middle of the roadway, not budging, and you have a problem."

Zani, a herpetologist and professor at UW-Stevens Point, got a call in 2014 about launching the turtle crossing project. With biologists from the two state departments, he helped design not just the tunnel and the fencing but also a study that would track turtle mortality on the road.

The results are in. In April, Zani submitted his report to the state. It found that since 2016 construction, a total of 40 turtles have been killed on the road.

"We went from a really high number," Zani said of the 66 turtle deaths in 2015, "to something that in some years is barely reaching double digits."

A Team Of 'Turtle Wranglers' Tracked And Helped The Reptiles

Leah Egan, 22, is a biology student at UW-Stevens Point. For a summer job a couple of years ago, she worked as a professional turtle wrangler.

With a $25,000 grant from the state, Zani established the turtle-wrangling program. Students worked part-time during the summer checking the fences and roadway for turtles. Turtles' nesting season in Wisconsin is roughly from late-May to mid-July, but they are on the move later in the summer, too.

Another job of the turtle wranglers — the official job title — was to review trail camera images of the tunnel for evidence turtles were making the crossing.

"You got into a rhythm, just looking for any changes" in the photos captured by the trail cams, Egan said. "Sometimes you’d just see a leaf and think, 'Oh, it’s a turtle!' but it’s just a leaf blowing in the wind."

The cams captured something else, too. The underpass was a highway not just for turtles but also for small mammals of all sorts. There were rodents and house cats, mink, skunks, raccoons and other mammals. Beneath the highway, the underpass became another highway for wildlife. 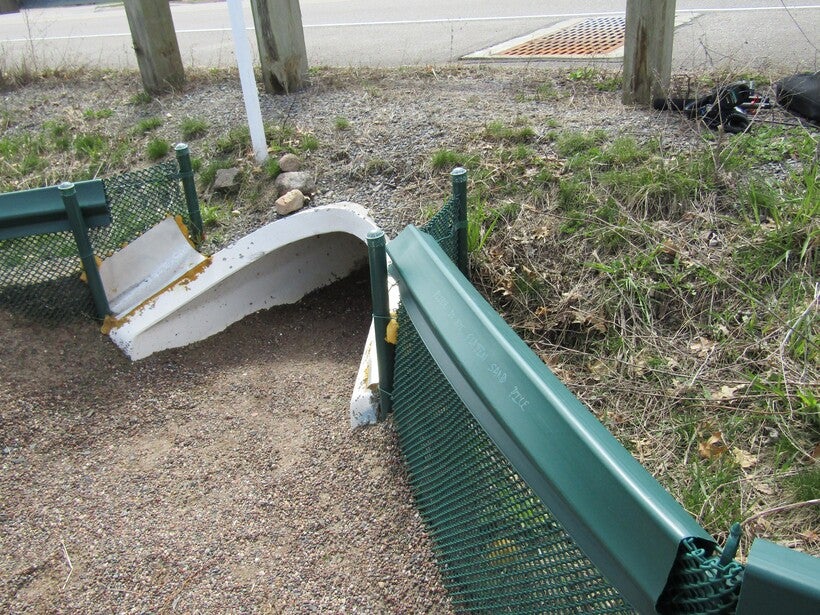 Egan said she enjoyed being able to work with the wildlife and help the project succeed. It was humans, she said, who got in the way in the first place.

"The turtles are crossing the highway because they’re trying to get to the river or to the pond or vice versa, and we built a road right in the middle of their path of travel," Egan said.

Herpetologist Zani has been fascinated by reptiles for his whole life. He grew up in eastern Ohio, just across the border from West Virginia. He recalls being out at his grandfather’s farm one day when he was 4 or 5 years old. His parents and his older siblings were ahead of him on the path.

"I caught — caught, not just found — an adult female snapping turtle that was on her nesting journey," Zani said, pausing before adding dryly, "My grandfather proceeded to make soup out of it."

The soup did not make an impression. He doesn’t think he ate any. His fascination with scaly animals, though, stuck. Today, Zani does his academic research on lizards in the high desert of eastern Oregon, where he spends his summers. He’s taught in Stevens Point for about seven years.

Zani’s role in the turtle crossing project was to design and oversee the scientific study that would show whether or not the tunnel was working. But he also tinkered with its design elements, adding features that would help the turtles. There was the addition of the reflective flashing. He also created a kind of loop or cul-de-sac at one point in the fence, designed to turn turtles who had missed the tunnel around.

He called it "turtle psychology." His task was to try to figure out what turtles want to do.

Turtles' eyes can see the polarization of light reflected off of open water. They see a kind of glow in the direction of a lake or a river and use it to navigate. That’s why, Zani said, simply turning them around with the fence’s cul-de-sac can prompt them to try the tunnel.

"They know the water’s that way," he said. "They can’t or don’t want to go away from the water, so that little loop of fencing is a turnaround designed just to get them back going in this direction. It works perfectly." 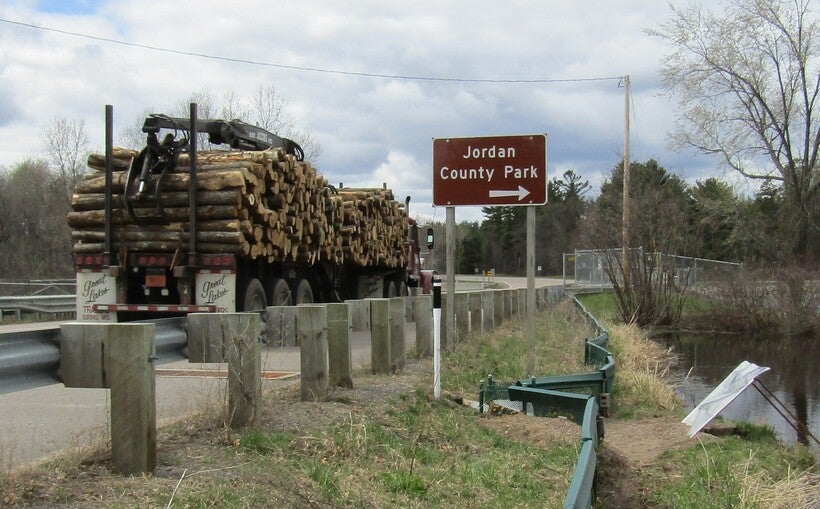 A logging truck passes over the turtle underpass on Highway 66 outside Stevens Point. Rob Mentzer/WPR

Another finding of the study: Though plenty of turtles use the tunnel, it doesn’t seem to be the case that more of them learn to use it from year to year.

"About 30 percent of the snapping turtles make it through, and something around 20 percent of painted turtles successfully make it through the tunnel," Zani said. "That hasn’t changed from year to year, so it doesn’t look like the turtles are learning the tunnel is the way to go. …They either get it or they don’t."

The state said the Portage County project was a pilot project. It also combined some unusual factors.

Wisconsin DOT biologist Alyssa Barrette, who has helped coordinate the project, said she doesn’t know of any plans to replicate the turtle tunnel elsewhere in the state. But she said her department is pleased with the results of the study.

Egan said working as a turtle wrangler was one of her favorite summer jobs. And she's always heartened, she said, when she sees people looking out for turtles.

"Since having this turtle wrangler job, even just driving on other highways or other trails, I see signs for turtle crossings (or) Facebook posts about helping turtles cross the road," Egan said. "It's great that people are spreading the word about not just hitting the turtle if it's in the middle of the road. ... We have to be more aware of their population."