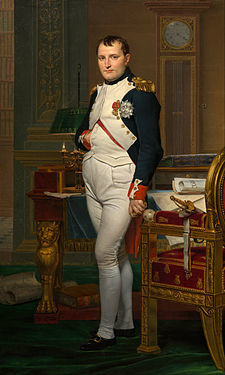 On the night of December 12, 1800, Napoleon Bonaparte was on his way to attend the first French performance of Haydn’s oratorio The Creation. He showed up late, but he had good excuse. Someone had tried to kill him.

Seven Breton royalist insurrectionists were in on the plot to assassinate Napoleon. They attached a large wine cask to a cart, and filled the cask with gunpowder, flammable materials, and bullets, which would be ignited with a long fuse. A similar arrangement had been designed and used more than two centuries earlier by an Italian engineer who called the device a machine infernale.

Conspirator Pierre Robinault de Saint-Régeant drove to the Place du Carousel looking for the right place for the infernal machine. He chose a place north of the Tuileries Palace, not far from where Napoleon’s troops had slaughtered royalist rebels in 1795.

They positioned a lookout at the Hotel Longuevieu, who would be able to see Napoleon’s carriage as it left the Tuileries Palace, and would signal Saint-Régeant, who would ignite the barrel of explosives by lighting the fuse.

At eight o’clock Napoleon rode in his carriage toward the Paris Opéra to attend The Creation. Preceding him was a cavalry escort. At the critical moment, the lookout lost his nerve and failed to signal Saint-Régeant to light the fuse. As the cavalry escort approached, Saint-Régeant lit the fuse and ran.

The infernal machine exploded, killing and injuring a number of bystanders. Napoleon continued on to the Opéra, where he received a standing ovation. He used the attempt to justify cracking down on all presumed plotters. Most of the conspirators and some innocent people were rounded up and executed.

A delegation from various Parisian societies visited Napoleon to congratulate him on his escape. Among them, representing the Paris Conservatory, was composer Luigi Cherubini, whose barbed responses to Napoleon’s music criticisms would not go unnoticed. That story on December 26.